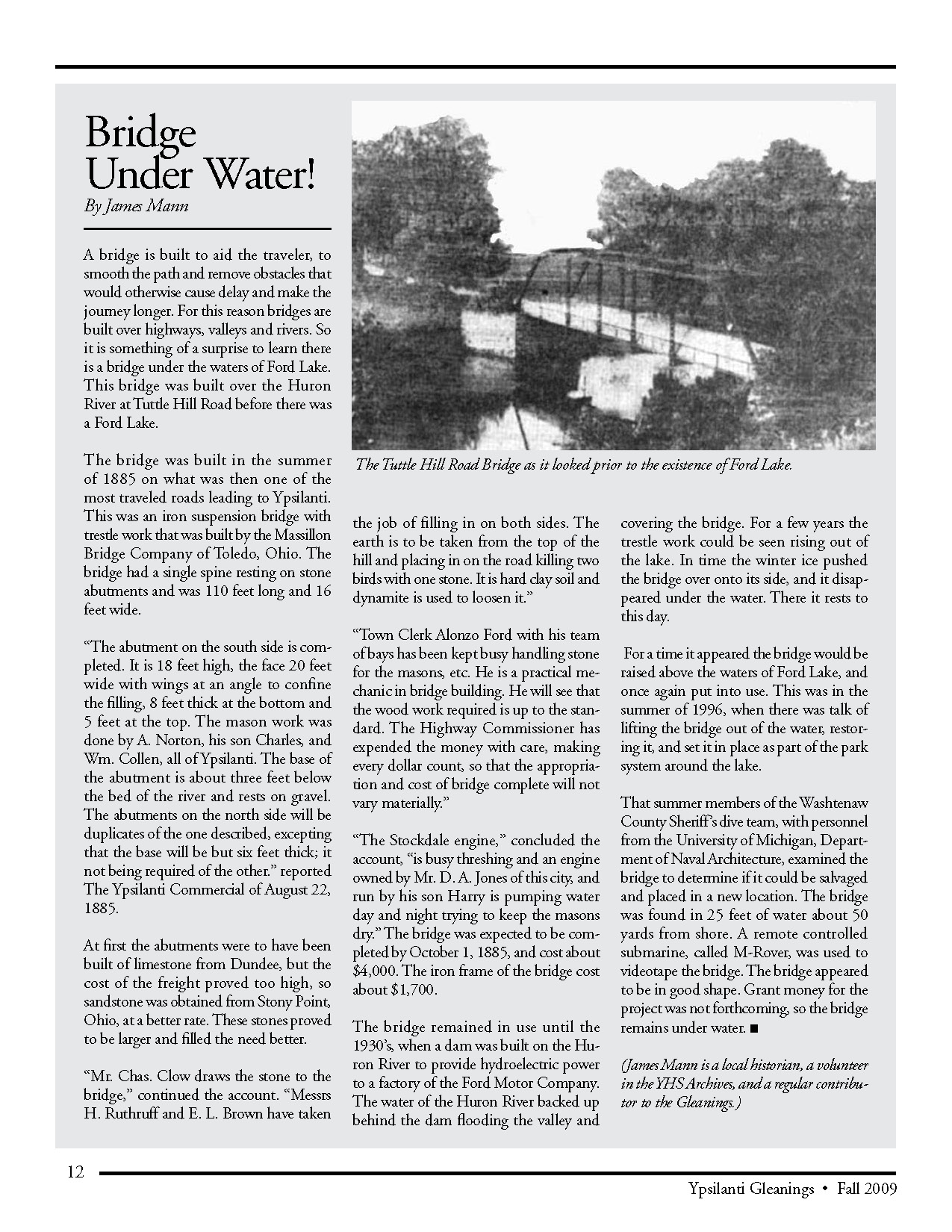 A bridge is built to aid the traveler, to smooth the path and remove obstacles that would otherwise cause delay and make the journey longer. For this reason bridges are built over highways, valleys and rivers. So it is something of a surprise to learn there is a bridge under the waters of Ford Lake. This bridge was built over the Huron River at Tuttle Hill Road before there was a Ford Lake. The bridge was built in the summer of 1885 on what was then one of the most traveled roads leading to Ypsilanti. This was an iron suspension bridge with trestle work that was built by the Massillon Bridge Company of Toledo, Ohio. The bridge had a single spine resting on stone abutments and was 110 feet long and 16 feet wide. “The abutment on the south side is completed. It is 18 feet high, the face 20 feet wide with wings at an angle to confine the filling, 8 feet thick at the bottom and 5 feet at the top. The mason work was done by A. Norton, his son Charles, and Wm. Collen, all of Ypsilanti. The base of the abutment is about three feet below the bed of the river and rests on gravel. The abutments on the north side will be duplicates of the one described, excepting that the base will be but six feet thick; it not being required of the other.” reported The Ypsilanti Commercial of August 22, 1885. At first the abutments were to have been built of limestone from Dundee, but the cost of the freight proved too high, so sandstone was obtained from Stony Point, Ohio, at a better rate. These stones proved to be larger and filled the need better. “Mr. Chas. Clow draws the stone to the bridge,” continued the account. “Messrs H. Ruthruff and E. L. Brown have taken the job of filling in on both sides. The earth is to be taken from the top of the hill and placing in on the road killing two birds with one stone. It is hard clay soil and dynamite is used to loosen it.” “Town Clerk Alonzo Ford with his team of bays has been kept busy handling stone for the masons, etc. He is a practical me- chanic in bridge building. He will see that the wood work required is up to the stan- dard. The Highway Commissioner has expended the money with care, making every dollar count, so that the appropria- tion and cost of bridge complete will not vary materially.” “The Stockdale engine,” concluded the account, “is busy threshing and an engine owned by Mr. D. A. Jones of this city, and run by his son Harry is pumping water day and night trying to keep the masons dry.” The bridge was expected to be completed by October 1, 1885, and cost about $4,000. The iron frame of the bridge cost about $1,700. The bridge remained in use until the 1930’s, when a dam was built on the Huron River to provide hydroelectric power to a factory of the Ford Motor Company. The water of the Huron River backed up behind the dam flooding the valley and covering the bridge. For a few years the trestle work could be seen rising out of the lake. In time the winter ice pushed the bridge over onto its side, and it disappeared under the water. There it rests to this day. For a time it appeared the bridge would be raised above the waters of Ford Lake, and once again put into use. This was in the summer of 1996, when there was talk of lifting the bridge out of the water, restoring it, and set it in place as part of the park system around the lake. That summer members of the Washtenaw County Sheriff’s dive team, with personnel from the University of Michigan, Department of Naval Architecture, examined the bridge to determine if it could be salvaged and placed in a new location. The bridge was found in 25 feet of water about 50 yards from shore. A remote controlled submarine, called M-Rover, was used to videotape the bridge. The bridge appeared to be in good shape. Grant money for the project was not forthcoming, so the bridge remains under water.
Photo caption: The Tuttle Bridge as it appeared prior to the existence of Ford Lake.

(James Mann is a local historian, a volunteer in the YHS Archives, and a regular contributor to the Gleanings.)