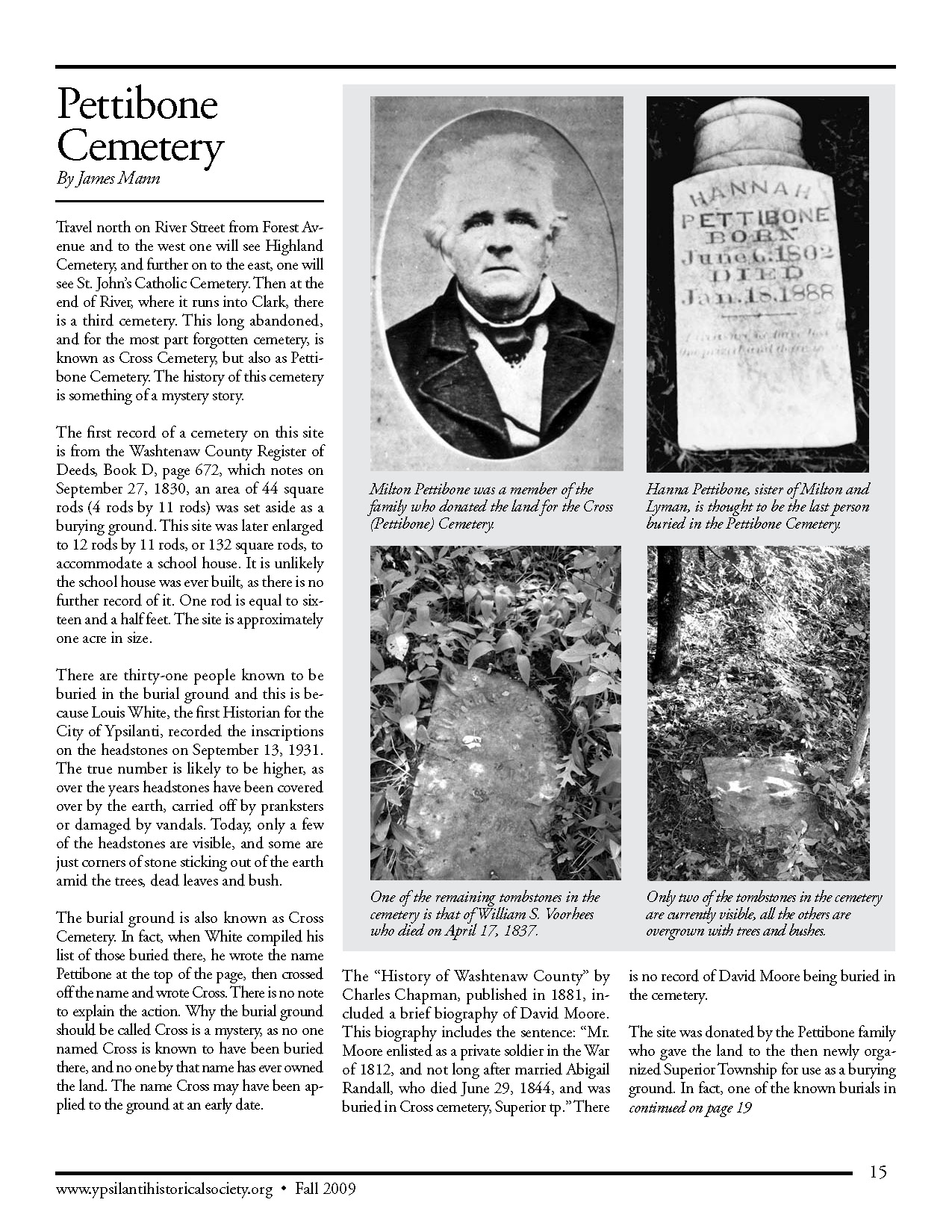 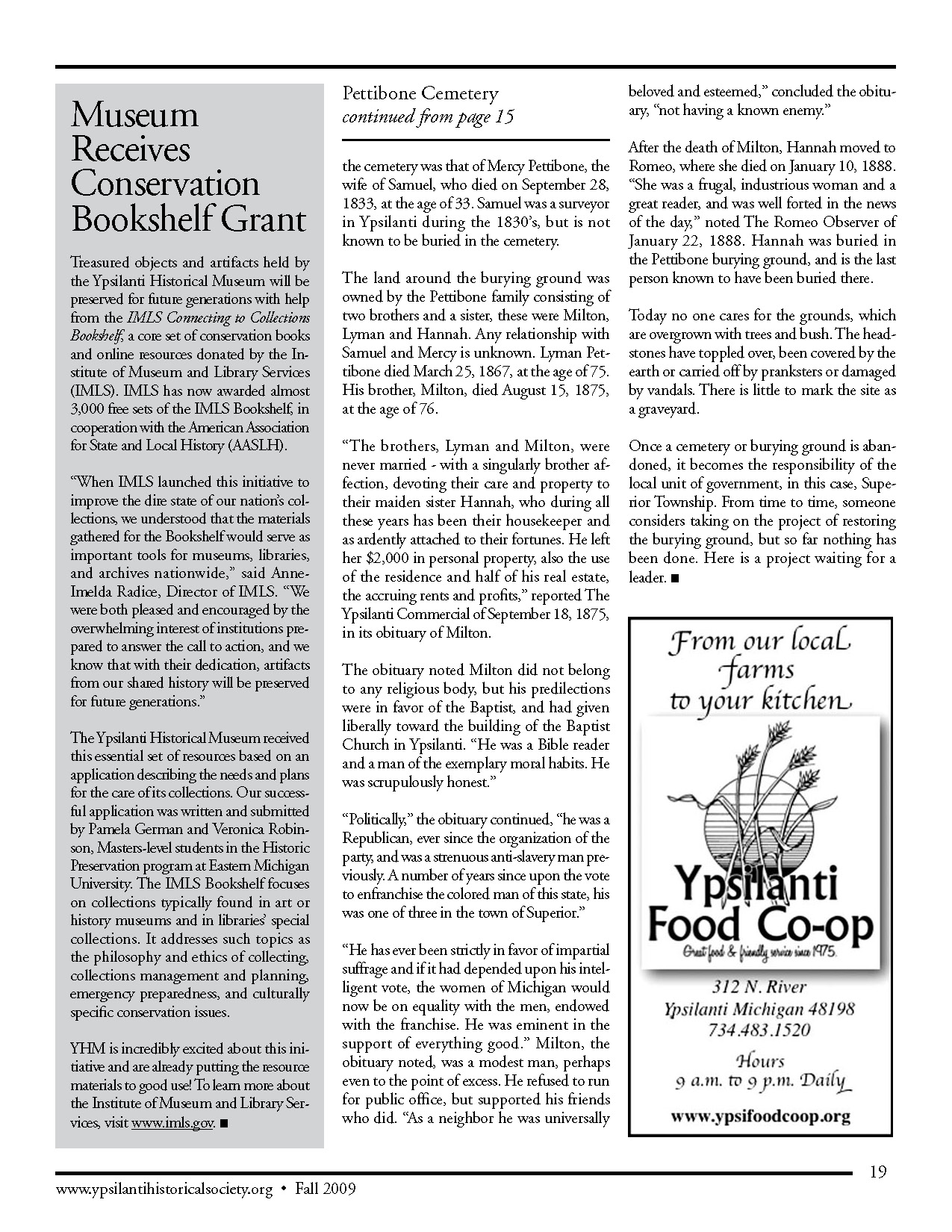 Travel north on River Street from Forest Avenue and to the west one will see Highland Cemetery, and further on to the east, one will see St. John’s Catholic Cemetery. Then at the end of River, where it runs into Clark, there is a third cemetery. This long abandoned, and for the most part forgotten cemetery, is known as Cross Cemetery, but also as Pettibone Cemetery. The history of this cemetery is something of a mystery story. The first record of a cemetery on this site is from the Washtenaw County Register of Deeds, Book D, page 672, which notes on September 27, 1830, an area of 44 square rods (4 rods by 11 rods) was set aside as a burying ground. This site was later enlarged to 12 rods by 11 rods, or 132 square rods, to accommodate a school house. It is unlikely the school house was ever built, as there is no further record of it. One rod is equal to sixteen and a half feet. The site is approximately one acre in size. There are thirty-one people known to be buried in the burial ground and this is because Louis White, the first Historian for the City of Ypsilanti, recorded the inscriptions on the headstones on September 13, 1931. The true number is likely to be higher, as over the years headstones have been covered over by the earth, carried off by pranksters or damaged by vandals. Today, only a few of the headstones are visible, and some are just corners of stone sticking out of the earth amid the trees, dead leaves and bush. The burial ground is also known as Cross Cemetery. In fact, when White compiled his list of those buried there, he wrote the name Pettibone at the top of the page, then crossed off the name and wrote Cross. There is no note to explain the action. Why the burial ground should be called Cross is a mystery, as no one named Cross is known to have been buried there, and no one by that name has ever owned the land. The name Cross may have been applied to the ground at an early date. The “History of Washtenaw County” by Charles Chapman, published in 1881, included a brief biography of David Moore. This biography includes the sentence: “Mr. Moore enlisted as a private soldier in the War of 1812, and not long after married Abigail Randall, who died June 29, 1844, and was buried in Cross cemetery, Superior tp.” There is no record of David Moore being buried in the cemetery. The site was donated by the Pettibone family who gave the land to the then newly organized Superior Township for use as a burying ground. In fact, one of the known burials in the cemetery was that of Mercy Pettibone, the wife of Samuel, who died on September 28, 1833, at the age of 33. Samuel was a surveyor in Ypsilanti during the 1830’s, but is not known to be buried in the cemetery. The land around the burying ground was owned by the Pettibone family consisting of two brothers and a sister, these were Milton, Lyman and Hannah. Any relationship with Samuel and Mercy is unknown. Lyman Pettibone died March 25, 1867, at the age of 75. His brother, Milton, died August 15, 1875, at the age of 76. “The brothers, Lyman and Milton, were never married - with a singularly brother affection, devoting their care and property to their maiden sister Hannah, who during all these years has been their housekeeper and as ardently attached to their fortunes. He left her $2,000 in personal property, also the use of the residence and half of his real estate, the accruing rents and profits,” reported The Ypsilanti Commercial of September 18, 1875, in its obituary of Milton. The obituary noted Milton did not belong to any religious body, but his predilections were in favor of the Baptist, and had given liberally toward the building of the Baptist Church in Ypsilanti. “He was a Bible reader and a man of the exemplary moral habits. He was scrupulously honest.” “Politically,” the obituary continued, “he was a Republican, ever since the organization of the party, and was a strenuous anti-slavery man previously. A number of years since upon the vote to enfranchise the colored man of this state, his was one of three in the town of Superior.” “He has ever been strictly in favor of impartial suffrage and if it had depended upon his intelligent vote, the women of Michigan would now be on equality with the men, endowed with the franchise. He was eminent in the support of everything good.” Milton, the obituary noted, was a modest man, perhaps even to the point of excess. He refused to run for public office, but supported his friends who did. “As a neighbor he was universally beloved and esteemed,” concluded the obituary, “not having a known enemy.” After the death of Milton, Hannah moved to Romeo, where she died on January 10, 1888. “She was a frugal, industrious woman and a great reader, and was well forted in the news of the day,” noted The Romeo Observer of January 22, 1888. Hannah was buried in the Pettibone burying ground, and is the last person known to have been buried there. Today no one cares for the grounds, which are overgrown with trees and bush. The headstones have toppled over, been covered by the earth or carried off by pranksters or damaged by vandals. There is little to mark the site as a graveyard. Once a cemetery or burying ground is abandoned, it becomes the responsibility of the local unit of government, in this case, Superior Township. From time to time, someone considers taking on the project of restoring the burying ground, but so far nothing has been done. Here is a project waiting for a leader. (James Mann is a local historian, a volunteer in the YHS Archives, and a regular contributor to the Gleanings.) Photo Captions: Photo 1: Milton Pettibone was a member of the family who donated the land for the Cross (Pettibone) Cemetery.

Photo 2: Hanna Pettibone, sister of Milton and Lyman, is thought to be the last person buried in the Pettibone Cemetery.

Photo 3: One of the remaining tombstones in the cemetery is that of William S. Voorhees who died on April 17, 1837.

Photo 4: Only two of the tombstones in the cemetery are currently visible, all the others are overgrown with trees and bushes.