The Roosevelt HS Class of 1959 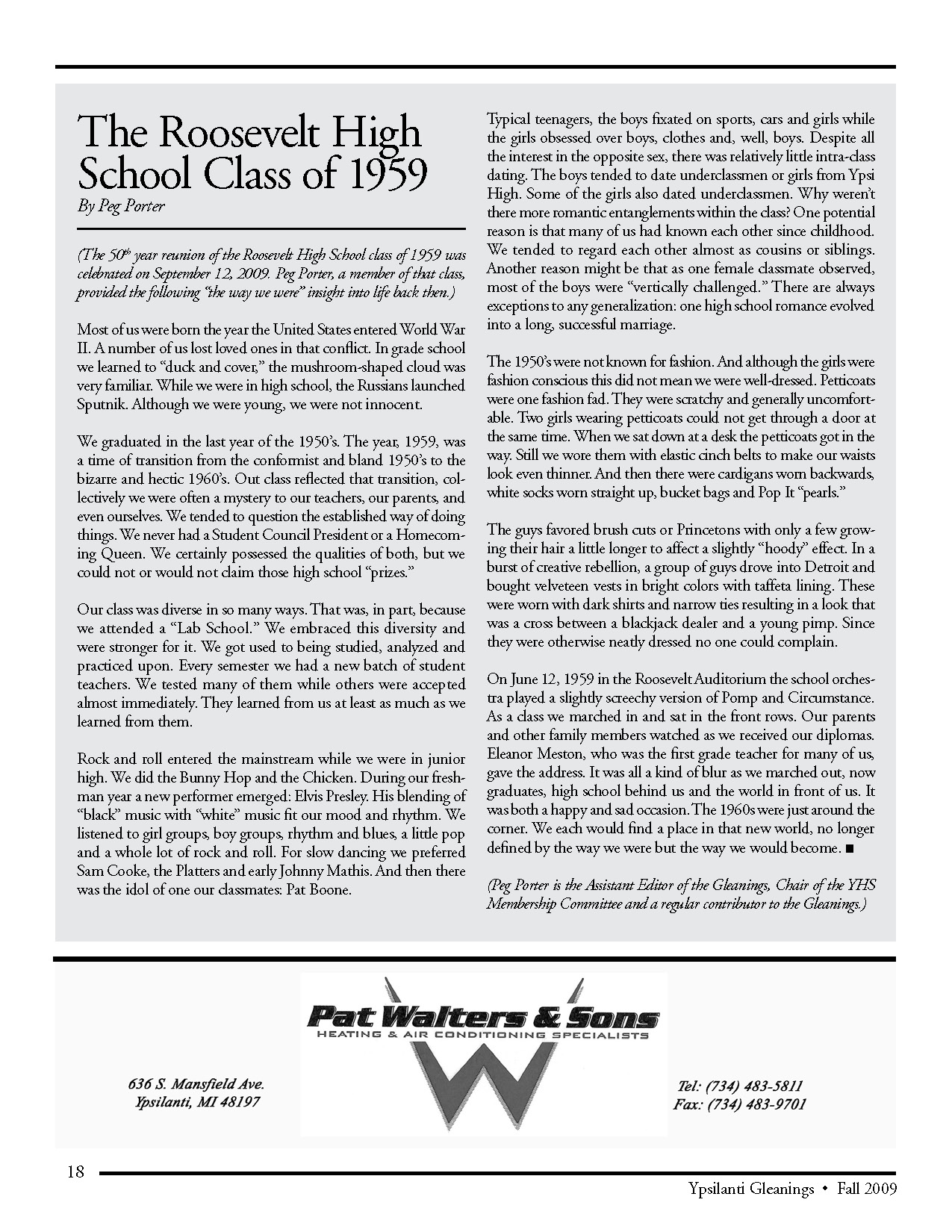 (The 50th year reunion of the Roosevelt High School class of 1959 was celebrated on September 12, 2009. Peg Porter, a member of that class, provided the following “the way we were” insight into life back then.)

Most of us were born the year the United States entered World War II. A number of us lost loved ones in that conflict. In grade school we learned to “duck and cover,” the mushroom-shaped cloud was very familiar. While we were in high school, the Russians launched Sputnik. Although we were young, we were not innocent.

We graduated in the last year of the 1950’s. The year, 1959, was a time of transition from the conformist and bland 1950’s to the bizarre and hectic 1960’s. Out class reflected that transition, collectively we were often a mystery to our teachers, our parents, and even ourselves. We tended to question the established way of doing things. We never had a Student Council President or a Homecoming Queen. We certainly possessed the qualities of both, but we could not or would not claim those high school “prizes.”

Our class was diverse in so many ways. That was, in part, because we attended a “Lab School.” We embraced this diversity and were stronger for it. We got used to being studied, analyzed and practiced upon. Every semester we had a new batch of student teachers. We tested many of them while others were accepted almost immediately. They learned from us at least as much as we learned from them.

Rock and roll entered the mainstream while we were in junior high. We did the Bunny Hop and the Chicken. During our freshman year a new performer emerged: Elvis Presley. His blending of “black” music with “white” music fit our mood and rhythm. We listened to girl groups, boy groups, rhythm and blues, a little pop and a whole lot of rock and roll. For slow dancing we preferred Sam Cooke, the Platters and early Johnny Mathis. And then there was the idol of one our classmates: Pat Boone.

Typical teenagers, the boys fixated on sports, cars and girls while the girls obsessed over boys, clothes and, well, boys. Despite all the interest in the opposite sex, there was relatively little intra-class dating. The boys tended to date underclassmen or girls from Ypsi High. Some of the girls also dated underclassmen. Why weren't there more romantic entanglements within the class? One potential reason is that many of us had known each other since childhood. We tended to regard each other almost as cousins or siblings. Another reason might be that as one female classmate observed, most of the boys were "vertically challenged." There are always exceptions to any generalization: one high school romance evolved into a long, successful marriage.

The 1950's were not known for fashion. And although the girls were fashion conscious this did not mean we were well-dressed. Petticoats were one fashion fad. They were scratchy and generally uncomfortable. Two girls wearing petticoats could not get through a door at the same time. When we sat down at a desk the petticoats got in the way. Still we wore them with elastic cinch belts to make our waists look even thinner. And then there were cardigans worn backwards, white socks worn straight up, bucket bags and Pop It "pearls."

The guys favored brush cuts or Princetons with only a few growing their hair a little longer to affect a slightly "hoody" effect. In a burst of creative rebellion, a group of guys drove into Detroit and bought velveteen vests in bright colors with taffeta lining. These were worn with dark shirts and narrow ties resulting in a look that was a cross between a blackjack dealer and a young pimp. Since they were otherwise neatly dressed no one could complain.

On June 12, 1959 in the Roosevelt Auditorium the school orchestra played a slightly screechy version of Pomp and Circumstance. As a class we marched in and sat in the front rows. Our parents and other family members watched as we received our diplomas. Eleanor Meston, who was the first grade teacher for many of us, gave the address. It was all a kind of blur as we marched out, now graduates, high school behind us and the world in front of us. It was both a happy and sad occasion. The 1960s were just around the corner. We each would find a place in that new world, no longer defined by the way we were but the way we would become.

(Peg Porter is the Assistant Editor of the Gleanings, Chair of the YHS Membership Committee and a regular contributor to the Gleanings.)