A Man Lives as Long as He is Remembered: The Headstone of Private Barlow Simonds 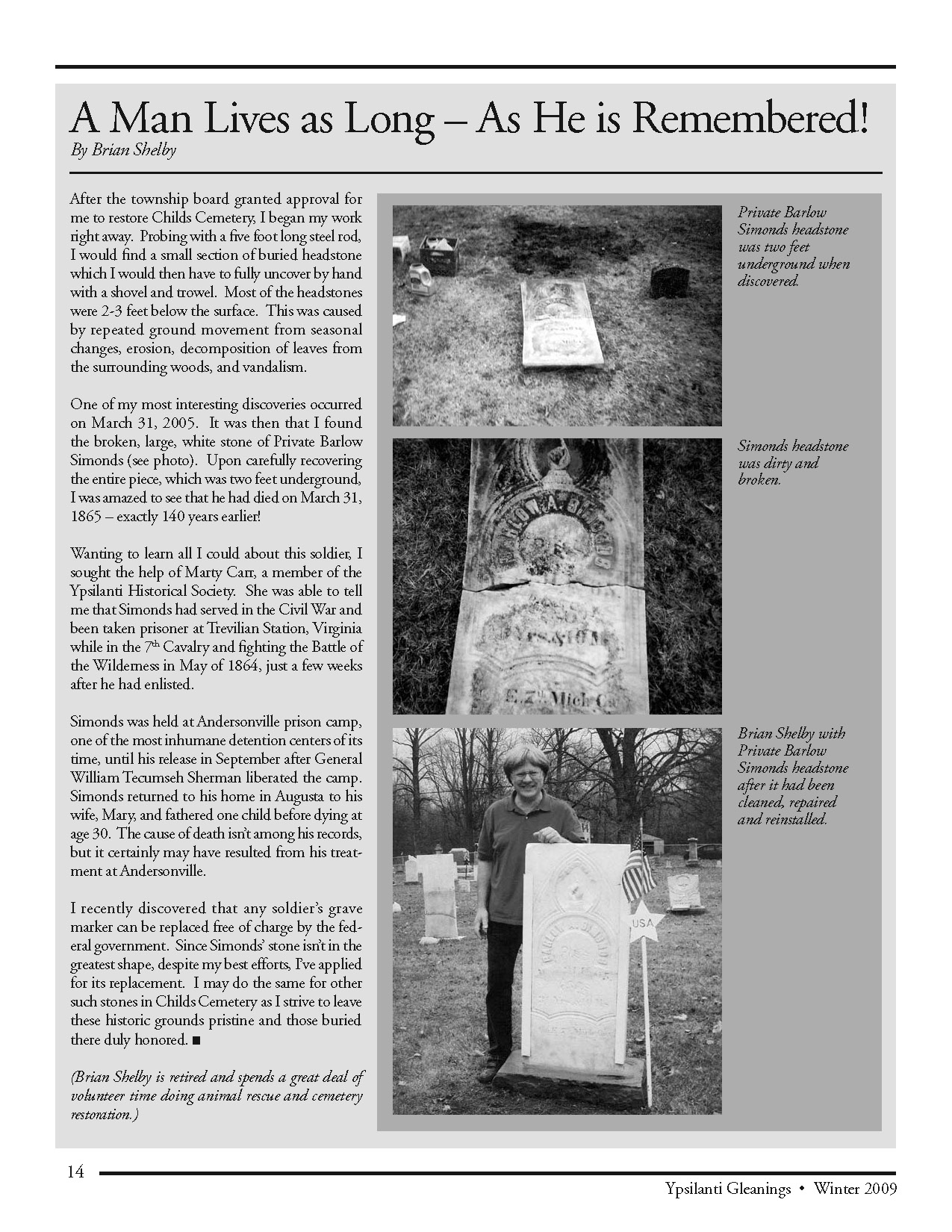 After the township board granted approval for me to restore Childs Cemetery, I began my work right away. Probing with a five foot long steel rod, I would find a small section of buried headstone which I would then have to fully uncover by hand with a shovel and trowel. Most of the headstones were 2-3 feet below the surface. This was caused by repeated ground movement from seasonal changes, erosion, decomposition of leaves from the surrounding woods, and vandalism. One of my most interesting discoveries occurred on March 31, 2005. It was then that I found the broken, large, white stone of Private Barlow Simonds (see photo). Upon carefully recovering the entire piece, which was two feet underground, I was amazed to see that he had died on March 31, 1865 – exactly 140 years earlier! Wanting to learn all I could about this soldier, I sought the help of Marty Carr, a member of the Ypsilanti Historical Society. She was able to tell me that Simonds had served in the Civil War and been taken prisoner at Trevilian Station, Virginia while in the 7th Cavalry and fighting the Battle of the Wilderness in May of 1864, just a few weeks after he had enlisted. Simonds was held at Andersonville prison camp, one of the most inhumane detention centers of its time, until his release in September after General William Tecumseh Sherman liberated the camp. Simonds returned to his home in Augusta to his wife, Mary, and fathered one child before dying at age 30. The cause of death isn’t among his records, but it certainly may have resulted from his treatment at Andersonville. I recently discovered that any soldier’s grave marker can be replaced free of charge by the federal government. Since Simonds’ stone isn’t in the greatest shape, despite my best efforts, I’ve applied for its replacement. I may do the same for other such stones in Childs Cemetery as I strive to leave these historic grounds pristine and those buried there duly honored. (Brian Shelby is retired and spends a great deal of volunteer time doing animal rescue and cemetery restoration.) Photo Captions: Photo 1: Private Barlow Simonds headstone was two feet underground when discovered.

Photo 3: Brian Shelby with Private Barlow Simonds headstone after it had been cleaned, repaired and reinstalled.