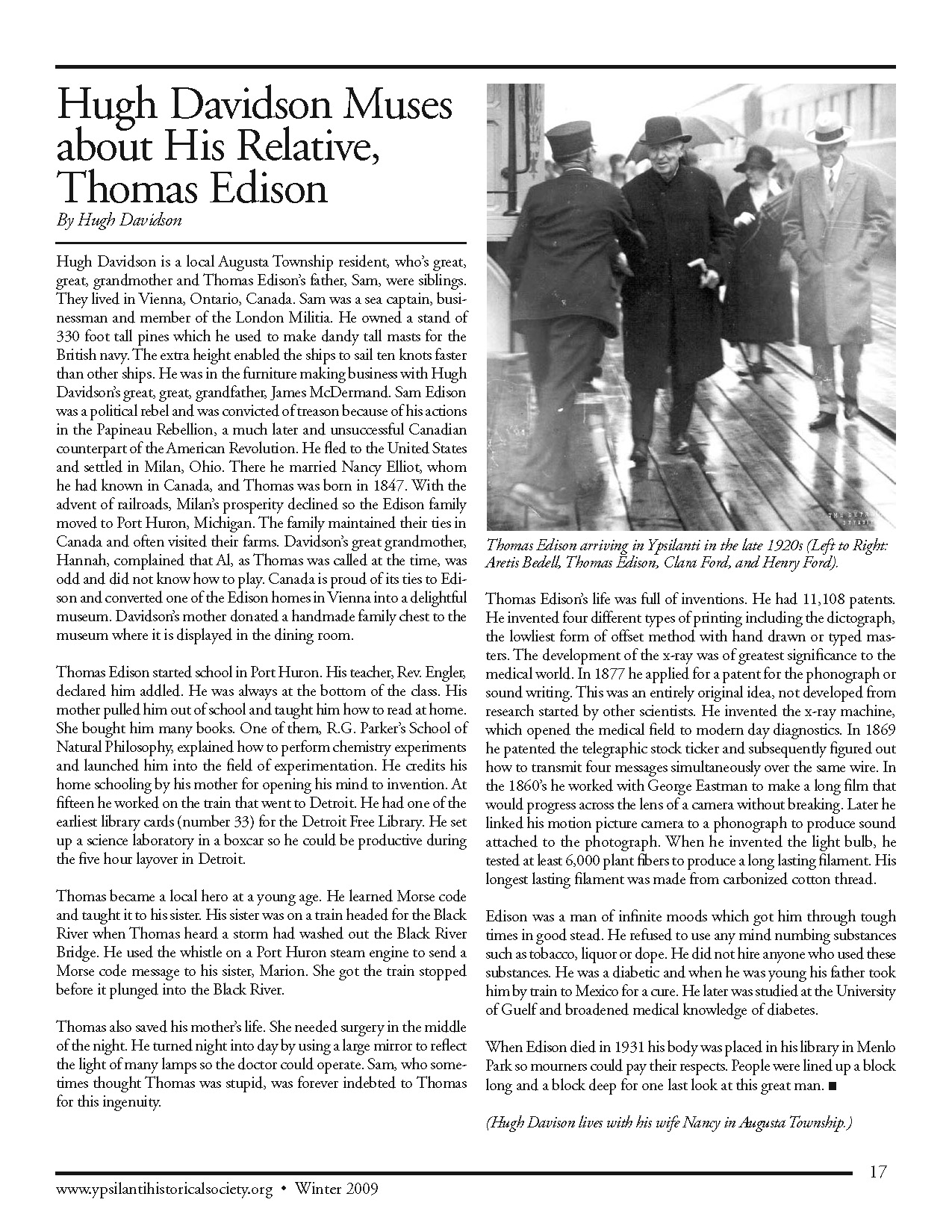 Hugh Davidson is a local Augusta Township resident, who’s great, great, grandmother and Thomas Edison’s father, Sam, were siblings. They lived in Vienna, Ontario, Canada. Sam was a sea captain, businessman and member of the London Militia. He owned a stand of 330 foot tall pines which he used to make dandy tall masts for the British navy. The extra height enabled the ships to sail ten knots faster than other ships. He was in the furniture making business with Hugh Davidson’s great, great, grandfather, James McDermand. Sam Edison was a political rebel and was convicted of treason because of his actions in the Papineau Rebellion, a much later and unsuccessful Canadian counterpart of the American Revolution. He fled to the United States and settled in Milan, Ohio. There he married Nancy Elliot, whom he had known in Canada, and Thomas was born in 1847. With the advent of railroads, Milan’s prosperity declined so the Edison family moved to Port Huron, Michigan. The family maintained their ties in Canada and often visited their farms. Davidson’s great grandmother, Hannah, complained that Al, as Thomas was called at the time, was odd and did not know how to play. Canada is proud of its ties to Edison and converted one of the Edison homes in Vienna into a delightful museum. Davidson’s mother donated a handmade family chest to the museum where it is displayed in the dining room. Thomas Edison started school in Port Huron. His teacher, Rev. Engler, declared him addled. He was always at the bottom of the class. His mother pulled him out of school and taught him how to read at home. She bought him many books. One of them, R.G. Parker’s School of Natural Philosophy, explained how to perform chemistry experiments and launched him into the field of experimentation. He credits his home schooling by his mother for opening his mind to invention. At fifteen he worked on the train that went to Detroit. He had one of the earliest library cards (number 33) for the Detroit Free Library. He set up a science laboratory in a boxcar so he could be productive during the five hour layover in Detroit. Thomas became a local hero at a young age. He learned Morse code and taught it to his sister. His sister was on a train headed for the Black River when Thomas heard a storm had washed out the Black River Bridge. He used the whistle on a Port Huron steam engine to send a Morse code message to his sister, Marion. She got the train stopped before it plunged into the Black River. Thomas also saved his mother’s life. She needed surgery in the middle of the night. He turned night into day by using a large mirror to reflect the light of many lamps so the doctor could operate. Sam, who sometimes thought Thomas was stupid, was forever indebted to Thomas for this ingenuity. Thomas Edison’s life was full of inventions. He had 11,108 patents. He invented four different types of printing including the dictograph, the lowliest form of offset method with hand drawn or typed masters. The development of the x-ray was of greatest significance to the medical world. In 1877 he applied for a patent for the phonograph or sound writing. This was an entirely original idea, not developed from research started by other scientists. He invented the x-ray machine, which opened the medical field to modern day diagnostics. In 1869 he patented the telegraphic stock ticker and subsequently figured out how to transmit four messages simultaneously over the same wire. In the 1860’s he worked with George Eastman to make a long film that would progress across the lens of a camera without breaking. Later he linked his motion picture camera to a phonograph to produce sound attached to the photograph. When he invented the light bulb, he tested at least 6,000 plant fibers to produce a long lasting filament. His longest lasting filament was made from carbonized cotton thread. Edison was a man of infinite moods which got him through tough times in good stead. He refused to use any mind numbing substances such as tobacco, liquor or dope. He did not hire anyone who used these substances. He was a diabetic and when he was young his father took him by train to Mexico for a cure. He later was studied at the University of Guelf and broadened medical knowledge of diabetes. When Edison died in 1931 his body was placed in his library in Menlo Park so mourners could pay their respects. People were lined up a block long and a block deep for one last look at this great man. (Hugh Davidson lives with his wife Nancy in Augusta Township.) Photo Captions: Photo 1: Thomas Edison arriving in Ypsilanti in the late 1920s (Left to Right: Aretis Bedell, Thomas Edison, Clara Ford, and Henry Ford).