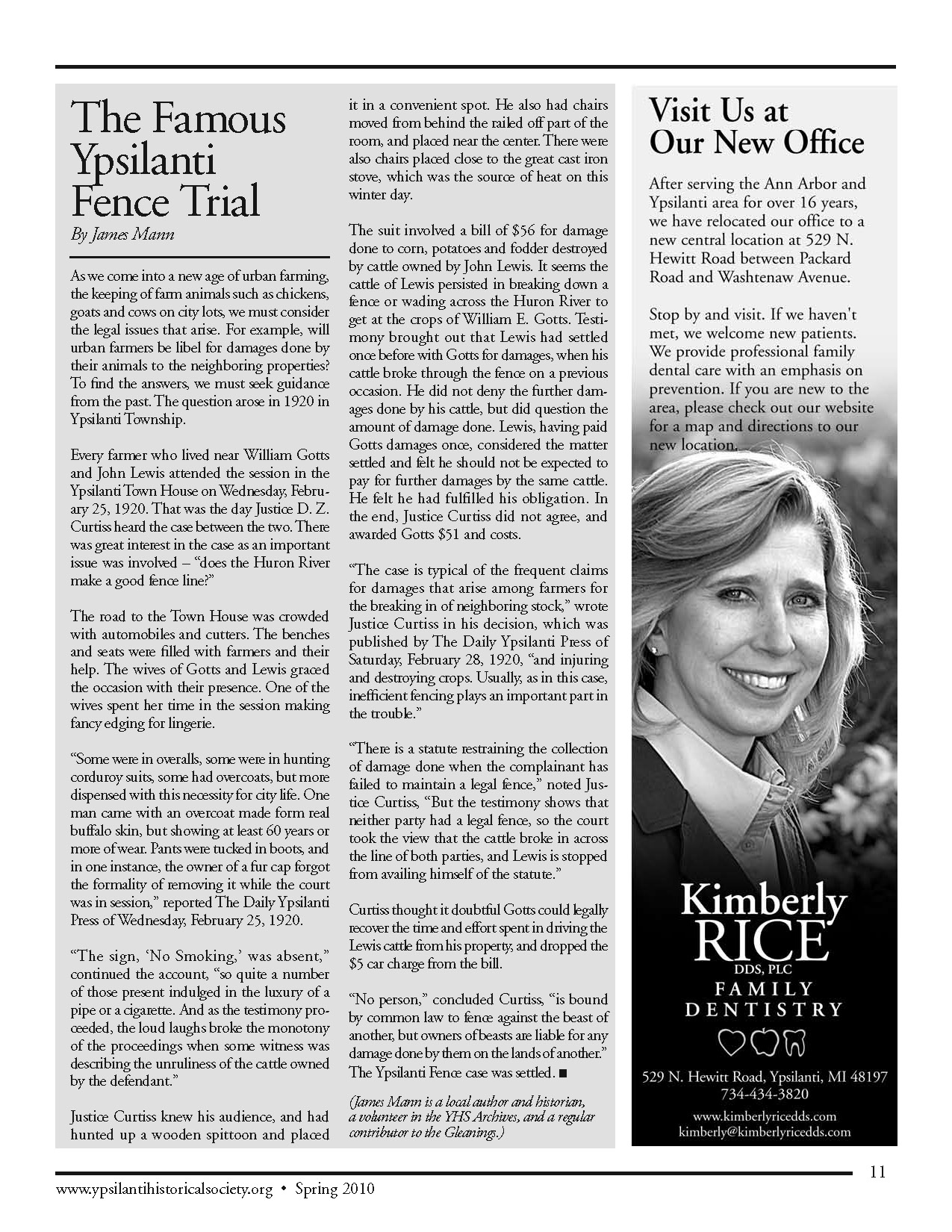 As we come into a new age of urban farming, the keeping of farm animals such as chickens, goats and cows on city lots, we must consider the legal issues that arise. For example, will urban farmers be libel for damages done by their animals to the neighboring properties? To find the answers, we must seek guidance from the past. The question arose in 1920 in Ypsilanti Township.

Every farmer who lived near William Gotts and John Lewis attended the session in the Ypsilanti Town House on Wednesday, February 25, 1920. That was the day Justice D. Z. Curtiss heard the case between the two. There was great interest in the case as an important issue was involved – “does the Huron River make a good fence line?”

The road to the Town House was crowded with automobiles and cutters. The benches and seats were filled with farmers and their help. The wives of Gotts and Lewis graced the occasion with their presence. One of the wives spent her time in the session making fancy edging for lingerie.

“Some were in overalls, some were in hunting corduroy suits, some had overcoats, but more dispensed with this necessity for city life. One man came with an overcoat made form real buffalo skin, but showing at least 60 years or more of wear. Pants were tucked in boots, and in one instance, the owner of a fur cap forgot the formality of removing it while the court was in session,” reported The Daily Ypsilanti Press of Wednesday, February 25, 1920.

“The sign, ‘No Smoking,’ was absent,” continued the account, “so quite a number of those present indulged in the luxury of a pipe or a cigarette. And as the testimony proceeded, the loud laughs broke the monotony of the proceedings when some witness was describing the unruliness of the cattle owned by the defendant.”

Justice Curtiss knew his audience, and had hunted up a wooden spittoon and placed it in a convenient spot. He also had chairs moved from behind the railed off part of the room, and placed near the center. There were also chairs placed close to the great cast iron stove, which was the source of heat on this winter day.

The suit involved a bill of $56 for damage done to corn, potatoes and fodder destroyed by cattle owned by John Lewis. It seems the cattle of Lewis persisted in breaking down a fence or wading across the Huron River to get at the crops of William E. Gotts. Testimony brought out that Lewis had settled once before with Gotts for damages, when his cattle broke through the fence on a previous occasion. He did not deny the further damages done by his cattle, but did question the amount of damage done. Lewis, having paid Gotts damages once, considered the matter settled and felt he should not be expected to pay for further damages by the same cattle. He felt he had fulfilled his obligation. In the end, Justice Curtiss did not agree, and awarded Gotts $51 and costs.

“The case is typical of the frequent claims for damages that arise among farmers for the breaking in of neighboring stock,” wrote Justice Curtiss in his decision, which was published by The Daily Ypsilanti Press of Saturday, February 28, 1920, “and injuring and destroying crops. Usually, as in this case, inefficient fencing plays an important part in the trouble.”

“There is a statute restraining the collection of damage done when the complainant has failed to maintain a legal fence,” noted Justice Curtiss, “But the testimony shows that neither party had a legal fence, so the court took the view that the cattle broke in across the line of both parties, and Lewis is stopped from availing himself of the statute.”

Curtiss thought it doubtful Gotts could legally recover the time and effort spent in driving the Lewis cattle from his property, and dropped the $5 car charge from the bill.

“No person,” concluded Curtiss, “is bound by common law to fence against the beast of another, but owners of beasts are liable for any damage done by them on the lands of another.” The Ypsilanti Fence case was settled.