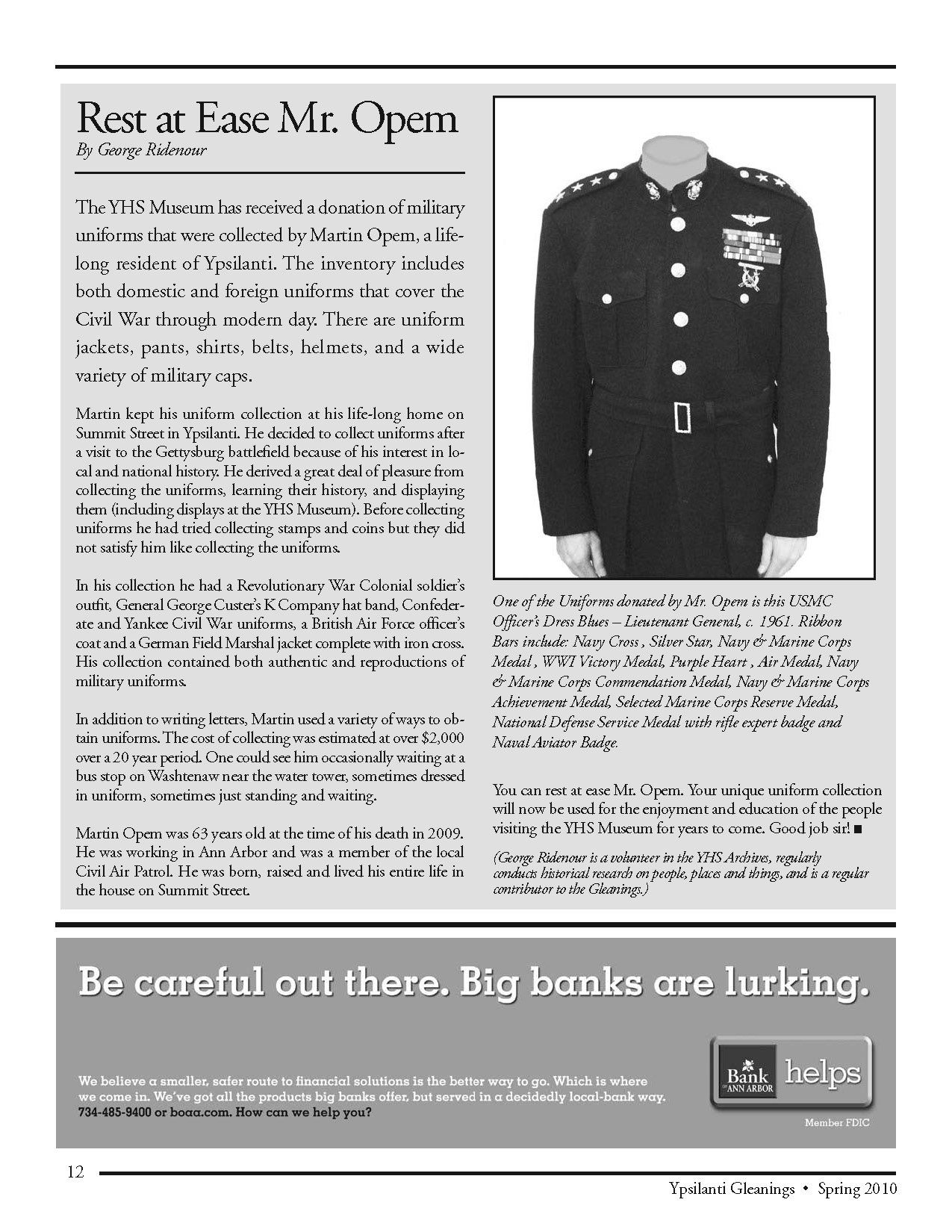 The YHS Museum has received a donation of military uniforms that were collected by Martin Opem, a life-long resident of Ypsilanti. The inventory includes both domestic and foreign uniforms that cover the Civil War through modern day. There are uniform jackets, pants, shirts, belts, helmets, and a wide variety of military caps. Martin kept his uniform collection at his life-long home on Summit Street in Ypsilanti. He decided to collect uniforms after a visit to the Gettysburg battlefield because of his interest in local and national history. He derived a great deal of pleasure from collecting the uniforms, learning their history, and displaying them (including displays at the YHS Museum). Before collecting uniforms he had tried collecting stamps and coins but they did not satisfy him like collecting the uniforms. In his collection he had a Revolutionary War Colonial soldier’s outfit, General George Custer’s K Company hat band, Confederate and Yankee Civil War uniforms, a British Air Force officer’s coat and a German Field Marshal jacket complete with iron cross. His collection contained both authentic and reproductions of military uniforms. In addition to writing letters, Martin used a variety of ways to obtain uniforms. The cost of collecting was estimated at over $2,000 over a 20 year period. One could see him occasionally waiting at a bus stop on Washtenaw near the water tower, sometimes dressed in uniform, sometimes just standing and waiting. Martin Opem was 63 years old at the time of his death in 2009. He was working in Ann Arbor and was a member of the local Civil Air Patrol. He was born, raised and lived his entire life in the house on Summit Street. You can rest at ease Mr. Opem. Your unique uniform collection will now be used for the enjoyment and education of the people visiting the YHS Museum for years to come. Good job sir! (George Ridenour is a volunteer in the YHS Archives, regularly conducts historical research on people, places and things, and is a regular contributor to the Gleanings.) Photo Captions:
Photo 1: One of the Uniforms donated by Mr. Opem is this USMC Officer’s Dress Blues – Lieutenant General, c. 1961. Ribbon Bars include: Navy Cross , Silver Star, Navy & Marine Corps Medal , WWI Victory Medal, Purple Heart , Air Medal, Navy & Marine Corps Commendation Medal, Navy & Marine Corps Achievement Medal, Selected Marine Corps Reserve Medal, National Defense Service Medal with rifle expert badge and Naval Aviator Badge.