When Lions Stalked the Streets of Ypsilanti 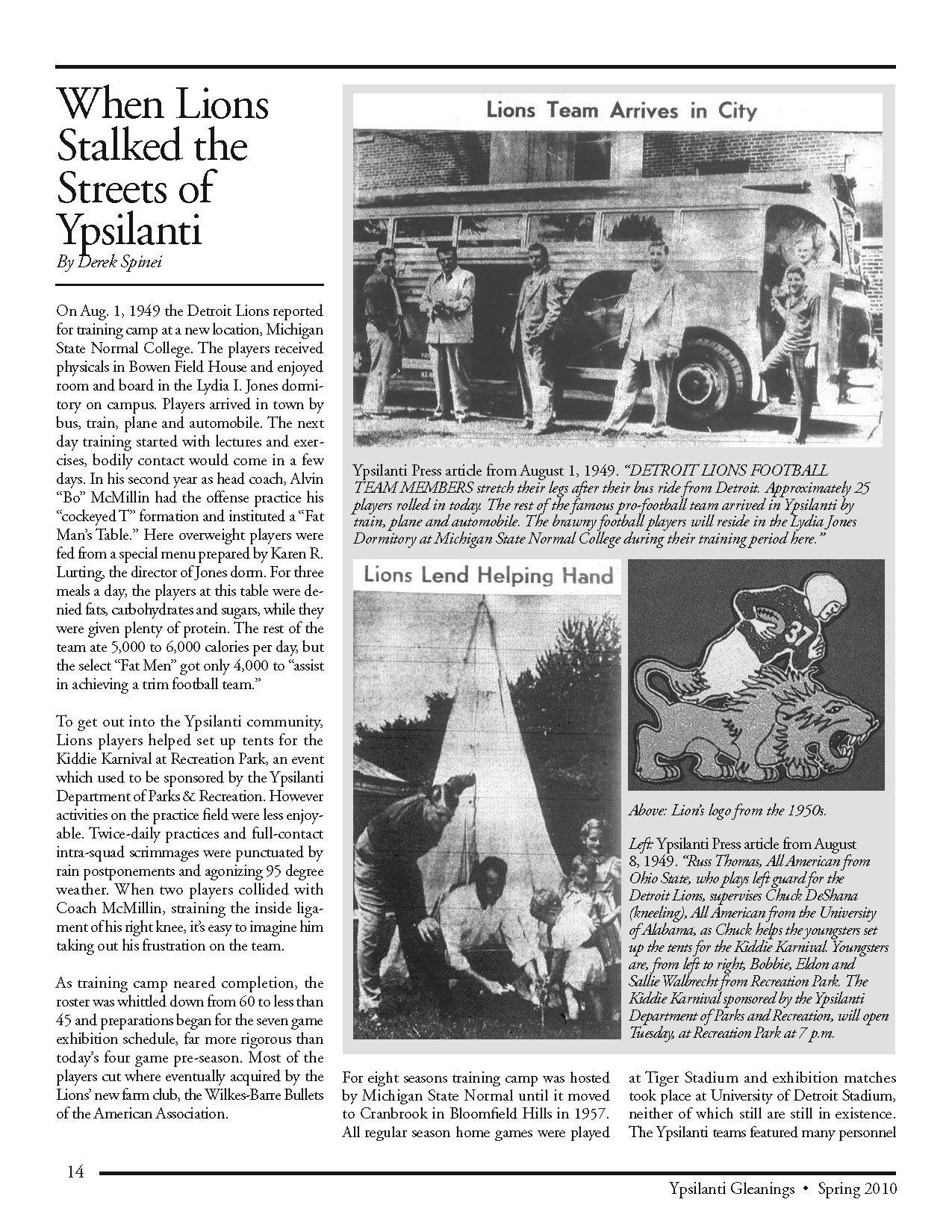 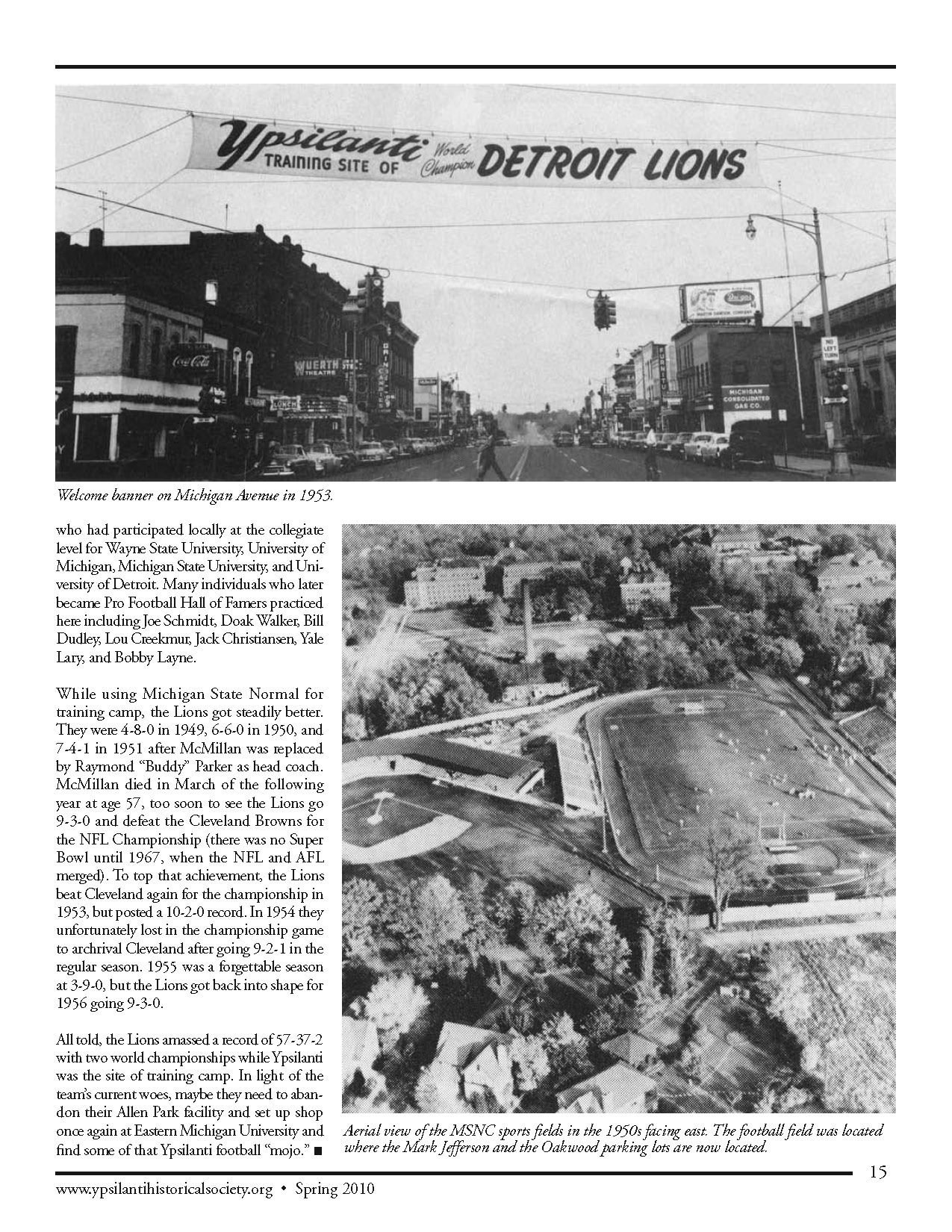 On Aug. 1, 1949 the Detroit Lions reported for training camp at a new location, Michigan State Normal College. The players received physicals in Bowen Field House and enjoyed room and board in the Lydia I. Jones dormitory on campus. Players arrived in town by bus, train, plane and automobile. The next day training started with lectures and exercises, bodily contact would come in a few days. In his second year as head coach, Alvin “Bo” McMillin had the offense practice his “cockeyed T” formation and instituted a “Fat Man’s Table.” Here overweight players were fed from a special menu prepared by Karen R. Lurting, the director of Jones dorm. For three meals a day, the players at this table were denied fats, carbohydrates and sugars, while they were given plenty of protein. The rest of the team ate 5,000 to 6,000 calories per day, but the select “Fat Men” got only 4,000 to “assist in achieving a trim football team.” To get out into the Ypsilanti community, Lions players helped set up tents for the Kiddie Karnival at Recreation Park, an event which used to be sponsored by the Ypsilanti Department of Parks & Recreation. However activities on the practice field were less enjoyable. Twice-daily practices and full-contact intra-squad scrimmages were punctuated by rain postponements and agonizing 95 degree weather. When two players collided with Coach McMillin, straining the inside ligament of his right knee, it’s easy to imagine him taking out his frustration on the team. As training camp neared completion, the roster was whittled down from 60 to less than 45 and preparations began for the seven game exhibition schedule, far more rigorous than today’s four game pre-season. Most of the players cut where eventually acquired by the Lions’ new farm club, the Wilkes-Barre Bullets of the American Association. For eight seasons training camp was hosted by Michigan State Normal until it moved to Cranbrook in Bloomfield Hills in 1957. All regular season home games were played at Tiger Stadium and exhibition matches took place at University of Detroit Stadium, neither of which still are still in existence. The Ypsilanti teams featured many personnel who had participated locally at the collegiate level for Wayne State University, University of Michigan, Michigan State University, and University of Detroit. Many individuals who later became Pro Football Hall of Famers practiced here including Joe Schmidt, Doak Walker, Bill Dudley, Lou Creekmur, Jack Christiansen, Yale Lary, and Bobby Layne. While using Michigan State Normal for training camp, the Lions got steadily better. They were 4-8-0 in 1949, 6-6-0 in 1950, and 7-4-1 in 1951 after McMillan was replaced by Raymond “Buddy” Parker as head coach. McMillan died in March of the following year at age 57, too soon to see the Lions go 9-3-0 and defeat the Cleveland Browns for the NFL Championship (there was no Super Bowl until 1967, when the NFL and AFL merged). To top that achievement, the Lions beat Cleveland again for the championship in 1953, but posted a 10-2-0 record. In 1954 they unfortunately lost in the championship game to archrival Cleveland after going 9-2-1 in the regular season. 1955 was a forgettable season at 3-9-0, but the Lions got back into shape for 1956 going 9-3-0. All told, the Lions amassed a record of 57-37-2 with two world championships while Ypsilanti was the site of training camp. In light of the team’s current woes, maybe they need to abandon their Allen Park facility and set up shop once again at Eastern Michigan University and find some of that Ypsilanti football “mojo.” Photo Captions: Photo 1: Ypsilanti Press article from August 1, 1949. “DETROIT LIONS FOOTBALL TEAM MEMBERS stretch their legs after their bus ride from Detroit. Approximately 25 players rolled in today. The rest of the famous pro-football team arrived in Ypsilanti by train, plane and automobile. The brawny football players will reside in the Lydia Jones Dormitory at Michigan State Normal College during their training period here.”

Photo 2: Ypsilanti Press article from August 8, 1949. “Russ Thomas, All American from Ohio State, who plays left guard for the Detroit Lions, supervises Chuck DeShana (kneeling), All American from the University of Alabama, as Chuck helps the youngsters set up the tents for the Kiddie Karnival. Youngsters are, from left to right, Bobbie, Eldon and Sallie Walbrecht from Recreation Park. The Kiddie Karnival sponsored by the Ypsilanti Department of Parks and Recreation, will open Tuesday, at Recreation Park at 7 p.m.

Photo 5: Aerial view of the MSNC sports fields in the 1950s facing east. The football field was located where the Mark Jefferson and the Oakwood parking lots are now located.