They Called Him "Yip" 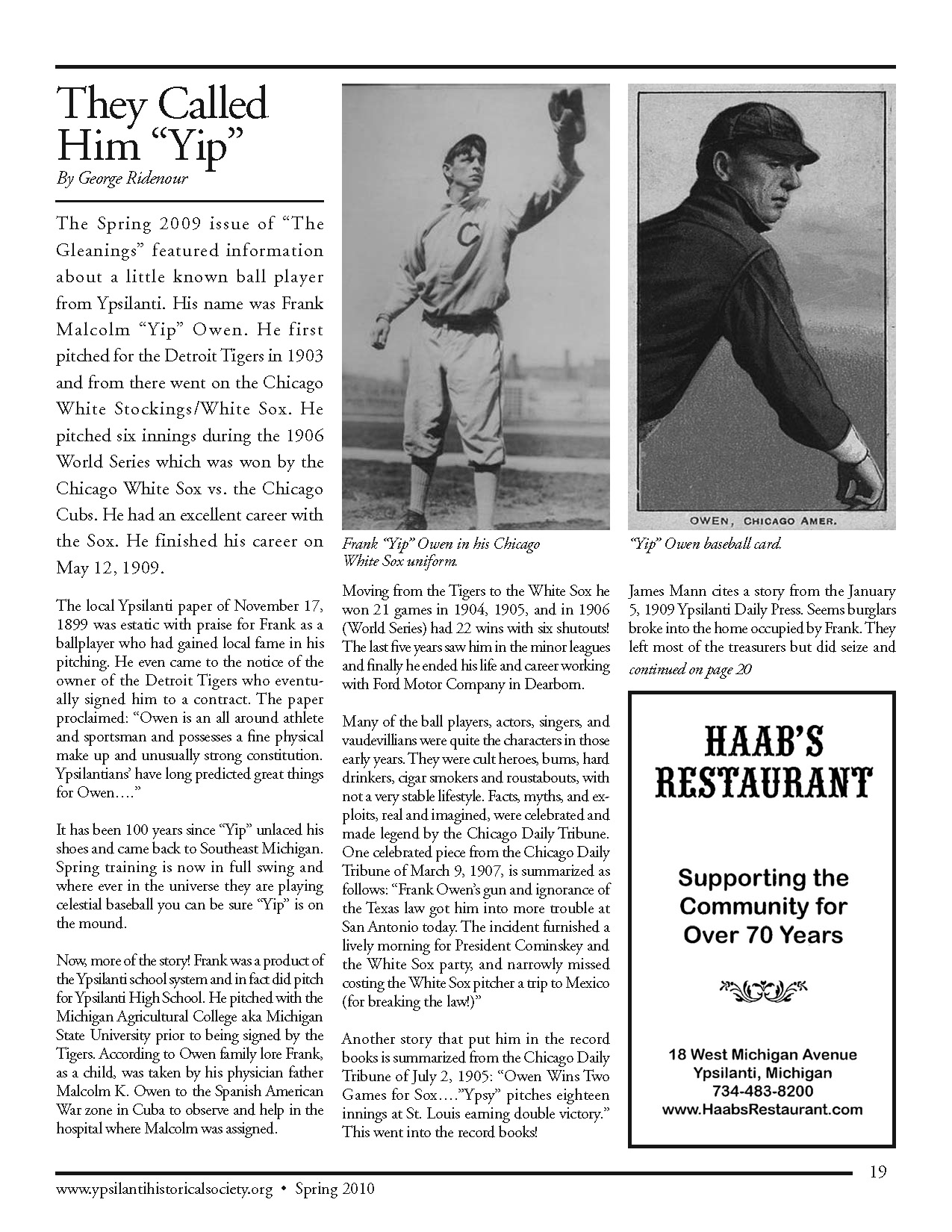 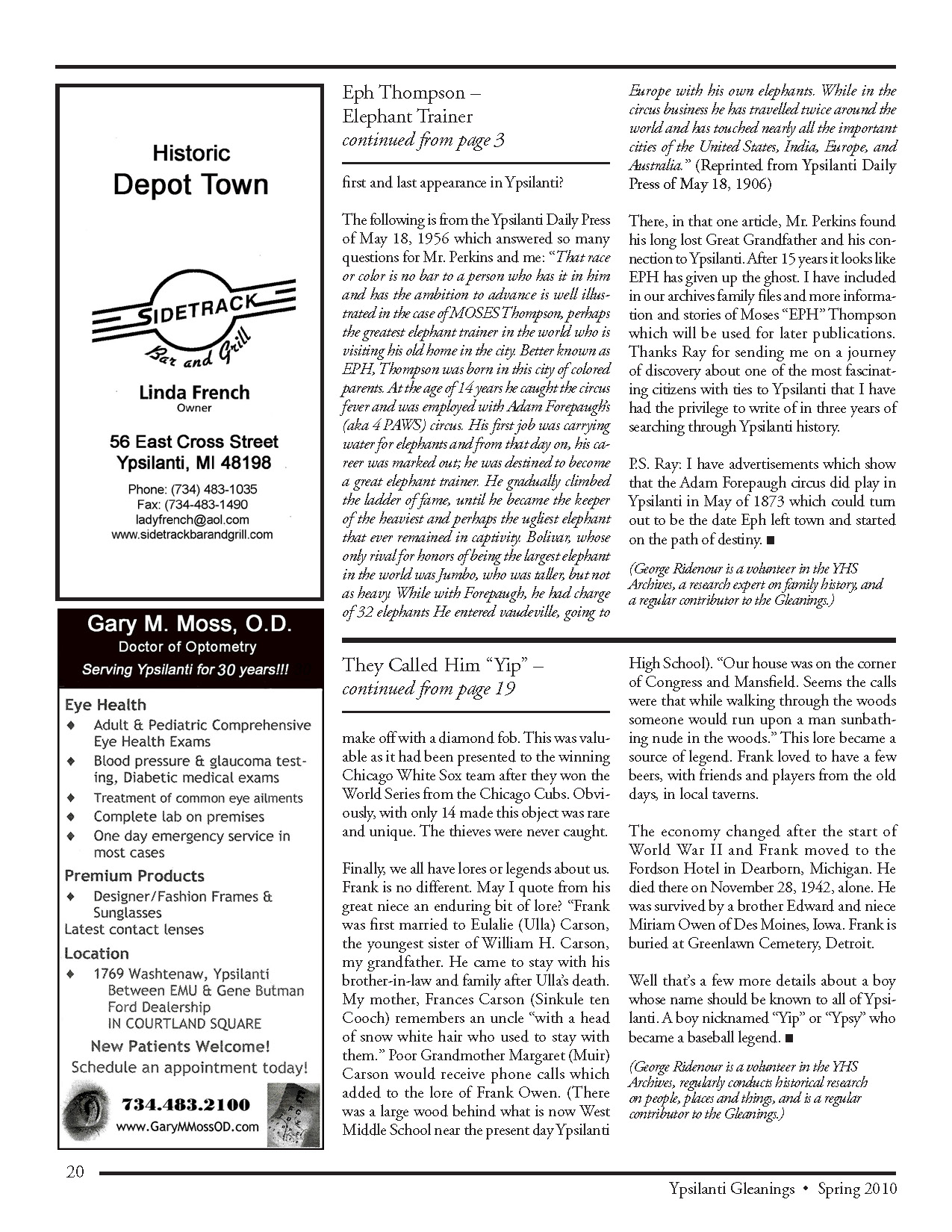 The Spring 2009 issue of “The Gleanings” featured information about a little known ball player from Ypsilanti. His name was Frank Malcolm “Yip” Owen. He first pitched for the Detroit Tigers in 1903 and from there went on the Chicago White Stockings/White Sox. He pitched six innings during the 1906 World Series which was won by the Chicago White Sox vs. the Chicago Cubs. He had an excellent career with the Sox. He finished his career on May 12, 1909. The local Ypsilanti paper of November 17, 1899 was estatic with praise for Frank as a ballplayer who had gained local fame in his pitching. He even came to the notice of the owner of the Detroit Tigers who eventually signed him to a contract. The paper proclaimed: “Owen is an all around athlete and sportsman and possesses a fine physical make up and unusually strong constitution. Ypsilantians’ have long predicted great things for Owen….” It has been 100 years since “Yip” unlaced his shoes and came back to Southeast Michigan. Spring training is now in full swing and where ever in the universe they are playing celestial baseball you can be sure “Yip” is on the mound. Now, more of the story! Frank was a product of the Ypsilanti school system and in fact did pitch for Ypsilanti High School. He pitched with the Michigan Agricultural College aka Michigan State University prior to being signed by the Tigers. According to Owen family lore Frank, as a child, was taken by his physician father Malcolm K. Owen to the Spanish American War zone in Cuba to observe and help in the hospital where Malcolm was assigned. Moving from the Tigers to the White Sox he won 21 games in 1904, 1905, and in 1906 (World Series) had 22 wins with six shutouts! The last five years saw him in the minor leagues and finally he ended his life and career working with Ford Motor Company in Dearborn. Many of the ball players, actors, singers, and vaudevillians were quite the characters in those early years. They were cult heroes, bums, hard drinkers, cigar smokers and roustabouts, with not a very stable lifestyle. Facts, myths, and exploits, real and imagined, were celebrated and made legend by the Chicago Daily Tribune. One celebrated piece from the Chicago Daily Tribune of March 9, 1907, is summarized as follows: “Frank Owen’s gun and ignorance of the Texas law got him into more trouble at San Antonio today. The incident furnished a lively morning for President Cominskey and the White Sox party, and narrowly missed costing the White Sox pitcher a trip to Mexico (for breaking the law!)” Another story that put him in the record books is summarized from the Chicago Daily Tribune of July 2, 1905: “Owen Wins Two Games for Sox….”Ypsy” pitches eighteen innings at St. Louis earning double victory.” This went into the record books! James Mann cites a story from the January 5, 1909 Ypsilanti Daily Press. Seems burglars broke into the home occupied by Frank. They left most of the treasurers but did seize and make off with a diamond fob. This was valuable as it had been presented to the winning Chicago White Sox team after they won the World Series from the Chicago Cubs. Obviously, with only 14 made this object was rare and unique. The thieves were never caught. Finally, we all have lores or legends about us. Frank is no different. May I quote from his great niece an enduring bit of lore? “Frank was first married to Eulalie (Ulla) Carson, the youngest sister of William H. Carson, my grandfather. He came to stay with his brother-in-law and family after Ulla’s death. My mother, Frances Carson (Sinkule ten Cooch) remembers an uncle “with a head of snow white hair who used to stay with them.” Poor Grandmother Margaret (Muir) Carson would receive phone calls which added to the lore of Frank Owen. (There was a large wood behind what is now West Middle School near the present day Ypsilanti High School). “Our house was on the corner of Congress and Mansfield. Seems the calls were that while walking through the woods someone would run upon a man sunbathing nude in the woods.” This lore became a source of legend. Frank loved to have a few beers, with friends and players from the old days, in local taverns. The economy changed after the start of World War II and Frank moved to the Fordson Hotel in Dearborn, Michigan. He died there on November 28, 1942, alone. He was survived by a brother Edward and niece Miriam Owen of Des Moines, Iowa. Frank is buried at Greenlawn Cemetery, Detroit. Well that’s a few more details about a boy whose name should be known to all of Ypsilanti. A boy nicknamed “Yip” or “Ypsy” who became a baseball legend. (George Ridenour is a volunteer in the YHS Archives, regularly conducts historical research on people, places and things, and is a regular contributor to the Gleanings.) Photo Captions: Photo 1: Frank “Yip” Owen in his Chicago White Sox uniform.