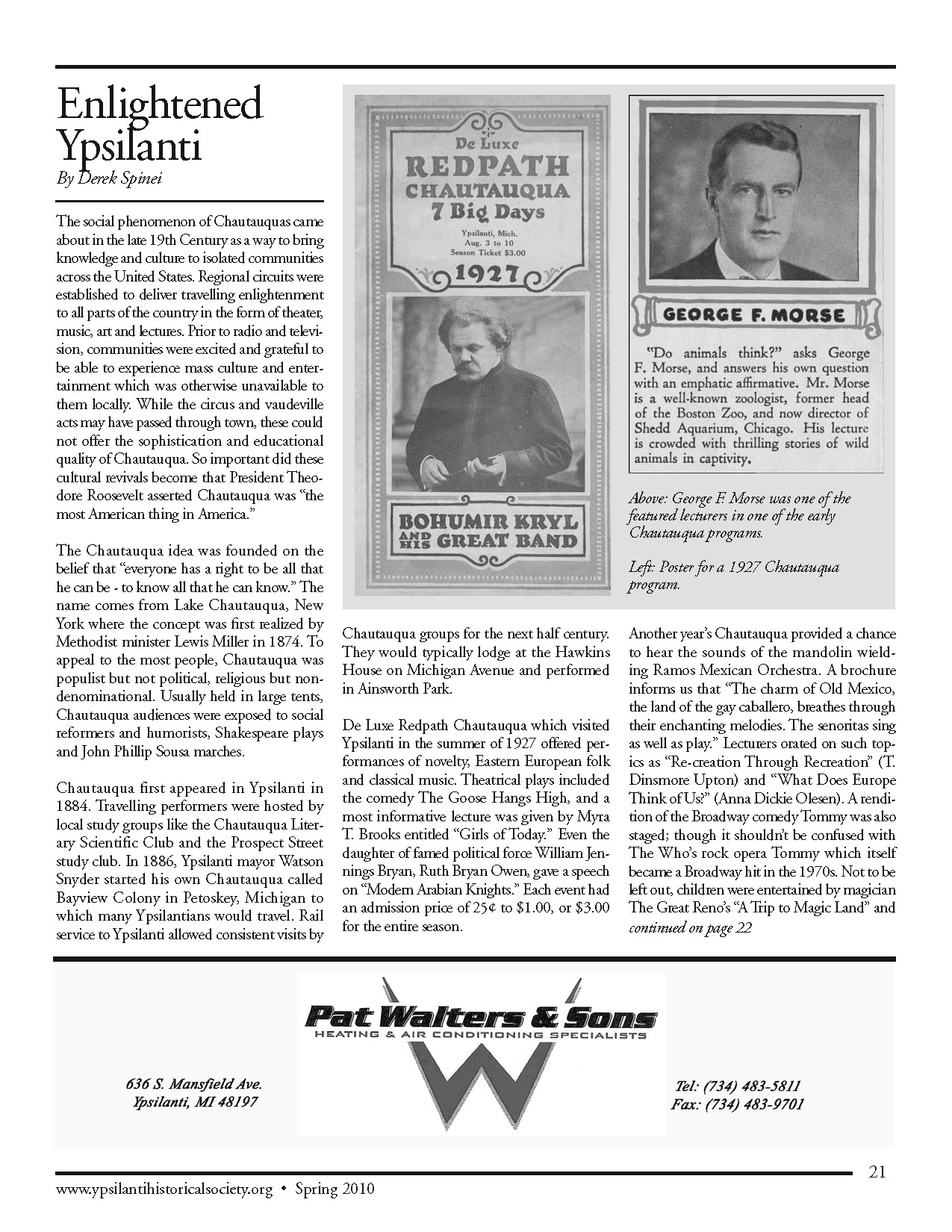 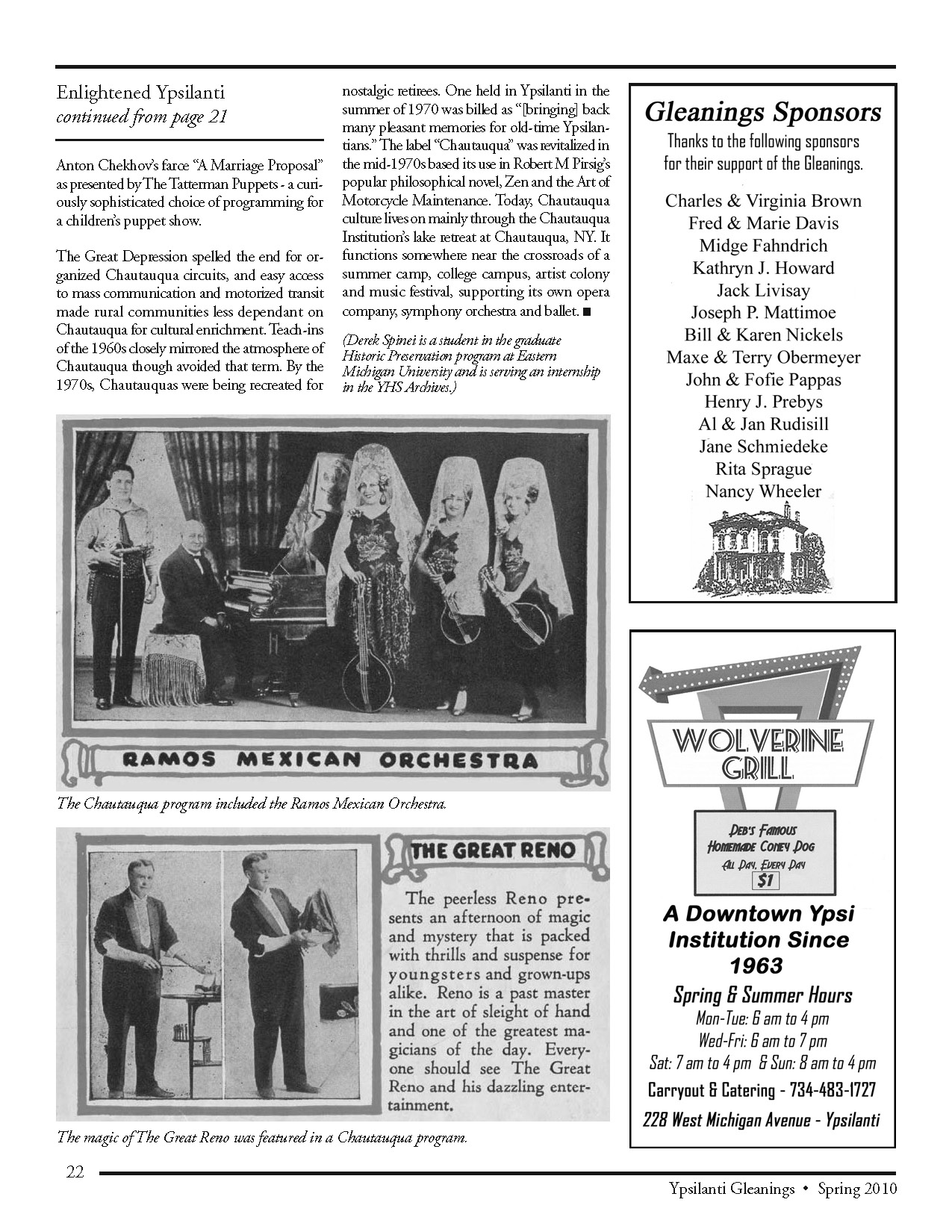 The social phenomenon of Chautauquas came about in the late 19th Century as a way to bring knowledge and culture to isolated communities across the United States. Regional circuits were established to deliver travelling enlightenment to all parts of the country in the form of theater, music, art and lectures. Prior to radio and television, communities were excited and grateful to be able to experience mass culture and entertainment which was otherwise unavailable to them locally. While the circus and vaudeville acts may have passed through town, these could not offer the sophistication and educational quality of Chautauqua. So important did these cultural revivals become that President Theodore Roosevelt asserted Chautauqua was “the most American thing in America.”

The Chautauqua idea was founded on the belief that “everyone has a right to be all that he can be - to know all that he can know.” The name comes from Lake Chautauqua, New York where the concept was first realized by Methodist minister Lewis Miller in 1874. To appeal to the most people, Chautauqua was populist but not political, religious but nondenominational. Usually held in large tents, Chautauqua audiences were exposed to social reformers and humorists, Shakespeare plays and John Phillip Sousa marches.

Chautauqua first appeared in Ypsilanti in 1884. Travelling performers were hosted by local study groups like the Chautauqua Literary Scientific Club and the Prospect Street study club. In 1886, Ypsilanti mayor Watson Snyder started his own Chautauqua called Bayview Colony in Petoskey, Michigan to which many Ypsilantians would travel. Rail service to Ypsilanti allowed consistent visits by Chautauqua groups for the next half century. They would typically lodge at the Hawkins House on Michigan Avenue and performed in Ainsworth Park.

De Luxe Redpath Chautauqua which visited Ypsilanti in the summer of 1927 offered performances of novelty, Eastern European folk and classical music. Theatrical plays included the comedy The Goose Hangs High, and a most informative lecture was given by Myra T. Brooks entitled “Girls of Today.” Even the daughter of famed political force William Jennings Bryan, Ruth Bryan Owen, gave a speech on “Modern Arabian Knights.” Each event had an admission price of 25¢ to $1.00, or $3.00 for the entire season.

Another year’s Chautauqua provided a chance to hear the sounds of the mandolin wielding Ramos Mexican Orchestra. A brochure informs us that “The charm of Old Mexico, the land of the gay caballero, breathes through their enchanting melodies. The senoritas sing as well as play.” Lecturers orated on such topics as “Re-creation Through Recreation” (T. Dinsmore Upton) and “What Does Europe Think of Us?” (Anna Dickie Olesen). A rendition of the Broadway comedy Tommy was also staged; though it shouldn’t be confused with The Who’s rock opera Tommy which itself became a Broadway hit in the 1970s. Not to be left out, children were entertained by magician The Great Reno’s “A Trip to Magic Land” and Anton Chekhov’s farce “A Marriage Proposal” as presented by The Tatterman Puppets - a curiously sophisticated choice of programming for a children’s puppet show.

The Great Depression spelled the end for organized Chautauqua circuits, and easy access to mass communication and motorized transit made rural communities less dependant on Chautauqua for cultural enrichment. Teach-ins of the 1960s closely mirrored the atmosphere of Chautauqua though avoided that term. By the 1970s, Chautauquas were being recreated for nostalgic retirees. One held in Ypsilanti in the summer of 1970 was billed as “[bringing] back many pleasant memories for old-time Ypsilantians.” The label “Chautauqua” was revitalized in the mid-1970s based its use in Robert M Pirsig’s popular philosophical novel, Zen and the Art of Motorcycle Maintenance. Today, Chautauqua culture lives on mainly through the Chautauqua Institution’s lake retreat at Chautauqua, NY. It functions somewhere near the crossroads of a summer camp, college campus, artist colony and music festival, supporting its own opera company, symphony orchestra and ballet.

(Derek Spinei is a student in the graduate Historic Preservation program at Eastern Michigan University and is serving an internship in the YHS Archives.)

Photo 2: George F. Morse was one of the featured lecturers in one of the early Chautauqua programs.

Photo 4: The magic of The Great Reno was featured in a Chautauqua program.