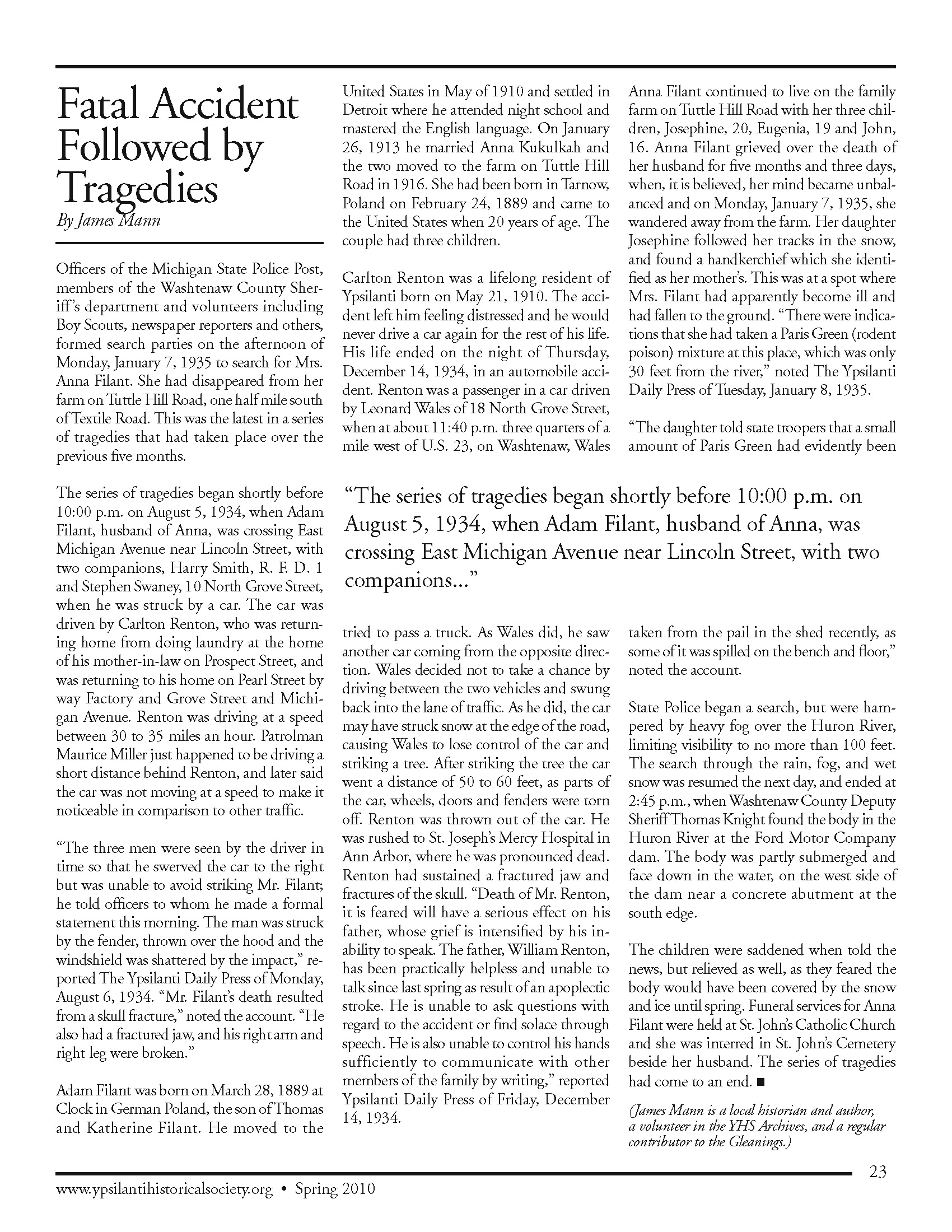 Officers of the Michigan State Police Post, members of the Washtenaw County Sheriff’s department and volunteers including Boy Scouts, newspaper reporters and others, formed search parties on the afternoon of Monday, January 7, 1935 to search for Mrs. Anna Filant. She had disappeared from her farm on Tuttle Hill Road, one half mile south of Textile Road. This was the latest in a series of tragedies that had taken place over the previous five months.

The series of tragedies began shortly before 10:00 p.m. on August 5, 1934, when Adam Filant, husband of Anna, was crossing East Michigan Avenue near Lincoln Street, with two companions, Harry Smith, R. F. D. 1 and Stephen Swaney, 10 North Grove Street, when he was struck by a car. The car was driven by Carlton Renton, who was returning home from doing laundry at the home of his mother-in-law on Prospect Street, and was returning to his home on Pearl Street by way Factory and Grove Street and Michigan Avenue. Renton was driving at a speed between 30 to 35 miles an hour. Patrolman Maurice Miller just happened to be driving a short distance behind Renton, and later said the car was not moving at a speed to make it noticeable in comparison to other traffic.

“The three men were seen by the driver in time so that he swerved the car to the right but was unable to avoid striking Mr. Filant; he told officers to whom he made a formal statement this morning. The man was struck by the fender, thrown over the hood and the windshield was shattered by the impact,” reported The Ypsilanti Daily Press of Monday, August 6, 1934.

“Mr. Filant’s death resulted from a skull fracture,” noted the account. “He also had a fractured jaw, and his right arm and right leg were broken.”

Adam Filant was born on March 28, 1889 at Clock in German Poland, the son of Thomas and Katherine Filant. He moved to the United States in May of 1910 and settled in Detroit where he attended night school and mastered the English language. On January 26, 1913 he married Anna Kukulkah and the two moved to the farm on Tuttle Hill Road in 1916. She had been born in Tarnow, Poland on February 24, 1889 and came to the United States when 20 years of age. The couple had three children.

Carlton Renton was a lifelong resident of Ypsilanti born on May 21, 1910. The accident left him feeling distressed and he would never drive a car again for the rest of his life. His life ended on the night of Thursday, December 14, 1934, in an automobile accident. Renton was a passenger in a car driven by Leonard Wales of 18 North Grove Street, when at about 11:40 p.m. three quarters of a mile west of U.S. 23, on Washtenaw, Wales tried to pass a truck. As Wales did, he saw another car coming from the opposite direction. Wales decided not to take a chance by driving between the two vehicles and swung back into the lane of traffic. As he did, the car may have struck snow at the edge of the road, causing Wales to lose control of the car and striking a tree. After striking the tree the car went a distance of 50 to 60 feet, as parts of the car, wheels, doors and fenders were torn off. Renton was thrown out of the car. He was rushed to St. Joseph’s Mercy Hospital in Ann Arbor, where he was pronounced dead. Renton had sustained a fractured jaw and fractures of the skull.

“Death of Mr. Renton, it is feared will have a serious effect on his father, whose grief is intensified by his inability to speak. The father, William Renton, has been practically helpless and unable to talk since last spring as result of an apoplectic stroke. He is unable to ask questions with regard to the accident or find solace through speech. He is also unable to control his hands sufficiently to communicate with other members of the family by writing,” reported Ypsilanti Daily Press of Friday, December 14, 1934.

Anna Filant continued to live on the family farm on Tuttle Hill Road with her three children, Josephine, 20, Eugenia, 19 and John, 16. Anna Filant grieved over the death of her husband for five months and three days, when, it is believed, her mind became unbalanced and on Monday, January 7, 1935, she wandered away from the farm. Her daughter Josephine followed her tracks in the snow, and found a handkerchief which she identified as her mother’s. This was at a spot where Mrs. Filant had apparently become ill and had fallen to the ground. “There were indications that she had taken a Paris Green (rodent poison) mixture at this place, which was only 30 feet from the river,” noted The Ypsilanti Daily Press of Tuesday, January 8, 1935.

“The daughter told state troopers that a small amount of Paris Green had evidently been taken from the pail in the shed recently, as some of it was spilled on the bench and floor,” noted the account.

State Police began a search, but were hampered by heavy fog over the Huron River, limiting visibility to no more than 100 feet. The search through the rain, fog, and wet snow was resumed the next day, and ended at 2:45 p.m., when Washtenaw County Deputy Sheriff Thomas Knight found the body in the Huron River at the Ford Motor Company dam. The body was partly submerged and face down in the water, on the west side of the dam near a concrete abutment at the south edge.

The children were saddened when told the news, but relieved as well, as they feared the body would have been covered by the snow and ice until spring. Funeral services for Anna Filant were held at St. John’s Catholic Church and she was interred in St. John’s Cemetery beside her husband. The series of tragedies had come to an end.