Finds in the Archives 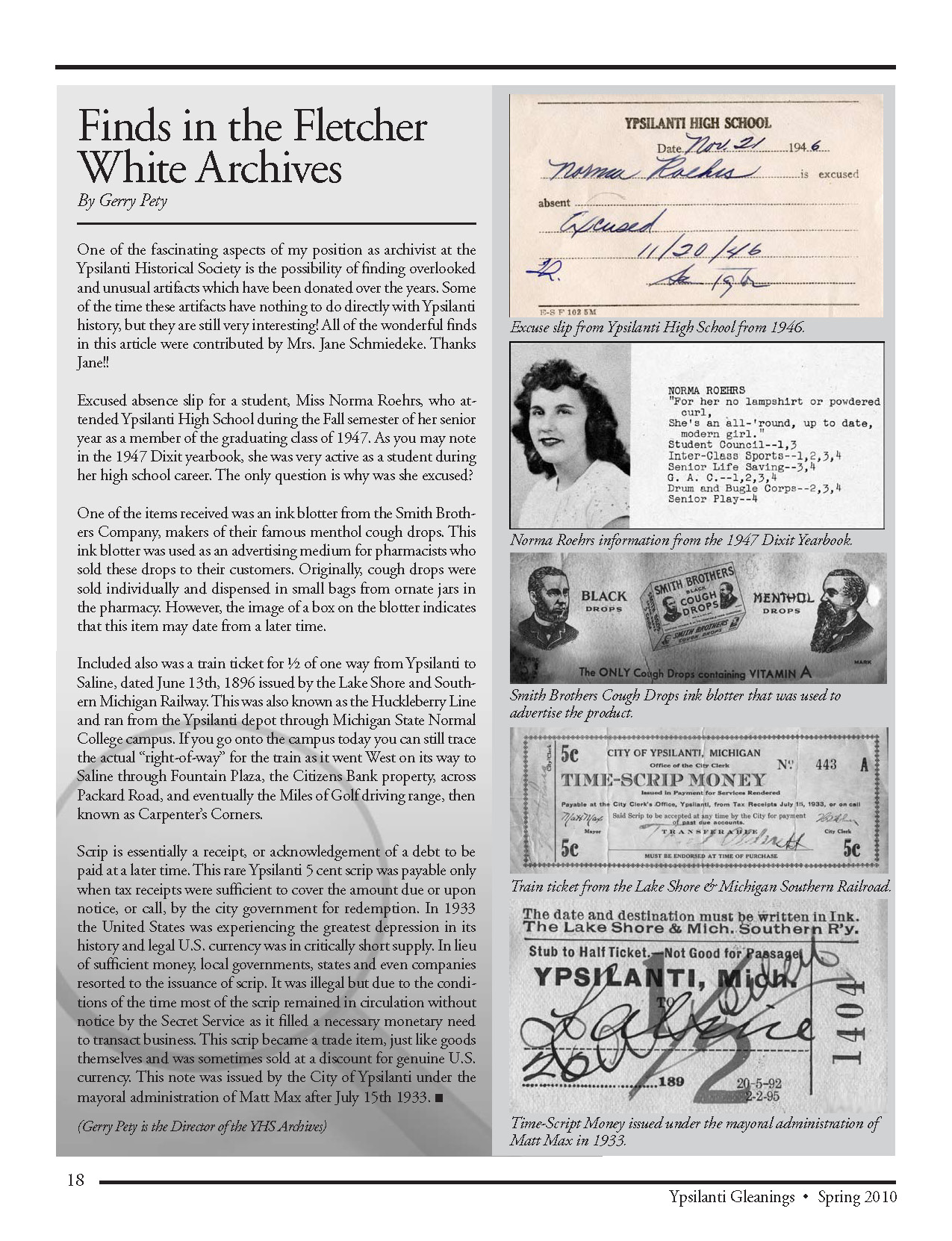 One of the fascinating aspects of my position as archivist at the Ypsilanti Historical Society is the possibility of finding overlooked and unusual artifacts which have been donated over the years. Some of the time these artifacts have nothing to do directly with Ypsilanti history, but they are still very interesting! All of the wonderful finds in this article were contributed by Mrs. Jane Schmiedeke. Thanks Jane!!

Excused absence slip for a student, Miss Norma Roehrs, who attended Ypsilanti High School during the Fall semester of her senior year as a member of the graduating class of 1947. As you may note in the 1947 Dixit yearbook, she was very active as a student during her high school career. The only question is why was she excused?

One of the items received was an ink blotter from the Smith Brothers Company, makers of their famous menthol cough drops. This ink blotter was used as an advertising medium for pharmacists who sold these drops to their customers. Originally, cough drops were sold individually and dispensed in small bags from ornate jars in the pharmacy. However, the image of a box on the blotter indicates that this item may date from a later time.

Included also was a train ticket for ½ of one way from Ypsilanti to Saline, dated June 13th, 1896 issued by the Lake Shore and Southern Michigan Railway. This was also known as the Huckleberry Line and ran from the Ypsilanti depot through Michigan State Normal College campus. If you go onto the campus today you can still trace the actual “right-of-way” for the train as it went West on its way to Saline through Fountain Plaza, the Citizens Bank property, across Packard Road, and eventually the Miles of Golf driving range, then known as Carpenter’s Corners.

Scrip is essentially a receipt, or acknowledgement of a debt to be paid at a later time. This rare Ypsilanti 5 cent scrip was payable only when tax receipts were sufficient to cover the amount due or upon notice, or call, by the city government for redemption. In 1933 the United States was experiencing the greatest depression in its history and legal U.S. currency was in critically short supply. In lieu of sufficient money, local governments, states and even companies resorted to the issuance of scrip. It was illegal but due to the conditions of the time most of the scrip remained in circulation without notice by the Secret Service as it filled a necessary monetary need to transact business. This scrip became a trade item, just like goods themselves and was sometimes sold at a discount for genuine U.S. currency. This note was issued by the City of Ypsilanti under the mayoral administration of Matt Max after July 15th 1933.

(Gerry Pety is the Director of the YHS Archives:

Photo 5: Time-Script Money issued under the mayoral administration of Matt Max in 1933.