The Chautauqua Movement – More of the Story 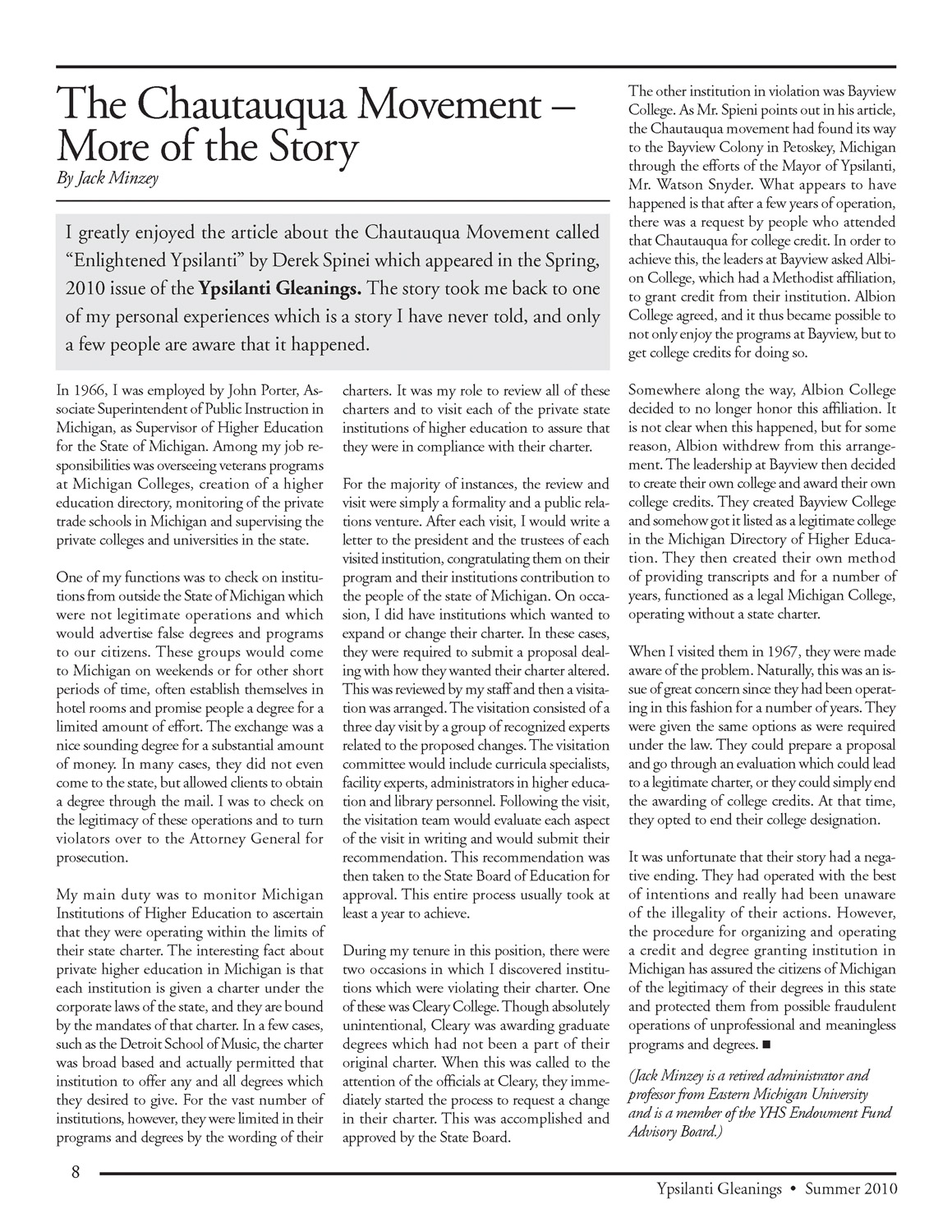 I greatly enjoyed the article about the Chautauqua Movement called “Enlightened Ypsilanti” by Derek Spinei which appeared in the Spring, 2010 issue of the Ypsilanti Gleanings. The story took me back to one of my personal experiences which is a story I have never told, and only a few people are aware that it happened.

In 1966, I was employed by John Porter, Associate Superintendent of Public Instruction in Michigan, as Supervisor of Higher Education for the State of Michigan. Among my job responsibilities was overseeing veterans programs at Michigan Colleges, creation of a higher education directory, monitoring of the private trade schools in Michigan and supervising the private colleges and universities in the state.

One of my functions was to check on institutions from outside the State of Michigan which were not legitimate operations and which would advertise false degrees and programs to our citizens. These groups would come to Michigan on weekends or for other short periods of time, often establish themselves in hotel rooms and promise people a degree for a limited amount of effort. The exchange was a nice sounding degree for a substantial amount of money. In many cases, they did not even come to the state, but allowed clients to obtain a degree through the mail. I was to check on the legitimacy of these operations and to turn violators over to the Attorney General for prosecution.

My main duty was to monitor Michigan Institutions of Higher Education to ascertain that they were operating within the limits of their state charter. The interesting fact about private higher education in Michigan is that each institution is given a charter under the corporate laws of the state, and they are bound by the mandates of that charter. In a few cases, such as the Detroit School of Music, the charter was broad based and actually permitted that institution to offer any and all degrees which they desired to give. For the vast number of institutions, however, they were limited in their programs and degrees by the wording of their charters. It was my role to review all of these charters and to visit each of the private state institutions of higher education to assure that they were in compliance with their charter.

For the majority of instances, the review and visit were simply a formality and a public relations venture. After each visit, I would write a letter to the president and the trustees of each visited institution, congratulating them on their program and their institutions contribution to the people of the state of Michigan. On occasion, I did have institutions which wanted to expand or change their charter. In these cases, they were required to submit a proposal dealing with how they wanted their charter altered. This was reviewed by my staff and then a visitation was arranged. The visitation consisted of a three day visit by a group of recognized experts related to the proposed changes. The visitation committee would include curricula specialists, facility experts, administrators in higher education and library personnel. Following the visit, the visitation team would evaluate each aspect of the visit in writing and would submit their recommendation. This recommendation was then taken to the State Board of Education for approval. This entire process usually took at least a year to achieve.

During my tenure in this position, there were two occasions in which I discovered institutions which were violating their charter. One of these was Cleary College. Though absolutely unintentional, Cleary was awarding graduate degrees which had not been a part of their original charter. When this was called to the attention of the officials at Cleary, they immediately started the process to request a change in their charter. This was accomplished and approved by the State Board.

The other institution in violation was Bayview College. As Mr. Spieni points out in his article, the Chautauqua movement had found its way to the Bayview Colony in Petoskey, Michigan through the efforts of the Mayor of Ypsilanti, Mr. Watson Snyder. What appears to have happened is that after a few years of operation, there was a request by people who attended that Chautauqua for college credit. In order to achieve this, the leaders at Bayview asked Albion College, which had a Methodist affiliation, to grant credit from their institution. Albion College agreed, and it thus became possible to not only enjoy the programs at Bayview, but to get college credits for doing so.

Somewhere along the way, Albion College decided to no longer honor this affiliation. It is not clear when this happened, but for some reason, Albion withdrew from this arrangement. The leadership at Bayview then decided to create their own college and award their own college credits. They created Bayview College and somehow got it listed as a legitimate college in the Michigan Directory of Higher Education. They then created their own method of providing transcripts and for a number of years, functioned as a legal Michigan College, operating without a state charter.

When I visited them in 1967, they were made aware of the problem. Naturally, this was an issue of great concern since they had been operating in this fashion for a number of years. They were given the same options as were required under the law. They could prepare a proposal and go through an evaluation which could lead to a legitimate charter, or they could simply end the awarding of college credits. At that time, they opted to end their college designation.

It was unfortunate that their story had a negative ending. They had operated with the best of intentions and really had been unaware of the illegality of their actions. However, the procedure for organizing and operating a credit and degree granting institution in Michigan has assured the citizens of Michigan of the legitimacy of their degrees in this state and protected them from possible fraudulent operations of unprofessional and meaningless programs and degrees.

(Jack Minzey is a retired administrator and professor from Eastern Michigan University and is a member of the YHS Endowment Fund Advisory Board.)