The First of August Celebration 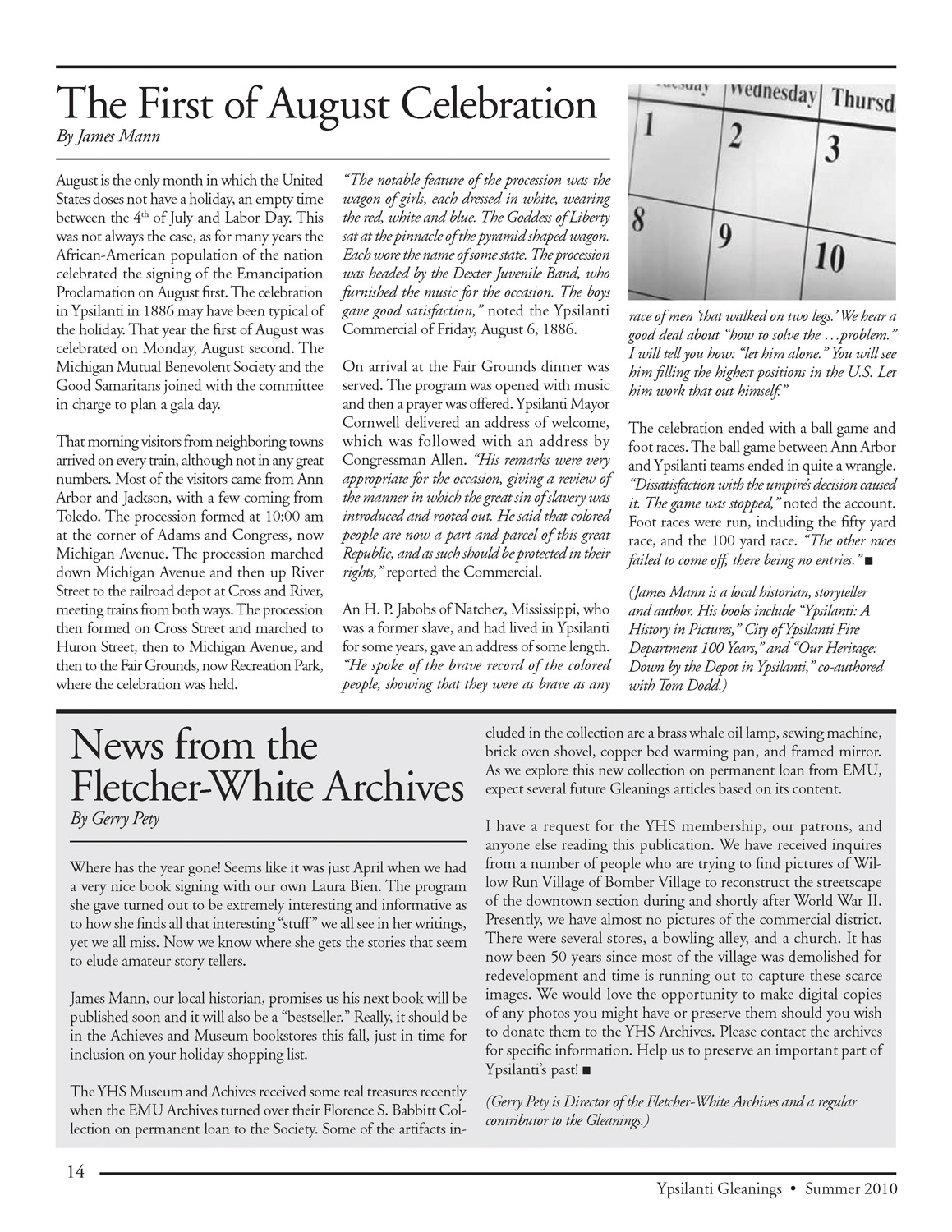 August is the only month in which the United States doses not have a holiday, an empty time between the 4th of July and Labor Day. This was not always the case, as for many years the African-American population of the nation celebrated the signing of the Emancipation Proclamation on August first. The celebration in Ypsilanti in 1886 may have been typical of the holiday. That year the first of August was celebrated on Monday, August second. The Michigan Mutual Benevolent Society and the Good Samaritans joined with the committee in charge to plan a gala day.

That morning visitors from neighboring towns arrived on every train, although not in any great numbers. Most of the visitors came from Ann Arbor and Jackson, with a few coming from Toledo. The procession formed at 10:00 am at the corner of Adams and Congress, now Michigan Avenue. The procession marched down Michigan Avenue and then up River Street to the railroad depot at Cross and River, meeting trains from both ways. The procession then formed on Cross Street and marched to Huron Street, then to Michigan Avenue, and then to the Fair Grounds, now Recreation Park, where the celebration was held.

“The notable feature of the procession was the wagon of girls, each dressed in white, wearing the red, white and blue. The Goddess of Liberty sat at the pinnacle of the pyramid shaped wagon. Each wore the name of some state. The procession was headed by the Dexter Juvenile Band, who furnished the music for the occasion. The boys gave good satisfaction,” noted the Ypsilanti Commercial of Friday, August 6, 1886.

On arrival at the Fair Grounds dinner was served. The program was opened with music and then a prayer was offered. Ypsilanti Mayor Cornwell delivered an address of welcome, which was followed with an address by Congressman Allen. “His remarks were very appropriate for the occasion, giving a review of the manner in which the great sin of slavery was introduced and rooted out. He said that colored people are now a part and parcel of this great Republic, and as such should be protected in their rights,” reported the Commercial.

An H. P. Jabobs of Natchez, Mississippi, who was a former slave, and had lived in Ypsilanti for some years, gave an address of some length. “He spoke of the brave record of the colored people, showing that they were as brave as any race of men ‘that walked on two legs.’ We hear a good deal about “how to solve the …problem.” I will tell you how: “let him alone.” You will see him filling the highest positions in the U.S. Let him work that out himself.”

The celebration ended with a ball game and foot races. The ball game between Ann Arbor and Ypsilanti teams ended in quite a wrangle. “Dissatisfaction with the umpire’s decision caused it. The game was stopped,” noted the account. Foot races were run, including the fifty yard race, and the 100 yard race. “The other races failed to come off, there being no entries.”

(James Mann is a local historian, storyteller and author. His books include “Ypsilanti: A History in Pictures,” City of Ypsilanti Fire Department 100 Years,” and “Our Heritage: Down by the Depot in Ypsilanti,” co-authored with Tom Dodd.)