A Tribute to the Unknown Dead 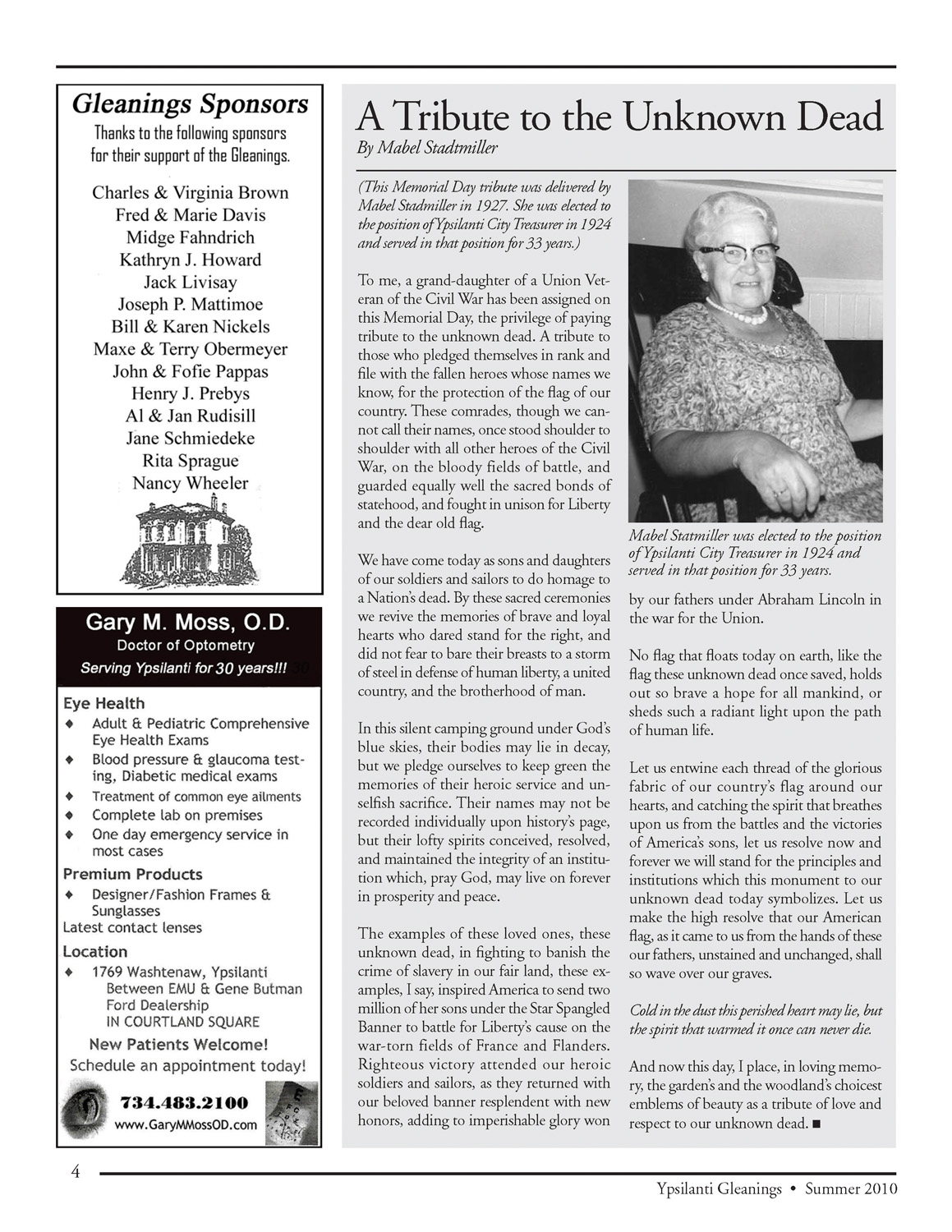 (This Memorial Day tribute was delivered by Mabel Stadmiller in 1927. She was elected to the position of Ypsilanti City Treasurer in 1924 and served in that position for 33 years.) To me, a grand-daughter of a Union Veteran of the Civil War has been assigned on this Memorial Day, the privilege of paying tribute to the unknown dead. A tribute to those who pledged themselves in rank and file with the fallen heroes whose names we know, for the protection of the flag of our country. These comrades, though we cannot call their names, once stood shoulder to shoulder with all other heroes of the Civil War, on the bloody fields of battle, and guarded equally well the sacred bonds of statehood, and fought in unison for Liberty and the dear old flag. We have come today as sons and daughters of our soldiers and sailors to do homage to a Nation’s dead. By these sacred ceremonies we revive the memories of brave and loyal hearts who dared stand for the right, and did not fear to bare their breasts to a storm of steel in defense of human liberty, a united country, and the brotherhood of man. In this silent camping ground under God’s blue skies, their bodies may lie in decay, but we pledge ourselves to keep green the memories of their heroic service and unselfish sacrifice. Their names may not be recorded individually upon history’s page, but their lofty spirits conceived, resolved, and maintained the integrity of an institution which, pray God, may live on forever in prosperity and peace. The examples of these loved ones, these unknown dead, in fighting to banish the crime of slavery in our fair land, these examples, I say, inspired America to send two million of her sons under the Star Spangled Banner to battle for Liberty’s cause on the war-torn fields of France and Flanders. Righteous victory attended our heroic soldiers and sailors, as they returned with our beloved banner resplendent with new honors, adding to imperishable glory won by our fathers under Abraham Lincoln in the war for the Union. No flag that floats today on earth, like the flag these unknown dead once saved, holds out so brave a hope for all mankind, or sheds such a radiant light upon the path of human life. Let us entwine each thread of the glorious fabric of our country’s flag around our hearts, and catching the spirit that breathes upon us from the battles and the victories of America’s sons, let us resolve now and forever we will stand for the principles and institutions which this monument to our unknown dead today symbolizes. Let us make the high resolve that our American flag, as it came to us from the hands of these our fathers, unstained and unchanged, shall so wave over our graves. Cold in the dust this perished heart may lie, but the spirit that warmed it once can never die. And now this day, I place, in loving memory, the garden’s and the woodland’s choicest emblems of beauty as a tribute of love and respect to our unknown dead. Photo Captions: Photo 1: Mabel Statmiller was elected to the position of Ypsilanti City Treasurer in 1924 and served in that position for 33 years.