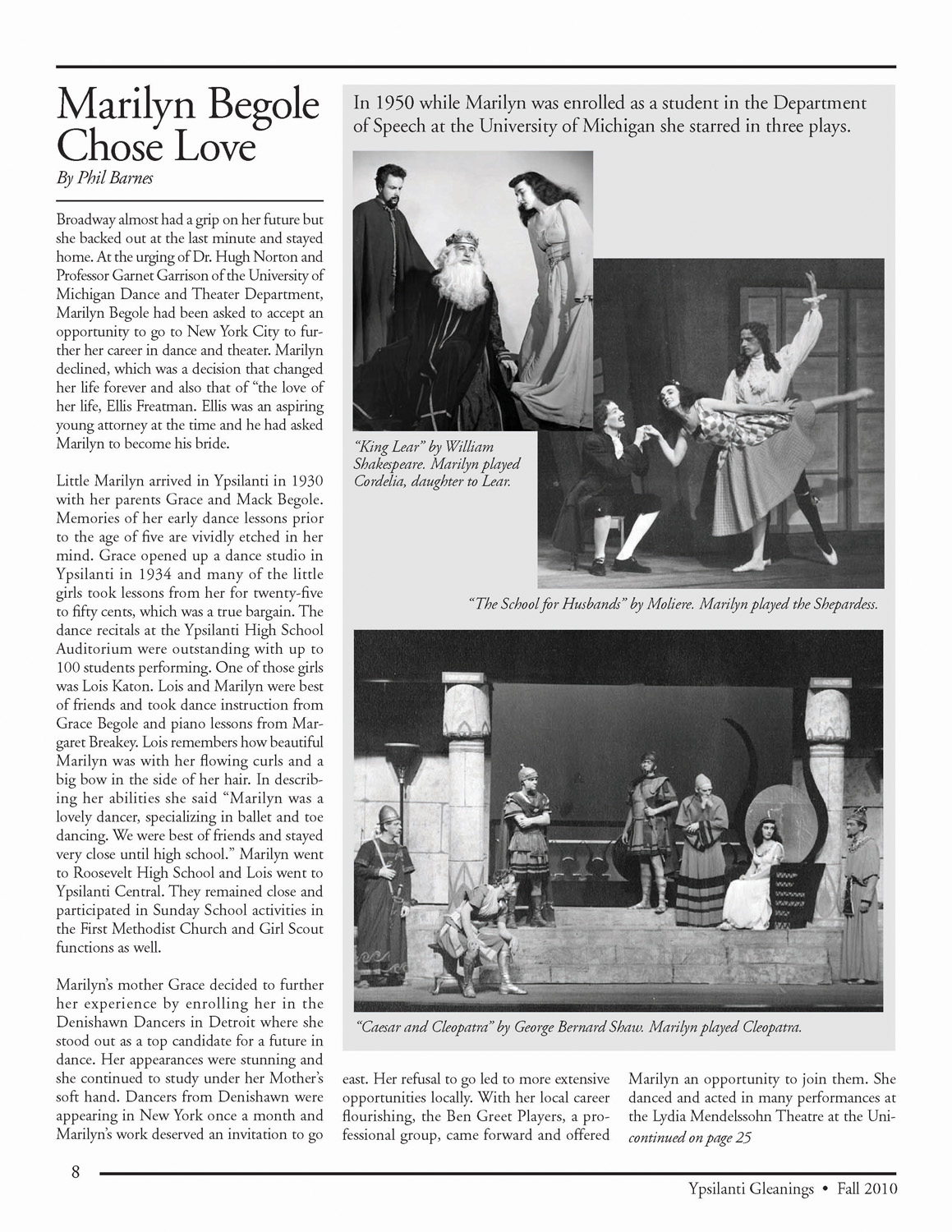 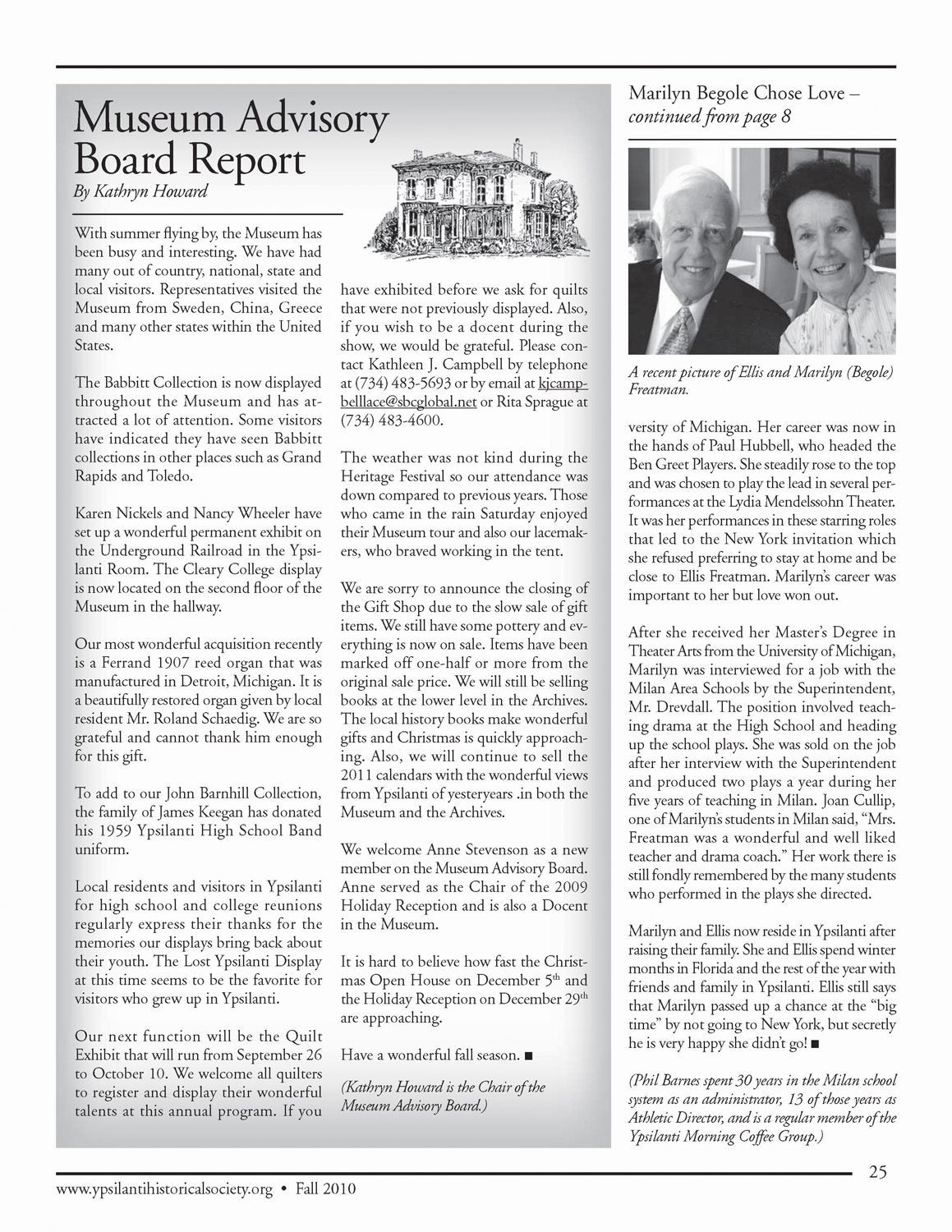 Broadway almost had a grip on her future but she backed out at the last minute and stayed home. At the urging of Dr. Hugh Norton and Professor Garnet Garrison of the University of Michigan Dance and Theater Department, Marilyn Begole had been asked to accept an opportunity to go to New York City to further her career in dance and theater. Marilyn declined, which was a decision that changed her life forever and also that of “the love of her life, Ellis Freatman. Ellis was an aspiring young attorney at the time and he had asked Marilyn to become his bride. Little Marilyn arrived in Ypsilanti in 1930 with her parents Grace and Mack Begole. Memories of her early dance lessons prior to the age of five are vividly etched in her mind. Grace opened up a dance studio in Ypsilanti in 1934 and many of the little girls took lessons from her for twenty-five to fifty cents, which was a true bargain. The dance recitals at the Ypsilanti High School Auditorium were outstanding with up to 100 students performing. One of those girls was Lois Katon. Lois and Marilyn were best of friends and took dance instruction from Grace Begole and piano lessons from Margaret Breakey. Lois remembers how beautiful Marilyn was with her flowing curls and a big bow in the side of her hair. In describing her abilities she said “Marilyn was a lovely dancer, specializing in ballet and toe dancing. We were best of friends and stayed very close until high school.” Marilyn went to Roosevelt High School and Lois went to Ypsilanti Central. They remained close and participated in Sunday School activities in the First Methodist Church and Girl Scout functions as well. Marilyn’s mother Grace decided to further her experience by enrolling her in the Denishawn Dancers in Detroit where she stood out as a top candidate for a future in dance. Her appearances were stunning and she continued to study under her Mother’s soft hand. Dancers from Denishawn were appearing in New York once a month and Marilyn’s work deserved an invitation to go east. Her refusal to go led to more extensive opportunities locally. With her local career flourishing, the Ben Greet Players, a professional group, came forward and offered Marilyn an opportunity to join them. She danced and acted in many performances at the Lydia Mendelssohn Theatre at the University of Michigan. Her career was now in the hands of Paul Hubbell, who headed the Ben Greet Players. She steadily rose to the top and was chosen to play the lead in several performances at the Lydia Mendelssohn Theater. It was her performances in these starring roles that led to the New York invitation which she refused preferring to stay at home and be close to Ellis Freatman. Marilyn’s career was important to her but love won out. After she received her Master’s Degree in Theater Arts from the University of Michigan, Marilyn was interviewed for a job with the Milan Area Schools by the Superintendent, Mr. Drevdall. The position involved teaching drama at the High School and heading up the school plays. She was sold on the job after her interview with the Superintendent and produced two plays a year during her five years of teaching in Milan. Joan Cullip, one of Marilyn’s students in Milan said, “Mrs. Freatman was a wonderful and well liked teacher and drama coach.” Her work there is still fondly remembered by the many students who performed in the plays she directed. Marilyn and Ellis now reside in Ypsilanti after raising their family. She and Ellis spend winter months in Florida and the rest of the year with friends and family in Ypsilanti. Ellis still says that Marilyn passed up a chance at the “big time” by not going to New York, but secretly he is very happy she didn’t go! (Phil Barnes spent 30 years in the Milan school system as an administrator, 13 of those years as Athletic Director, and is a regular member of the Ypsilanti Morning Coffee Group.) Photo Captions: Keith: The first three photos should be grouped so they have a common caption and then each one has their own caption. Photo 1a, 2a and 3a: In 1950 while Marilyn was enrolled as a student in the Department of Speech at the University of Michigan she starred in three plays. Photo 1a, 2a and 3a: In 1950 while Marilyn was enrolled as a student in the Department of Speech at the University of Michigan she starred in three plays.
Photo 1a: “King Lear” by William Shakespeare. Marilyn played Cordelia, daughter to Lear.
Photo 2a: “Caesar and Cleopatra” by George Bernard Shaw. Marilyn played Cleopatra.
Photo 3a: “The School for Husbands” by Moliere. Marilyn played the Shepardess.
Photo 4a: A recent picture of Ellis and Marilyn (Begole) Freatman.