Portrait in the Library 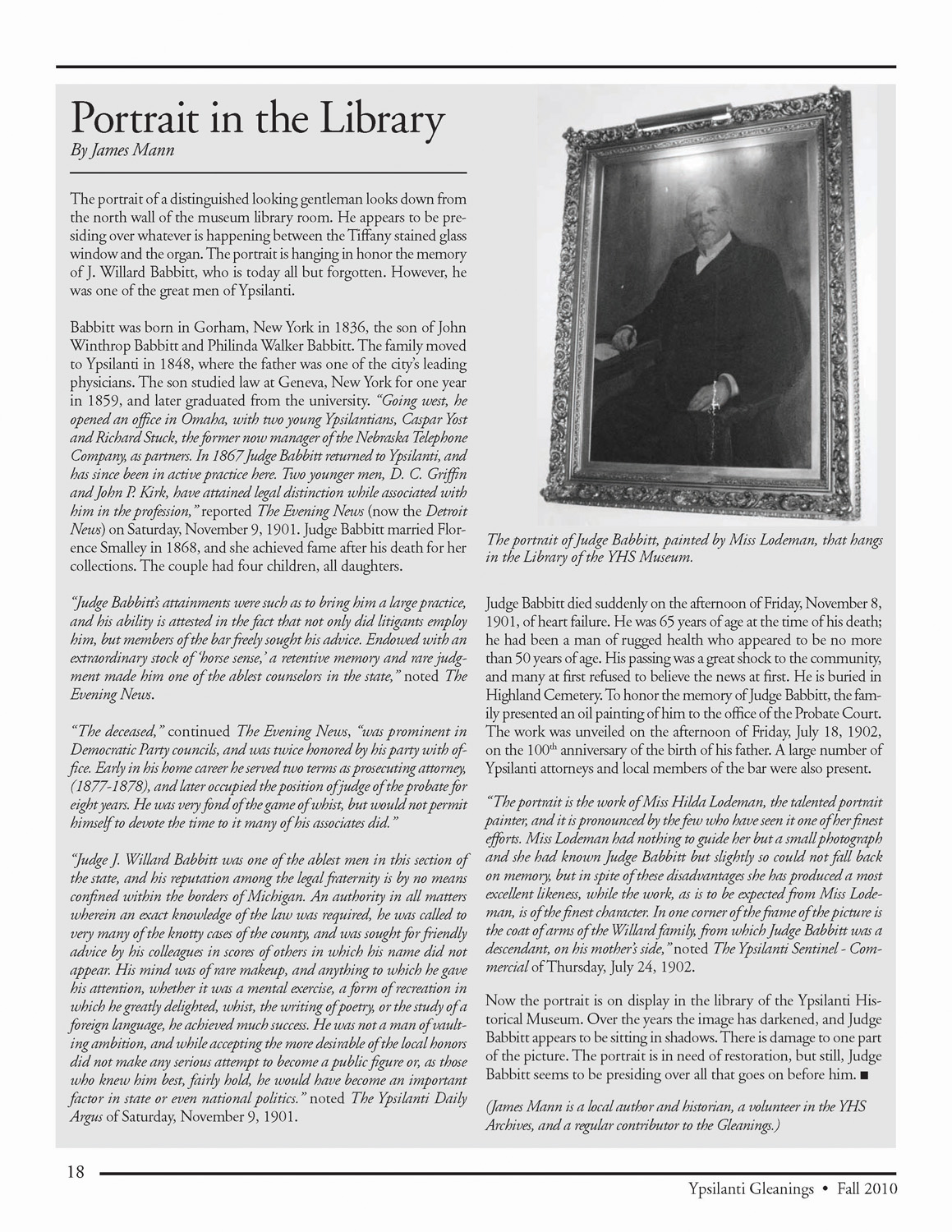 The portrait of a distinguished looking gentleman looks down from the north wall of the museum library room. He appears to be presiding over whatever is happening between the Tiffany stained glass window and the organ. The portrait is hanging to honor the memory of J. Willard Babbitt, who is today all but forgotten. However, he was one of the great men of Ypsilanti. Babbitt was born in Gorham, New York in 1836, the son of John Winthrop Babbitt and Philinda Walker Babbitt. The family moved to Ypsilanti in 1848, where the father was one of the city’s leading physicians. The son studied law at Geneva, New York for one year in 1859, and later graduated from the university. “Going west, he opened an office in Omaha, with two young Ypsilantians, Caspar Yost and Richard Stuck, the former now manager of the Nebraska Telephone Company, as partners. In 1867 Judge Babbitt returned to Ypsilanti, and has since been in active practice here. Two younger men, D. C. Griffin and John P. Kirk, have attained legal distinction while associated with him in the profession,” reported The Evening News (now the Detroit News) on Saturday, November 9, 1901. Judge Babbitt married Florence Smalley in 1868, and she achieved fame after his death for her collections. The couple had four children, all daughters. “Judge Babbitt’s attainments were such as to bring him a large practice, and his ability is attested in the fact that not only did litigants employ him, but members of the bar freely sought his advice. Endowed with an extraordinary stock of ‘horse sense,’ a retentive memory and rare judgment made him one of the ablest counselors in the state,” noted The Evening News. “The deceased,” continued The Evening News, “was prominent in Democratic Party councils, and was twice honored by his party with office. Early in his home career he served two terms as prosecuting attorney, (1877-1878), and later occupied the position of judge of the probate for eight years. He was very fond of the game of whist, but would not permit himself to devote the time to it many of his associates did.” “Judge J. Willard Babbitt was one of the ablest men in this section of the state, and his reputation among the legal fraternity is by no means confined within the borders of Michigan. An authority in all matters wherein an exact knowledge of the law was required, he was called to very many of the knotty cases of the county, and was sought for friendly advice by his colleagues in scores of others in which his name did not appear. His mind was of rare makeup, and anything to which he gave his attention, whether it was a mental exercise, a form of recreation in which he greatly delighted, whist, the writing of poetry, or the study of a foreign language, he achieved much success. He was not a man of vaulting ambition, and while accepting the more desirable of the local honors did not make any serious attempt to become a public figure or, as those who knew him best, fairly hold, he would have become an important factor in state or even national politics.” noted The Ypsilanti Daily Argus of Saturday, November 9, 1901. Judge Babbitt died suddenly on the afternoon of Friday, November 8, 1901, of heart failure. He was 65 years of age at the time of his death; he had been a man of rugged health who appeared to be no more than 50 years of age. His passing was a great shock to the community, and many at first refused to believe the news. He is buried in Highland Cemetery. To honor the memory of Judge Babbitt, the family presented an oil painting of him to the office of the Probate Court. The work was unveiled on the afternoon of Friday, July 18, 1902, on the 100th anniversary of the birth of his father. A large number of Ypsilanti attorneys and local members of the bar were also present. “The portrait is the work of Miss Hilda Lodeman, the talented portrait painter, and it is pronounced by the few who have seen it one of her finest efforts. Miss Lodeman had nothing to guide her but a small photograph and she had known Judge Babbitt but slightly so could not fall back on memory, but in spite of these disadvantages she has produced a most excellent likeness, while the work, as is to be expected from Miss Lodeman, is of the finest character. In one corner of the frame of the picture is the coat of arms of the Willard family, from which Judge Babbitt was a descendant, on his mother’s side,” noted The Ypsilanti Sentinel - Commercial of Thursday, July 24, 1902. Now the portrait is on display in the library of the Ypsilanti Historical Museum. Over the years the image has darkened, and Judge Babbitt appears to be sitting in shadows. There is damage to one part of the picture. The portrait is in need of restoration, but still, Judge Babbitt seems to be presiding over all that goes on before him. (James Mann is a local author and historian, a volunteer in the YHS Archives, and a regular contributor to the Gleanings.) Photo Captions: Photo 1: The portrait of Judge Babbitt, painted by Miss Lodeman, that hangs in the Library of the YHS Museum.