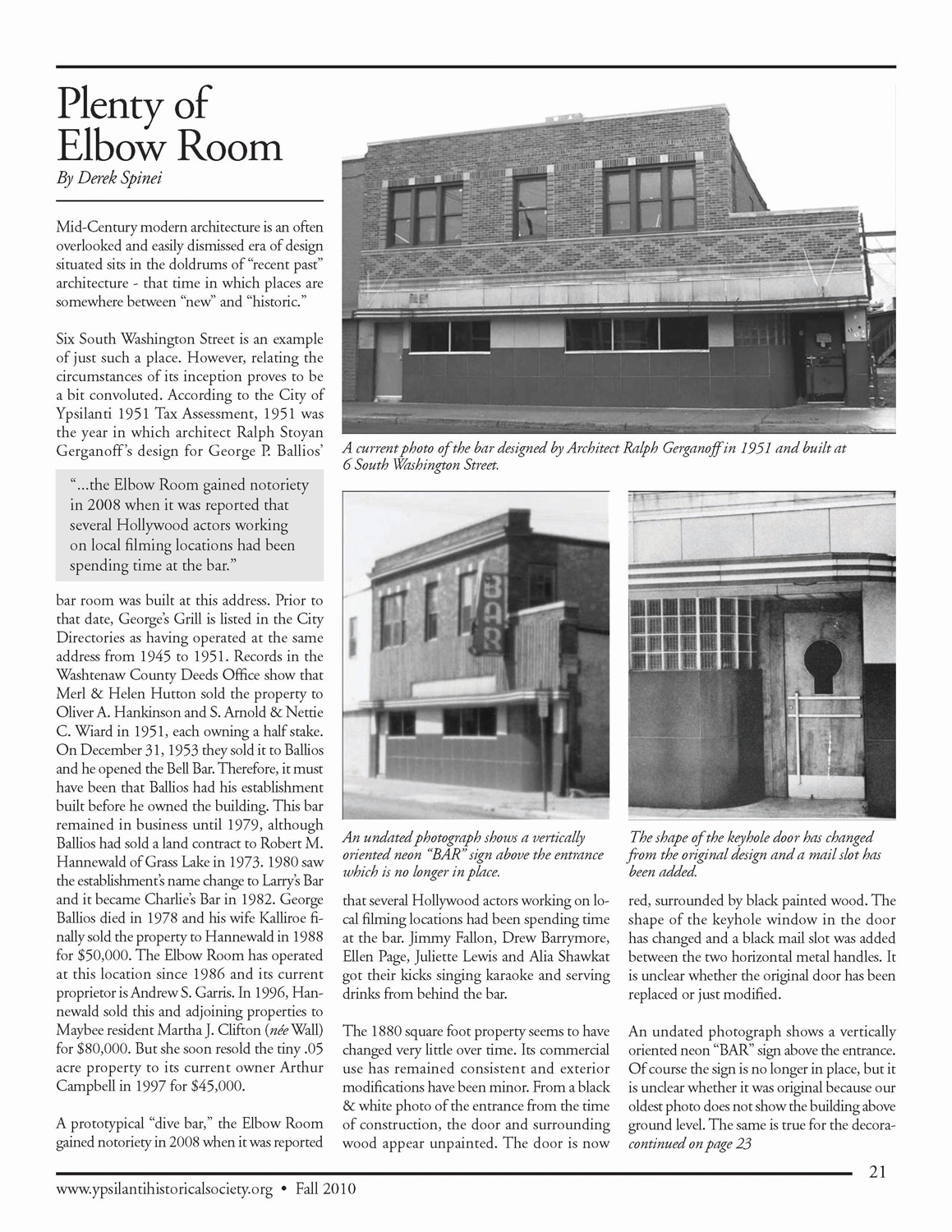 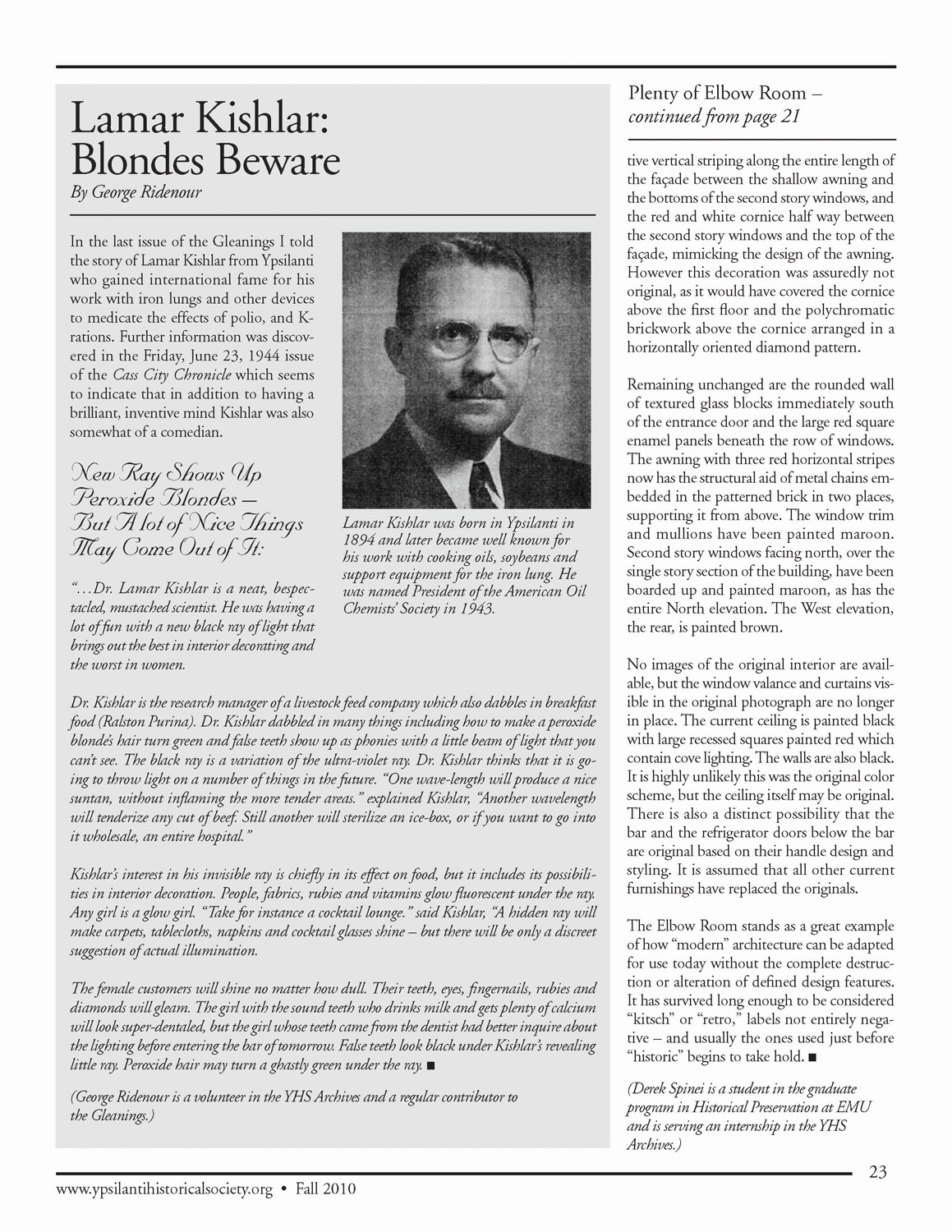 Mid-Century modern architecture is an often overlooked and easily dismissed era of design situated in the doldrums of “recent past” architecture - that time in which places are somewhere between “new” and “historic.” Six South Washington Street is an example of just such a place. However, relating the circumstances of its inception proves to be a bit convoluted. According to the City of Ypsilanti 1951 Tax Assessment, 1951 was the year in which architect Ralph Stoyan Gerganoff’s design for George P. Ballios’ bar room was built at this address. Prior to that date, George’s Grill is listed in the City Directories as having operated at the same address from 1945 to 1951. Records in the Washtenaw County Deeds Office show that Merl & Helen Hutton sold the property to Oliver A. Hankinson and S. Arnold & Nettie C. Wiard in 1951, each owning a half stake. On December 31, 1953 they sold it to Ballios and he opened the Bell Bar. Therefore, it must have been that Ballios had his establishment built before he owned the building. This bar remained in business until 1979, although Ballios had sold a land contract to Robert M. Hannewald of Grass Lake in 1973. 1980 saw the establishment’s name change to Larry’s Bar and it became Charlie’s Bar in 1982. George Ballios died in 1978 and his wife Kalliroe finally sold the property to Hannewald in 1988 for $50,000. The Elbow Room has operated at this location since 1986 and its current proprietor is Andrew S. Garris. In 1996, Hannewald sold this and adjoining properties to Maybee resident Martha J. Clifton (née Wall) for $80,000. But she soon resold the tiny .05 acre property to its current owner Arthur Campbell in 1997 for $45,000. A prototypical “dive bar,” the Elbow Room gained notoriety in 2008 when it was reported that several Hollywood actors working on local filming locations had been spending time at the bar. Jimmy Fallon, Drew Barrymore, Ellen Page, Juliette Lewis and Alia Shawkat got their kicks singing karaoke and serving drinks from behind the bar. The 1880 square foot property seems to have changed very little over time. Its commercial use has remained consistent and exterior modifications have been minor. From a black & white photo of the entrance from the time of construction, the door and surrounding wood appear unpainted. The door is now red, surrounded by black painted wood. The shape of the keyhole window in the door has changed and a black mail slot was added between the two horizontal metal handles. It is unclear whether the original door has been replaced or just modified. An undated photograph shows a vertically oriented neon “BAR” sign above the entrance. Of course the sign is no longer in place, but it is unclear whether it was original because our oldest photo does not show the building above ground level. The same is true for the decorative vertical striping along the entire length of the façade between the shallow awning and the bottoms of the second story windows, and the red and white cornice half way between the second story windows and the top of the façade, mimicking the design of the awning. However this decoration was assuredly not original, as it would have covered the cornice above the first floor and the polychromatic brickwork above the cornice arranged in a horizontally oriented diamond pattern. Remaining unchanged are the rounded wall of textured glass blocks immediately south of the entrance door and the large red square enamel panels beneath the row of windows. The awning with three red horizontal stripes now has the structural aid of metal chains embedded in the patterned brick in two places, supporting it from above. The window trim and mullions have been painted maroon. Second story windows facing north, over the single story section of the building, have been boarded up and painted maroon, as has the entire North elevation. The West elevation, the rear, is painted brown. No images of the original interior are available, but the window valance and curtains visible in the original photograph are no longer in place. The current ceiling is painted black with large recessed squares painted red which contain cove lighting. The walls are also black. It is highly unlikely this was the original color scheme, but the ceiling itself may be original. There is also a distinct possibility that the bar and the refrigerator doors below the bar are original based on their handle design and styling. It is assumed that all other current furnishings have replaced the originals. The Elbow Room stands as a great example of how “modern” architecture can be adapted for use today without the complete destruction or alteration of defined design features. It has survived long enough to be considered “kitsch” or “retro,” labels not entirely negative – and usually the ones used just before “historic” begins to take hold. (Derek Spinei is a student in the graduate program in Historical Preservation at EMU and is serving an internship in the YHS Archives.)
Photo Captions:
Photo 1: A current photo of the bar designed by Architect Ralph Gerganoff in 1951 and built at 6 South Washington Street.

Photo 2: An undated photograph shows a vertically oriented neon “BAR” sign above the entrance which is no longer in place.

Photo 3: The shape of the keyhole door has changed from the original design and a mail slot has been added.