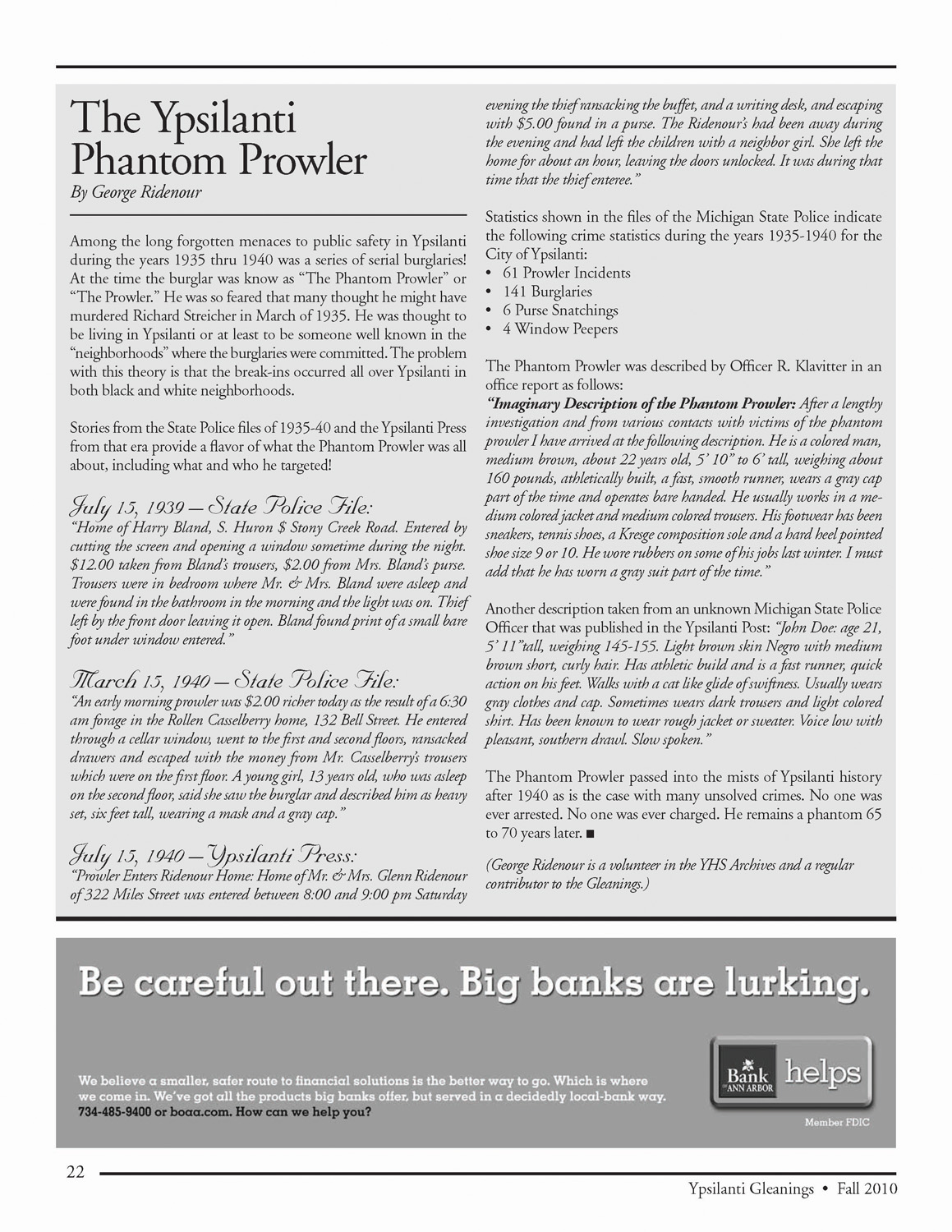 Among the long forgotten menaces to public safety in Ypsilanti during the years 1935 thru 1940 was a series of serial burglaries! At the time the burglar was known as “The Phantom Prowler” or “The Prowler.” He was so feared that many thought he might have murdered Richard Streicher in March of 1935. He was thought to be living in Ypsilanti or at least to be someone well known in the “neighborhoods” where the burglaries were committed. The problem with this theory is that the break-ins occurred all over Ypsilanti in both black and white neighborhoods.

Stories from the State Police files of 1935-40 and the Ypsilanti Press from that era provide a flavor of what the Phantom Prowler was all about, including what and who he targeted!

July 15, 1939 – State Police File: “Home of Harry Bland, S. Huron & Stony Creek Road. Entered by cutting the screen and opening a window sometime during the night. $12.00 taken from Bland’s trousers, $2.00 from Mrs. Bland’s purse. Trousers were in bedroom where Mr. & Mrs. Bland were asleep and were found in the bathroom in the morning and the light was on. Thief left by the front door leaving it open. Bland found print of a small bare foot under window entered.”

March 15, 1940 – State Police File: “An early morning prowler was $2.00 richer today as the result of a 6:30 am forage in the Rollen Casselberry home, 132 Bell Street. He entered through a cellar window, went to the first and second floors, ransacked drawers and escaped with the money from Mr. Casselberry’s trousers which were on the first floor. A young girl, 13 years old, who was asleep on the second floor, said she saw the burglar and described him as heavy set, six feet tall, wearing a mask and a gray cap.”

July 15, 1940 – Ypsilanti Press: “Prowler Enters Ridenour Home: Home of Mr. & Mrs. Glenn Ridenour of 322 Miles Street was entered between 8:00 and 9:00 pm Saturday evening the thief ransacking the buffet, and a writing desk, and escaping with $5.00 found in a purse. The Ridenour’s had been away during the evening and had left the children with a neighbor girl. She left the home for about an hour, leaving the doors unlocked. It was during that time that the thief enteree.”

Statistics shown in the files of the Michigan State Police indicate the following crime statistics during the years 1935-1940 for the City of Ypsilanti:

The Phantom Prowler was described by Officer R. Klavitter in an office report as follows:
“Imaginary Description of the Phantom Prowler: After a lengthy investigation and from various contacts with victims of the phantom prowler I have arrived at the following description. He is a colored man, medium brown, about 22 years old, 5’ 10” to 6’ tall, weighing about 160 pounds, athletically built, a fast, smooth runner, wears a gray cap part of the time and operates bare handed. He usually works in a medium colored jacket and medium colored trousers. His footwear has been sneakers, tennis shoes, a Kresge composition sole and a hard heel pointed shoe size 9 or 10. He wore rubbers on some of his jobs last winter. I must add that he has worn a gray suit part of the time.”

The Phantom Prowler passed into the mists of Ypsilanti history after 1940 as is the case with many unsolved crimes. No one was ever arrested. No one was ever charged. He remains a phantom 65 to 70 years later.

(George Ridenour is a volunteer in the YHS Archives and a regular contributor to the Gleanings.)