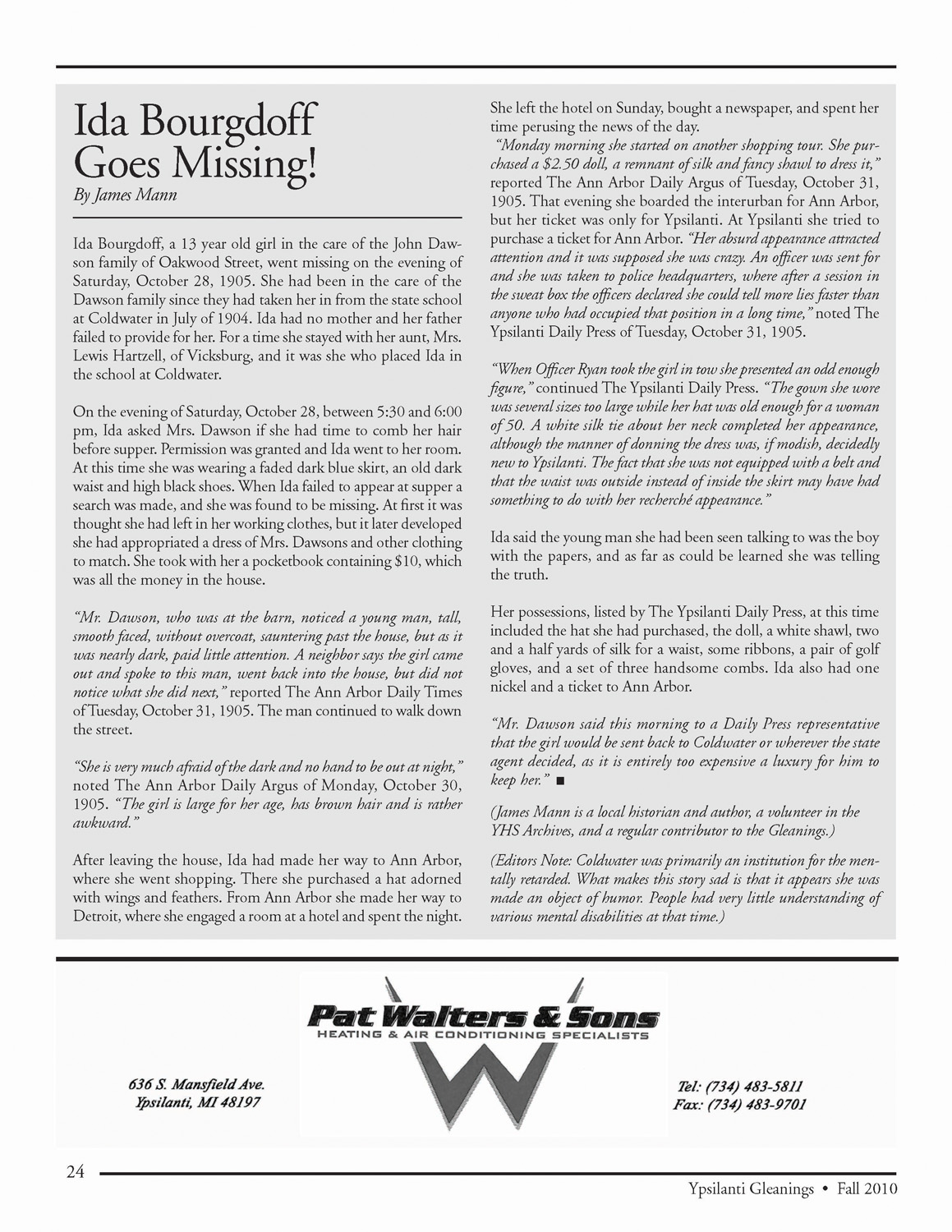 Ida Bourgdoff, a 13 year old girl in the care of the John Dawson family of Oakwood Street, went missing on the evening of Saturday, October 28, 1905. She had been in the care of the Dawson family since they had taken her in from the state school at Coldwater in July of 1904. Ida had no mother and her father failed to provide for her. For a time she stayed with her aunt, Mrs. Lewis Hartzell, of Vicksburg, and it was she who placed Ida in the school at Coldwater.

On the evening of Saturday, October 28, between 5:30 and 6:00 pm, Ida asked Mrs. Dawson if she had time to comb her hair before supper. Permission was granted and Ida went to her room. At this time she was wearing a faded dark blue skirt, an old dark waist and high black shoes. When Ida failed to appear at supper a search was made, and she was found to be missing. At first it was thought she had left in her working clothes, but it later developed she had appropriated a dress of Mrs. Dawsons and other clothing to match. She took with her a pocketbook containing $10, which was all the money in the house.

“Mr. Dawson, who was at the barn, noticed a young man, tall, smooth faced, without overcoat, sauntering past the house, but as it was nearly dark, paid little attention. A neighbor says the girl came out and spoke to this man, went back into the house, but did not notice what she did next,” reported The Ann Arbor Daily Times of Tuesday, October 31, 1905. The man continued to walk down the street.

“She is very much afraid of the dark and no hand to be out at night,” noted The Ann Arbor Daily Argus of Monday, October 30, 1905. “The girl is large for her age, has brown hair and is rather awkward.”

After leaving the house, Ida had made her way to Ann Arbor, where she went shopping. There she purchased a hat adorned with wings and feathers. From Ann Arbor she made her way to Detroit, where she engaged a room at a hotel and spent the night. She left the hotel on Sunday, bought a newspaper, and spent her time perusing the news of the day.

“Monday morning she started on another shopping tour. She purchased a $2.50 doll, a remnant of silk and fancy shawl to dress it,” reported The Ann Arbor Daily Argus of Tuesday, October 31, 1905. That evening she boarded the interurban for Ann Arbor, but her ticket was only for Ypsilanti. At Ypsilanti she tried to purchase a ticket for Ann Arbor. “Her absurd appearance attracted attention and it was supposed she was crazy. An officer was sent for and she was taken to police headquarters, where after a session in the sweat box the officers declared she could tell more lies faster than anyone who had occupied that position in a long time,” noted The Ypsilanti Daily Press of Tuesday, October 31, 1905.

“When Officer Ryan took the girl in tow she presented an odd enough figure,” continued The Ypsilanti Daily Press. “The gown she wore was several sizes too large while her hat was old enough for a woman of 50. A white silk tie about her neck completed her appearance, although the manner of donning the dress was, if modish, decidedly new to Ypsilanti. The fact that she was not equipped with a belt and that the waist was outside instead of inside the skirt may have had something to do with her recherché appearance.”

Ida said the young man she had been seen talking to was the boy with the papers, and as far as could be learned she was telling the truth.

Her possessions, listed by The Ypsilanti Daily Press, at this time included the hat she had purchased, the doll, a white shawl, two and a half yards of silk for a waist, some ribbons, a pair of golf gloves, and a set of three handsome combs. Ida also had one nickel and a ticket to Ann Arbor.

“Mr. Dawson said this morning to a Daily Press representative that the girl would be sent back to Coldwater or wherever the state agent decided, as it is entirely too expensive a luxury for him to keep her.”

(Editors Note: Coldwater was primarily an institution for the mentally retarded. What makes this story sad is that it appears she was made an object of humor. People had very little understanding of various mental disabilities at that time.)