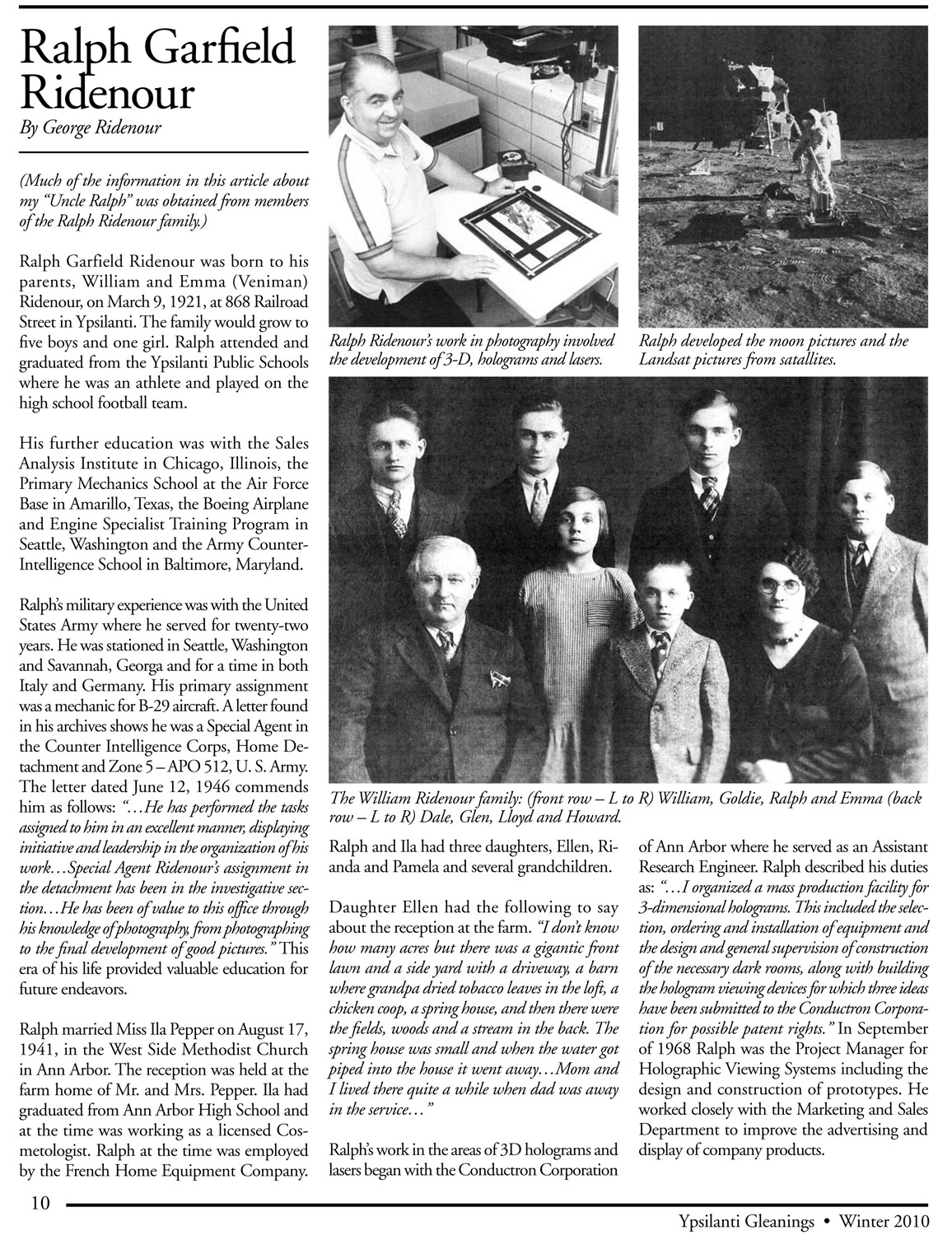 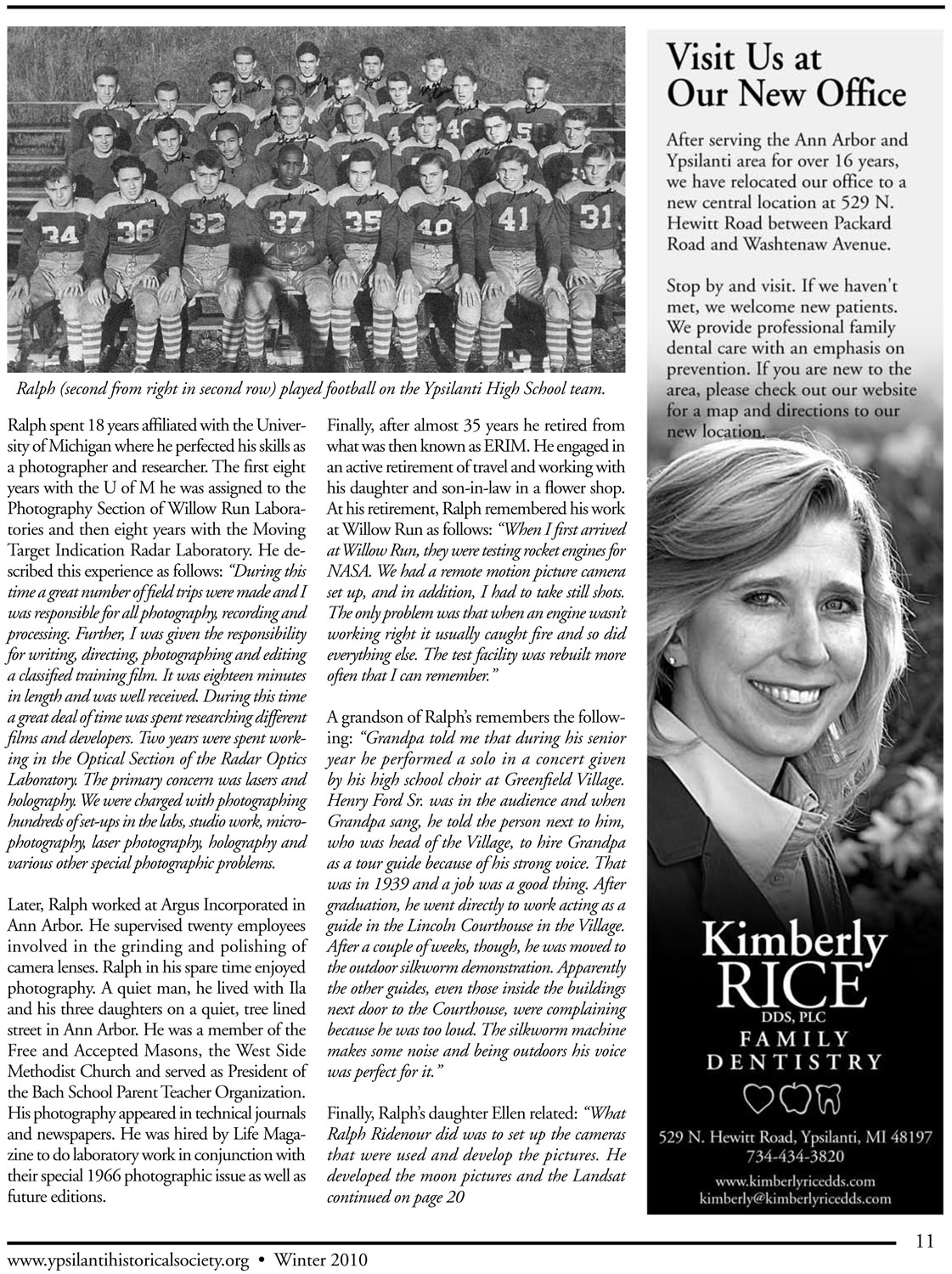 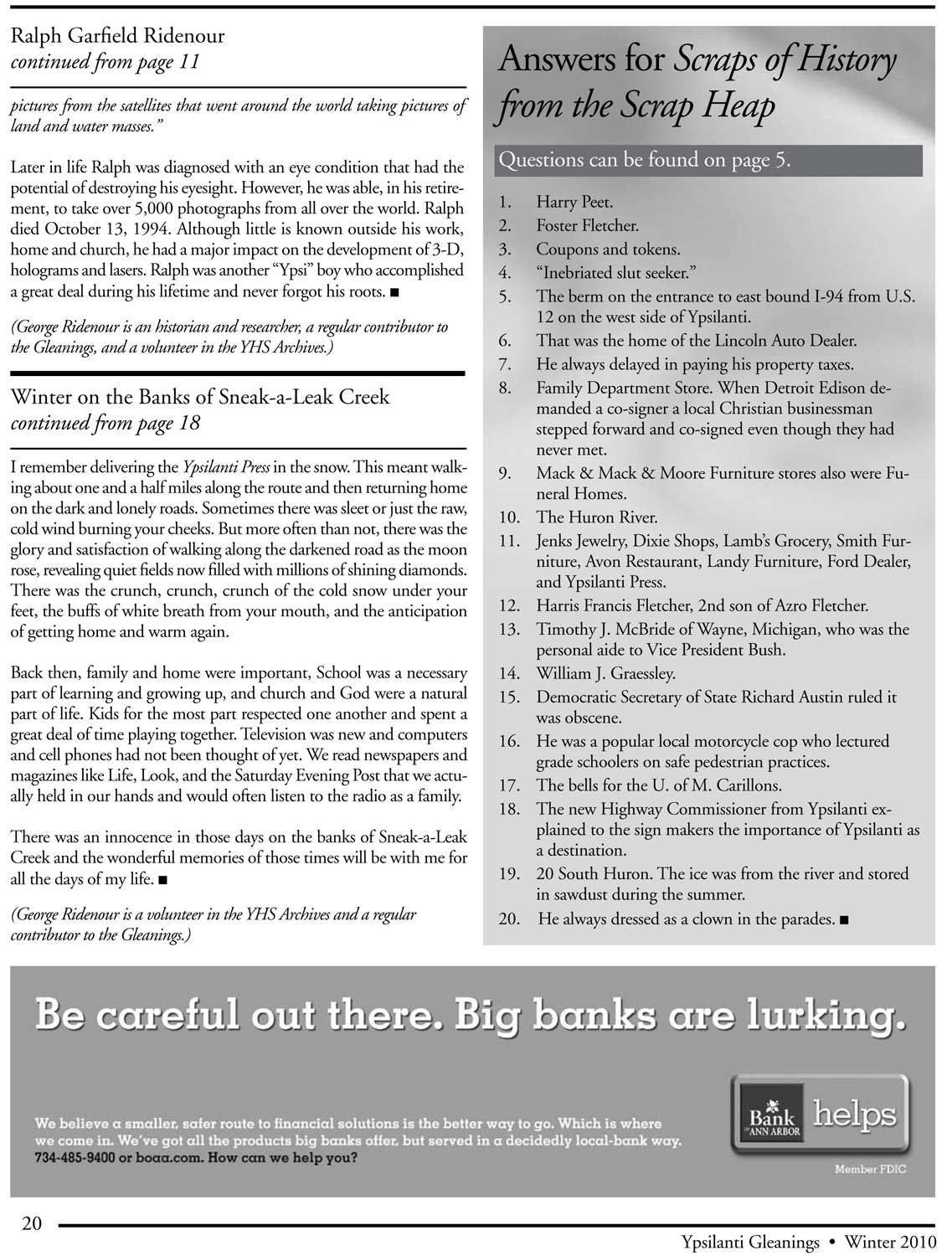 (Much of the information in this article about my “Uncle Ralph” was obtained from members of the Ralph Ridenour family.)

Ralph Garfield Ridenour was born to his parents, William and Emma (Veniman) Ridenour, on March 9, 1921, at 868 Railroad Street in Ypsilanti. The family would grow to five boys and one girl. Ralph attended and graduated from the Ypsilanti Public Schools where he was an athlete and played on the high school football team.

His further education was with the Sales Analysis Institute in Chicago, Illinois, the Primary Mechanics School at the Air Force Base in Amarillo, Texas, the Boeing Airplane and Engine Specialist Training Program in Seattle, Washington and the Army Counter-Intelligence School in Baltimore, Maryland.

Ralph’s military experience was with the United States Army where he served for twenty-two years. He was stationed in Seattle, Washington and Savannah, Georga and for a time in both Italy and Germany. His primary assignment was a mechanic for B-29 aircraft. A letter found in his archives shows he was a Special Agent in the Counter Intelligence Corps, Home Detachment and Zone 5 – APO 512, U. S. Army. The letter dated June 12, 1946 commends him as follows: “…He has performed the tasks assigned to him in an excellent manner, displaying initiative and leadership in the organization of his work…Special Agent Ridenour’s assignment in the detachment has been in the investigative section…He has been of value to this office through his knowledge of photography, from photographing to the final development of good pictures.” This era of his life provided valuable education for future endeavors.

Ralph married to Miss Ila Pepper on August 17, 1941, in the West Side Methodist Church in Ann Arbor. The reception was held at the farm home of Mr. and Mrs. Pepper. Ila had graduated from Ann Arbor High School and at the time was working as a licensed Cosmetologist. Ralph at the time was employed by the French Home Equipment Company. Ralph and Ila had three daughters, Ellen, Rianda and Pamela and several grandchildren.

Daughter Ellen had the following to say about the reception at the farm. “I don’t know how many acres but there was a gigantic front lawn and a side yard with a driveway, a barn where grandpa dried tobacco leaves in the loft, a chicken coop, a spring house, and then there were the fields, woods and a stream in the back. The spring house was small and when the water got piped into the house it went away…Mom and I lived there quite a while when dad was away in the service…”

Ralph’s work in the areas of 3D holograms and lasers began with the Conductron Corporation of Ann Arbor where he served as an Assistant Research Engineer. Ralph described his duties as: “…I organized a mass production facility for 3-dimensional holograms. This included the selection, ordering and installation of equipment and the design and general supervision of construction of the necessary dark rooms, along with building the hologram viewing devices for which three ideas have been submitted to the Conductron Corporation for possible patent rights.” In September of 1968 Ralph was the Project Manager for Holographic Viewing Systems including the design and construction of prototypes. He worked closely with the Marketing and Sales Department to improve the advertising and display of company products.

Ralph spent 18 years affiliated with the University of Michigan where he perfected his skills as a photographer and researcher. The first eight years with the U of M he was assigned to the Photography Section of Willow Run Laboratories and then eight years with the Moving Target Indication Radar Laboratory. He described this experience as follows: “During this time a great number of field trips were made and I was responsible for all photography, recording and processing. Further, I was given the responsibility for writing, directing, photographing and editing a classified training film. It was eighteen minutes in length and was well received. During this time a great deal of time was spent researching different films and developers. Two years were spent working in the Optical Section of the Radar Optics Laboratory. The primary concern was lasers and holography. We were charged with photographing hundreds of set-ups in the labs, studio work, micro-photography, laser photography, holography and various other special photographic problems.

Later, Ralph worked at Argus Incorporated in Ann Arbor. He supervised twenty employees involved in the grinding and polishing of camera lenses. Ralph in his spare time enjoyed photography. A quiet man, he lived with Ila and his three daughters on a quiet, tree lined street in Ann Arbor. He was a member of the Free and Accepted Masons, the West Side Methodist Church and served as President of the Bach School Parent Teacher Organization. His photography appeared in technical journals and newspapers. He was hired by Life Magazine to do laboratory work in conjunction with their special 1966 photographic issue as well as future editions.

Finally, after almost 35 years he retired from what was then known as ERIM. He engaged in an active retirement of travel and working with his daughter and son-in-law in a flower shop. At his retirement, Ralph remembered his work at Willow Run as follows: “When I first arrived at Willow Run, they were testing rocket engines for NASA. We had a remote motion picture camera set up, and in addition, I had to take still shots. The only problem was that when an engine wasn’t working right it usually caught fire and so did everything else. The test facility was rebuilt more often that I can remember.”

A grandson of Ralph’s remembers the following: “Grandpa told me that during his senior year he performed a solo in a concert given by his high school choir at Greenfield Village. Henry Ford Sr. was in the audience and when Grandpa sang, he told the person next to him, who was head of the Village, to hire Grandpa as a tour guide because of his strong voice. That was in 1939 and a job was a good thing. After graduation, he went directly to work acting as a guide in the Lincoln Courthouse in the Village. After a couple of weeks, though, he was moved to the outdoor silkworm demonstration. Apparently the other guides, even those inside the buildings next door to the Courthouse, were complaining because he was too loud. The silkworm machine makes some noise and being outdoors his voice was perfect for it.”

Finally, Ralph’s daughter Ellen related: “What Ralph Ridenour did was to set up the cameras that were used and develop the pictures. He developed the moon pictures and the Landsat pictures from the satellites that went around the world taking pictures of land and water masses.”

Later in life Ralph was diagnosed with an eye condition that had the potential of destroying his eyesight. However, he was able, in his retirement, to take over 5,000 photographs from all over the world. Ralph died October 13, 1994. Although little is known outside his work, home and church, he had a major impact on the development of 3-D, holograms and lasers. Ralph was another “Ypsi” boy who accomplished a great deal during his lifetime and never forgot his roots.

(George Ridenour is an historian and researcher, a regular contributor to the Gleanings, and a volunteer in the YHS Archives.)

Photo 3: Ralph developed the moon pictures and the Landsat pictures from satallites.