The Visit to Ypsilanti by George Francis Train 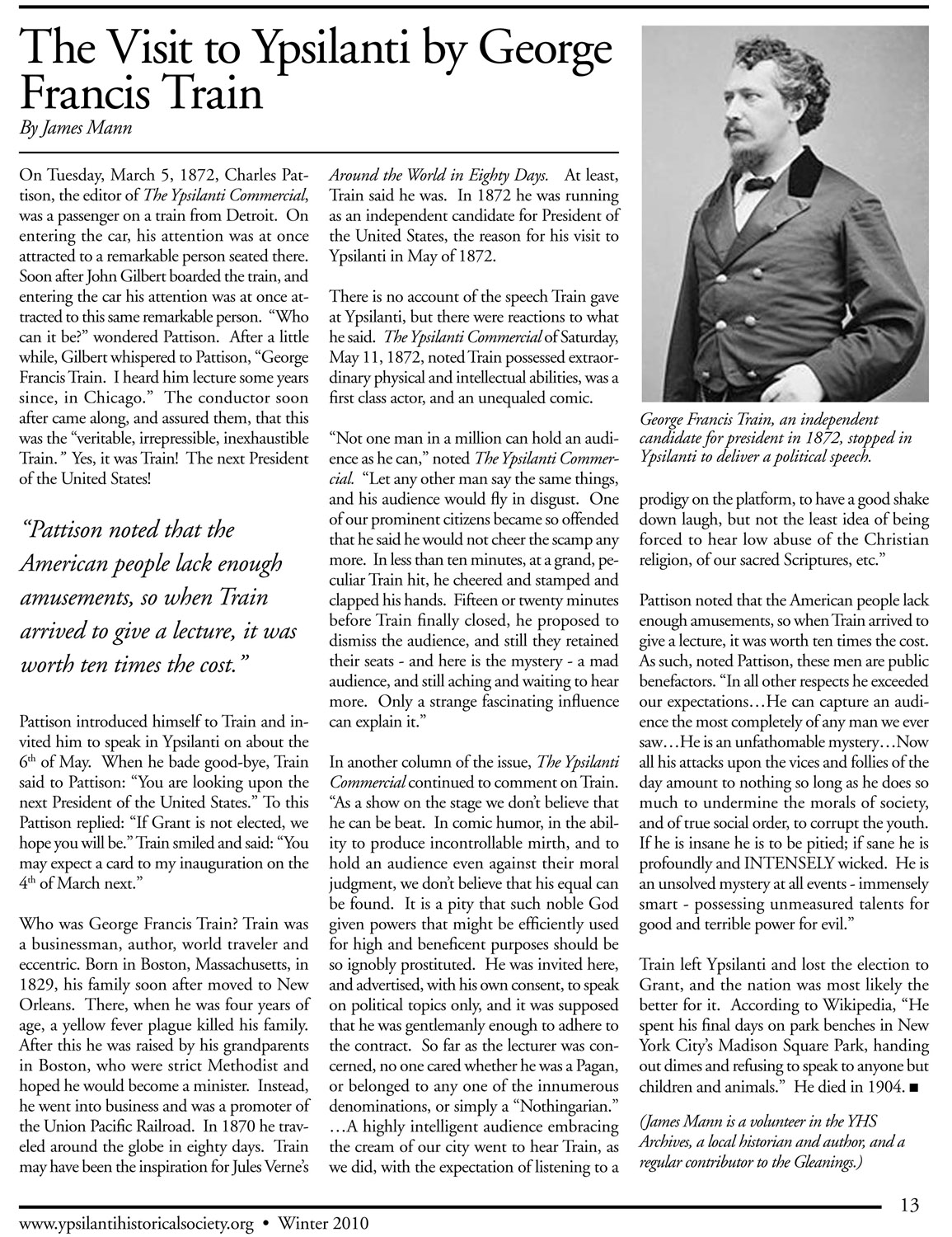 On Tuesday, March 5, 1872, Charles Pattison, the editor of The Ypsilanti Commercial, was a passenger on a train from Detroit.  On entering the car, his attention was at once attracted to a remarkable person seated there.  Soon after John Gilbert boarded the train, and entering the car his attention was at once attracted to this same remarkable person.  “Who can it be?” wondered Pattison.  After a little while, Gilbert whispered to Pattison, “George Francis Train.  I heard him lecture some years since, in Chicago.”  The conductor soon after came along, and assured them, that this was the “veritable, irrepressible, inexhaustible Train.” Yes, it was Train!  The next President of the United States! Pattison introduced himself to Train and invited him to speak in Ypsilanti on about the 6th of May.  When he bade good-bye, Train said to Pattison: “You are looking upon the next President of the United States.” To this Pattison replied: “If Grant is not elected, we hope you will be.” Train smiled and said: “You may expect a card to my inauguration on the 4th of March next.” Who was George Francis Train? Train was a businessman, author, world traveler and eccentric. Born in Boston, Massachusetts, in 1829, his family soon after moved to New Orleans.  There, when he was four years of age, a yellow fever plague killed his family.  After this he was raised by his grandparents in Boston, who were strict Methodist and hoped he would become a minister.  Instead, he went into business and was a promoter of the Union Pacific Railroad.  In 1870 he traveled around the globe in eighty days.  Train may have been the inspiration for Jules Verne’s Around the World in Eighty Days. At least, Train said he was.  In 1872 he was running as an independent candidate for President of the United States, the reason for his visit to Ypsilanti in May of 1872. There is no account of the speech Train gave at Ypsilanti, but there were reactions to what he said.  The Ypsilanti Commercial of Saturday, May 11, 1872, noted Train possessed extraordinary physical and intellectual abilities, was a first class actor, and an unequaled comic. “Not one man in a million can hold an audience as he can,” noted The Ypsilanti Commercial. “Let any other man say the same things, and his audience would fly in disgust.  One of our prominent citizens became so offended that he said he would not cheer the scamp any more.  In less than ten minutes, at a grand, peculiar Train hit, he cheered and stamped and clapped his hands.  Fifteen or twenty minutes before Train finally closed, he proposed to dismiss the audience, and still they retained their seats - and here is the mystery - a mad audience, and still aching and waiting to hear more.  Only a strange fascinating influence can explain it.” In another column of the issue, The Ypsilanti Commercial continued to comment on Train.  “As a show on the stage we don’t believe that he can be beat.  In comic humor, in the ability to produce incontrollable mirth, and to hold an audience even against their moral judgment, we don’t believe that his equal can be found.  It is a pity that such noble God given powers that might be efficiently used for high and beneficent purposes should be so ignobly prostituted.  He was invited here, and advertised, with his own consent, to speak on political topics only, and it was supposed that he was gentlemanly enough to adhere to the contract.  So far as the lecturer was concerned, no one cared whether he was a Pagan, or belonged to any one of the innumerous denominations, or simply a “Nothingarian.”  …A highly intelligent audience embracing the cream of our city went to hear Train, as we did, with the expectation of listening to a prodigy on the platform, to have a good shake down laugh, but not the least idea of being forced to hear low abuse of the Christian religion, of our sacred Scriptures, etc.” Pattison noted that the American people lack enough amusements, so when Train arrived to give a lecture, it was worth ten times the cost.  As such, noted Pattison, these men are public benefactors. “In all other respects he exceeded our expectations…He can capture an audience the most completely of any man we ever saw…He is an unfathomable mystery…Now all his attacks upon the vices and follies of the day amount to nothing so long as he does so much to undermine the morals of society, and of true social order, to corrupt the youth.  If he is insane he is to be pitied; if sane he is profoundly and INTENSELY wicked.  He is an unsolved mystery at all events - immensely smart - possessing unmeasured talents for good and terrible power for evil.” Train left Ypsilanti and lost the election to Grant, and the nation was most likely the better for it.  According to Wikipedia, “He spent his final days on park benches in New York City’s Madison Square Park, handing out dimes and refusing to speak to anyone but children and animals.” He died in 1904. (James Mann is a volunteer in the YHS Archives, a local historian and author, and a regular contributor to the Gleanings.) Photo Captions: Photo 1: George Francis Train, an independent candidate for president in 1872, stopped in Ypsilanti to deliver a political speech.