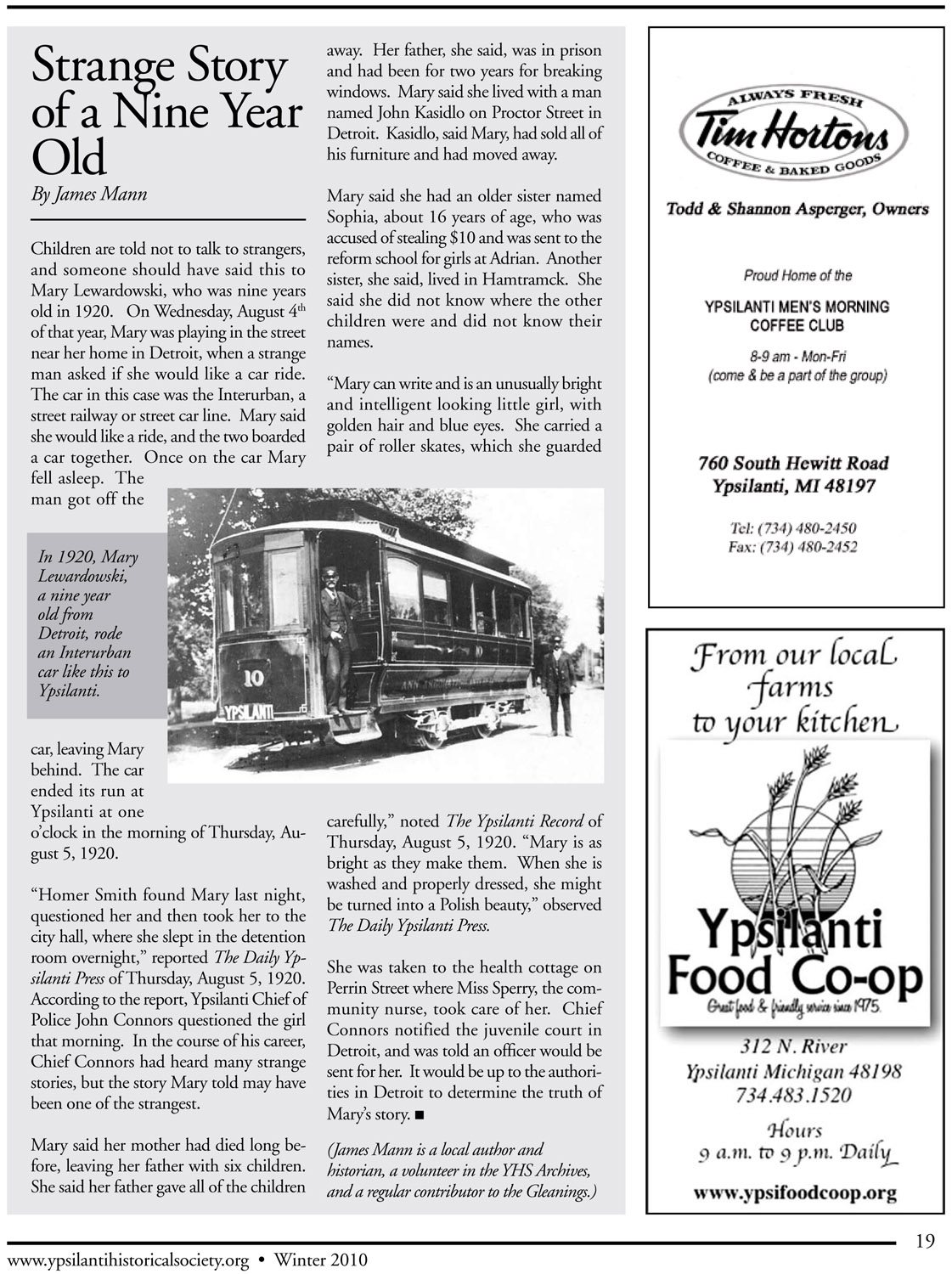 Children are told not to talk to strangers, and someone should have said this to Mary Lewardowski, who was nine years old in 1920.   On Wednesday, August 4th of that year, Mary was playing in the street near her home in Detroit, when a strange man asked if she would like a car ride.  The car in this case was the Interurban, a street railway or street car line.  Mary said she would like a ride, and the two boarded a car together.  Once on the car Mary fell asleep.  The man got off the car, leaving Mary behind.  The car ended its run at Ypsilanti at one o’clock in the morning of Thursday, August 5, 1920. “Homer Smith found Mary last night, questioned her and then took her to the city hall, where she slept in the detention room overnight,” reported The Daily Ypsilanti Press of Thursday, August 5, 1920. According to the report, Ypsilanti Chief of Police John Connors questioned the girl that morning.  In the course of his career, Chief Connors had heard many strange stories, but the story Mary told may have been one of the strangest. Mary said her mother had died long before, leaving her father with six children.  She said her father gave all of the children away.  Her father, she said, was in prison and had been for two years for breaking windows.  Mary said she lived with a man named John Kasidlo on Proctor Street in Detroit.  Kasidlo, said Mary, had sold all of his furniture and had moved away. Mary said she had an older sister named Sophia, about 16 years of age, who was accused of stealing $10 and was sent to the reform school for girls at Adrian.  Another sister, she said, lived in Hamtramck.  She said she did not know where the other children were and did not know their names. “Mary can write and is an unusually bright and intelligent looking little girl, with golden hair and blue eyes.  She carried a pair of roller skates, which she guarded carefully,” noted The Ypsilanti Record of Thursday, August 5, 1920. “Mary is as bright as they make them.  When she is washed and properly dressed, she might be turned into a Polish beauty,” observed The Daily Ypsilanti Press. She was taken to the health cottage on Perrin Street where Miss Sperry, the community nurse, took care of her.  Chief Connors notified the juvenile court in Detroit, and was told an officer would be sent for her.  It would be up to the authorities in Detroit to determine the truth of Mary’s story. (James Mann is a local author and historian, a volunteer in the YHS Archives, and a regular contributor to the Gleanings.) Photo Captions: Photo 1: In 1920, Mary Lewardowski, a nine year old from Detroit, rode an Interurban car like this to Ypsilanti.