And We Still Live! 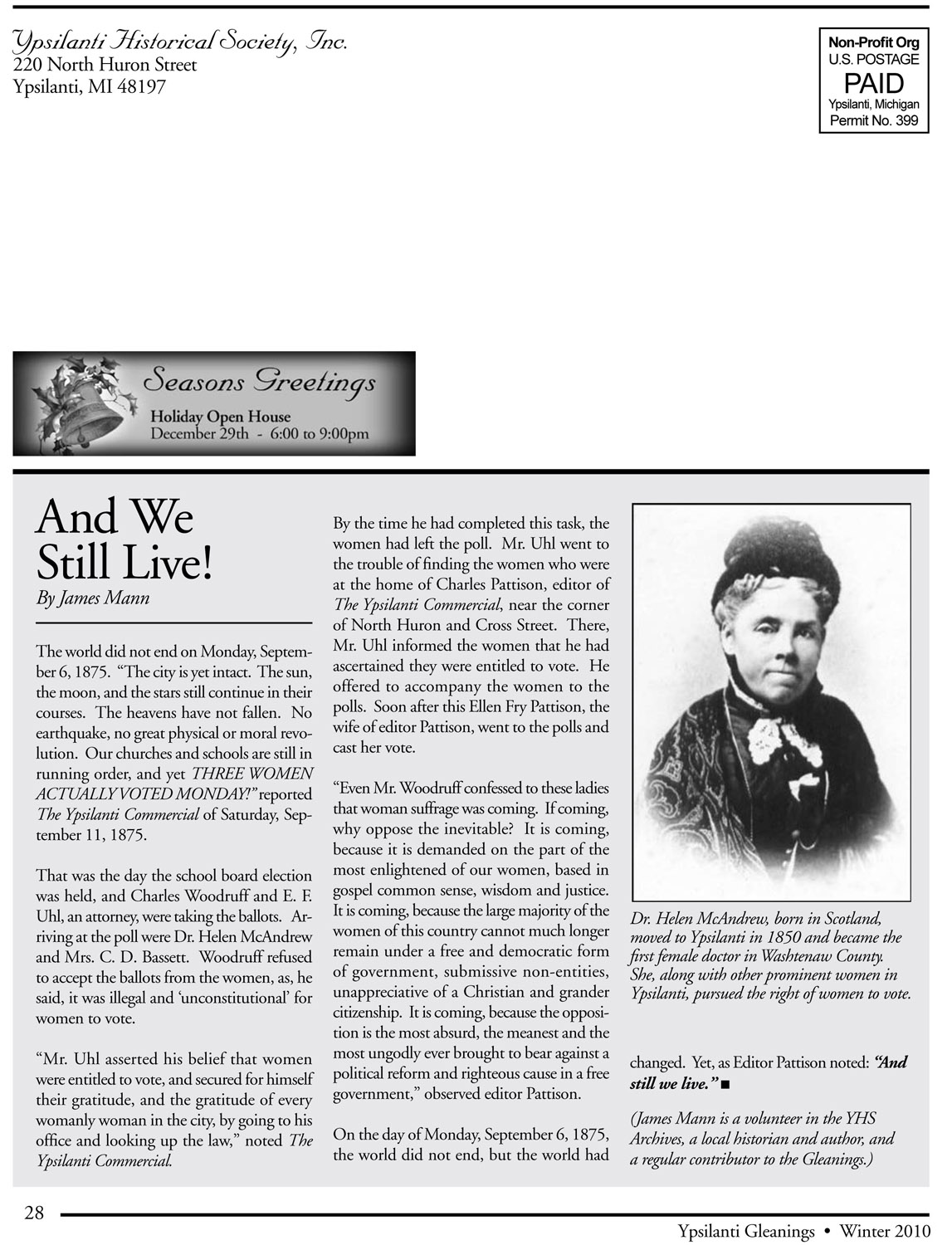 The world did not end on Monday, September 6, 1875.  “The city is yet intact.  The sun, the moon, and the stars still continue in their courses.  The heavens have not fallen.  No earthquake, no great physical or moral revolution.  Our churches and schools are still in running order, and yet THREE WOMEN ACTUALLY VOTED MONDAY!” reported The Ypsilanti Commercial of Saturday, September 11, 1875. That was the day the school board election was held, and Charles Woodruff and E. F. Uhl, an attorney, were taking the ballots.   Arriving at the poll were Dr. Helen McAndrew and Mrs. C. D. Bassett.  Woodruff refused to accept the ballots from the women, as, he said, it was illegal and ‘unconstitutional’ for women to vote. “Mr. Uhl asserted his belief that women were entitled to vote, and secured for himself their gratitude, and the gratitude of every womanly woman in the city, by going to his office and looking up the law,” noted The Ypsilanti Commercial. By the time he had completed this task, the women had left the poll.  Mr. Uhl went to the trouble of finding the women who were at the home of Charles Pattison, editor of The Ypsilanti Commercial, near the corner of North Huron and Cross Street.  There, Mr. Uhl informed the women that he had ascertained they were entitled to vote.  He offered to accompany the women to the polls.  Soon after this Ellen Fry Pattison, the wife of editor Pattison, went to the polls and cast her vote. “Even Mr. Woodruff confessed to these ladies that woman suffrage was coming.  If coming, why oppose the inevitable?  It is coming, because it is demanded on the part of the most enlightened of our women, based in gospel common sense, wisdom and justice.  It is coming, because the large majority of the women of this country cannot much longer remain under a free and democratic form of government, submissive non-entities, unappreciative of a Christian and grander citizenship.  It is coming, because the opposition is the most absurd, the meanest and the most ungodly ever brought to bear against a political reform and righteous cause in a free government,” observed editor Pattison. On the day of Monday, September 6, 1875, the world did not end, but the world had changed.  Yet, as Editor Pattison noted: “And still we live.” (James Mann is a volunteer in the YHS Archives, a local historian and author, and a regular contributor to the Gleanings.) Photo Captions: Photo 1: Dr. Helen McAndrew, born in Scotland, moved to Ypsilanti in 1850 and became the first female doctor in Washtenaw County.  She, along with other prominent women in Ypsilanti, pursued the right of women to vote.