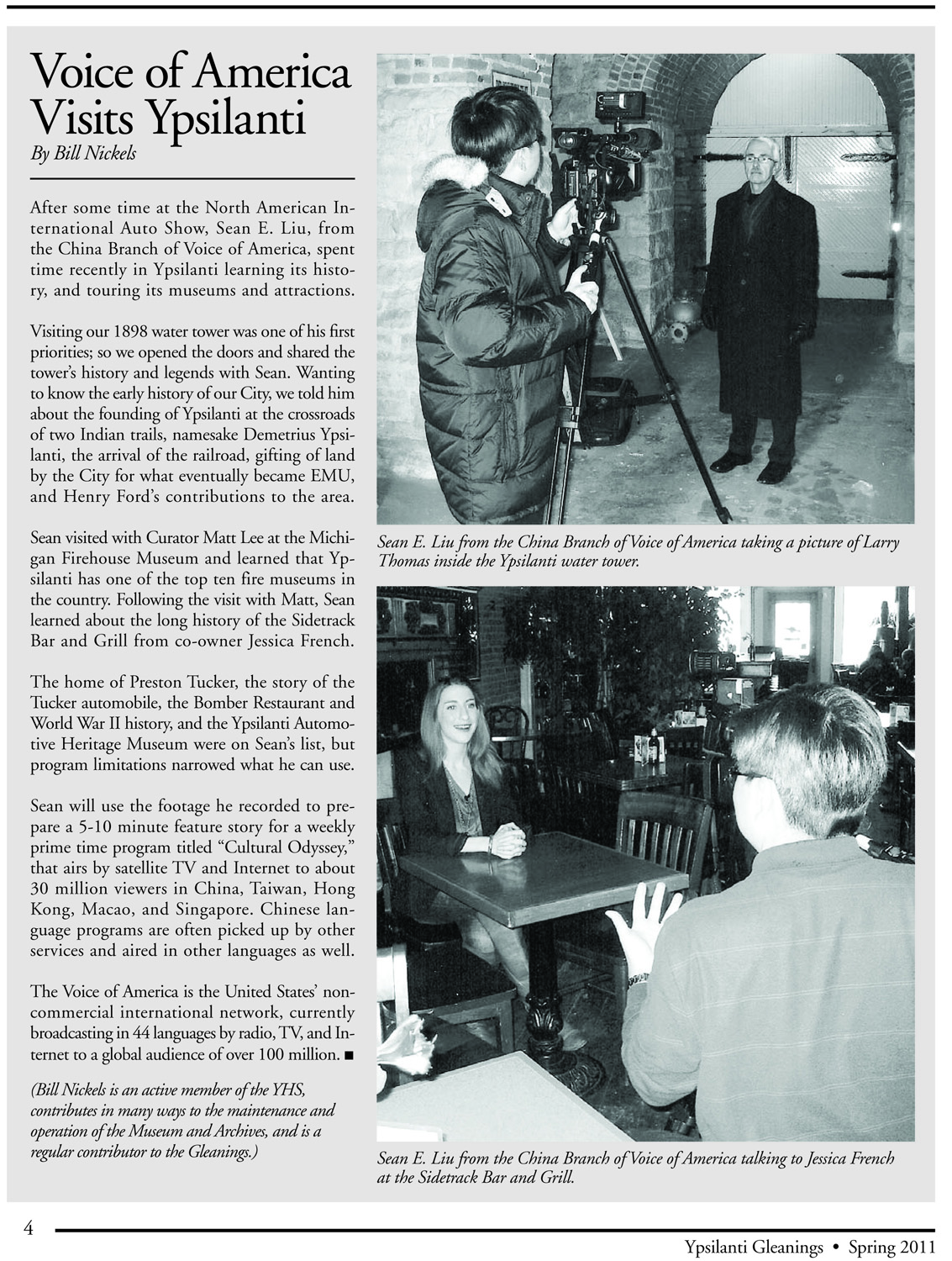 After some time at the North American International Auto Show, Sean E. Liu, from the China Branch of Voice of America, spent time recently in Ypsilanti learning its history, and touring its museums and attractions. Visiting our 1898 water tower was one of his first priorities; so we opened the doors and shared the tower's history and legends with Sean. Wanting to know the early history of our City, we told him about the founding of Ypsilanti at the crossroads of two Indian trails, namesake Demetrius Ypsilanti, the arrival of the railroad, gifting of land by the City for what eventually became EMU, and Henry Ford's contributions to the area. Sean visited with Curator Matt Lee at the Michigan Firehouse Museum and learned that Ypsilanti has one of the top ten fire museums in the country. Following the visit with Matt, Sean learned about the long history of the Sidetrack Bar and Grill from co-owner Jessica French. The home of Preston Tucker, the story of the Tucker automobile, the Bomber Restaurant and World War II history, and the Ypsilanti Automotive Heritage Museum were on Sean's list, but program limitations narrowed what he can use. Sean will use the footage he recorded to prepare a 5-10 minute feature story for a weekly prime time program titled "Cultural Odyssey," that airs by satellite TV and Internet to about 30 million viewers in China, Taiwan, Hong Kong, Macao, and Singapore. Chinese language programs are often picked up by other services and aired in other languages as well. The Voice of America is the United States’ non-commercial international network, currently broadcasting in 44 languages by radio, TV, and Internet to a global audience of over 100 million. (Bill Nickels is an active member of the YHS, contributes in many ways to the maintenance and operation of the Museum and Archives, and is a regular contributor to the Gleanings.) Photo Captions: Photo 1: Sean E. Liu from the China Branch of Voice of America taking a picture of Larry Thomas inside the Ypsilanti water tower.

Photo 2: Sean E. Liu from the China Branch of Voice of America talking to Jessica French at the Sidetrack Bar and Grill.