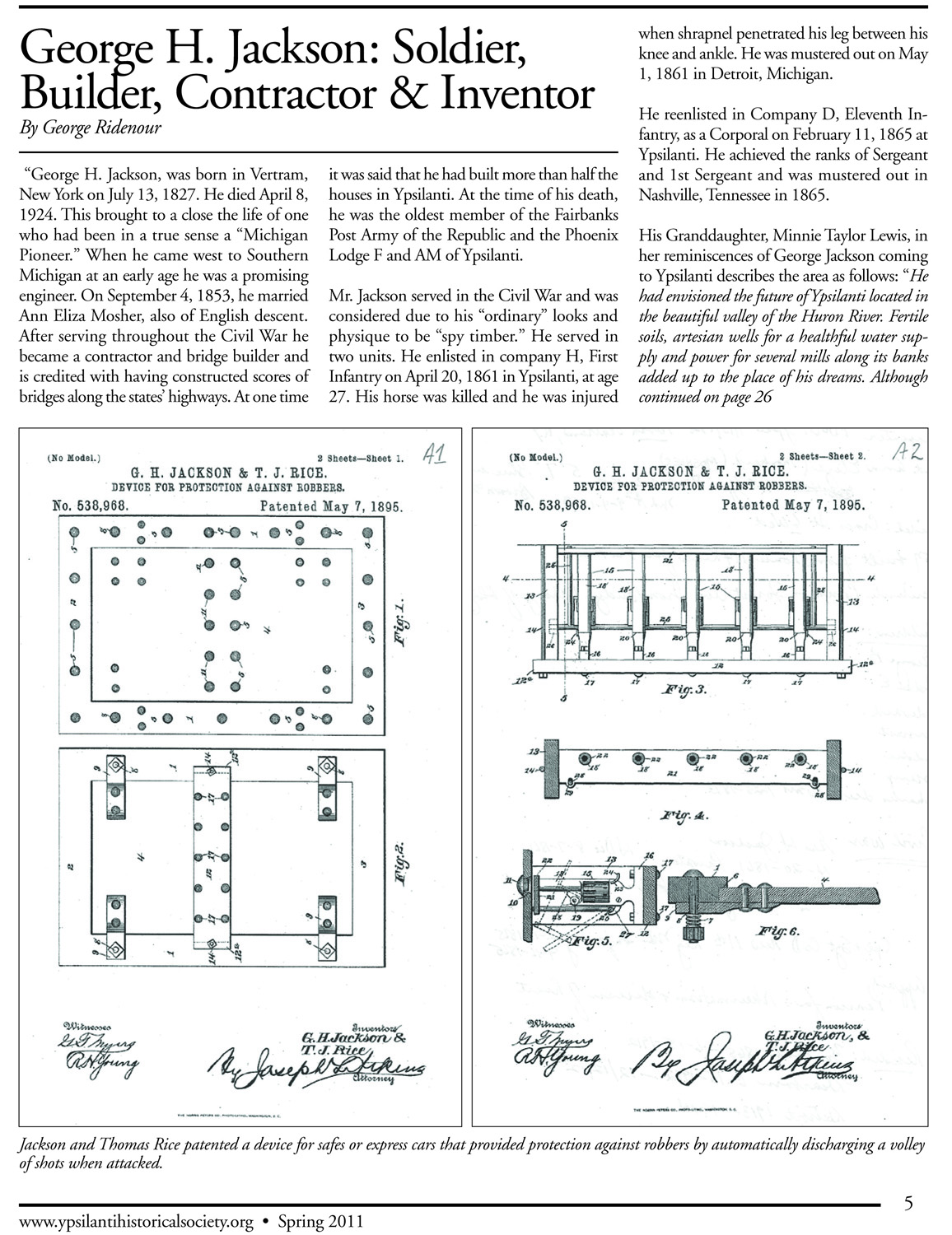 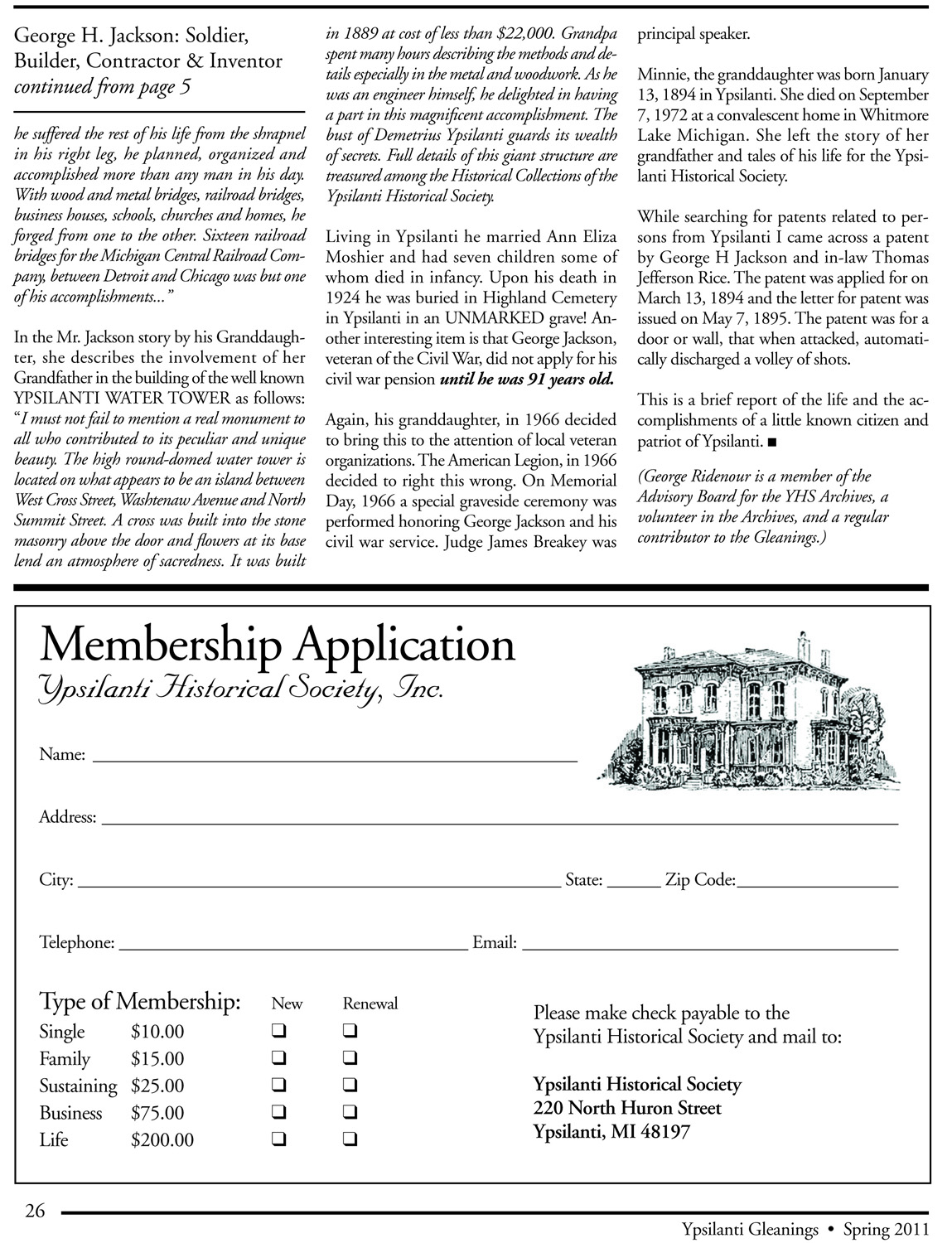 “George H. Jackson, was born in Vertram, New York on July 13, 1827. He died April 8, 1924. This brought to a close the life of one who had been in a true sense a “Michigan Pioneer.” When he came west to Southern Michigan at an early age he was a promising engineer. On September 4, 1853, he married Ann Eliza Mosher, also of English descent. After serving throughout the Civil War he became a contractor and bridge builder and is credited with having constructed scores of bridges along the states’ highways. At one time it was said that he had built more than half the houses in Ypsilanti. At the time of his death, he was the oldest member of the Fairbanks Post Army of the Republic and the Phoenix Lodge F and AM of Ypsilanti.

Mr. Jackson served in the Civil War and was considered due to his “ordinary” looks and physique to be “spy timber.” He served in two units. He enlisted in company H, First Infantry on April 20, 1861 in Ypsilanti, at age 27. His horse was killed and he was injured when shrapnel penetrated his leg between his knee and ankle. He was mustered out on May 1, 1861 in Detroit, Michigan.

He reenlisted in Company D, Eleventh Infantry, as a Corporal on February 11, 1865 at Ypsilanti. He achieved the ranks of Sergeant and 1st Sergeant and was mustered out in Nashville, Tennessee in 1865.

His Granddaughter, Minnie Taylor Lewis, in her reminiscences of George Jackson coming to Ypsilanti describes the area as follows: “He had envisioned the future of Ypsilanti located in the beautiful valley of the Huron River. Fertile soils, artesian wells for a healthful water supply and power for several mills along its banks added up to the place of his dreams. Although he suffered the rest of his life from the shrapnel in his right leg, he planned, organized and accomplished more than any man in his day. With wood and metal bridges, railroad bridges, business houses, schools, churches and homes, he forged from one to the other. Sixteen railroad bridges for the Michigan Central Railroad Company, between Detroit and Chicago was but one of his accomplishments...”

In the Mr. Jackson story by his Granddaughter, she describes the involvement of her Grandfather in the building of the well known YPSILANTI WATER TOWER ad follows: “I must not fail to mention a real monument to all who contributed to its peculiar and unique beauty. The high round-domed water tower is located on what appears to be an island between West Cross Street, Washtenaw Avenue and North Summit Street. A cross was built into the stone masonry above the door and flowers at its base lend an atmosphere of sacredness. It was built in 1889 at cost of less than $22,000. Grandpa spent many hours describing the methods and details especially in the metal and woodwork. As he was an engineer himself, he delighted in having a part in this magnificent accomplishment. The bust of Demetrius Ypsilanti guards its wealth of secrets. Full details of this giant structure are treasured among the Historical Collections of the Ypsilanti Historical Society.

Living in Ypsilanti he married Ann Eliza Moshier and had seven children some of whom died in infancy. Upon his death in 1924 he was buried in Highland Cemetery in Ypsilanti in an UNMARKED grave! Another interesting item is that George Jackson, veteran of the Civil War, did not apply for his civil war pension until he was 91 years old.

Again, his granddaughter, in 1966 decided to bring this to the attention of local veteran organizations. The American Legion, in 1966 decided to right this wrong. On Memorial Day, 1966 a special graveside ceremony was performed honoring George Jackson and his civil war service. Judge James Breakey was principal speaker.

Minnie, the granddaughter was born January 13, 1894 in Ypsilanti. She died on September 7, 1972 at a convalescent home in Whitmore Lake Michigan. She left the story of her grandfather and tales of his life for the Ypsilanti Historical Society.

While searching for patents related to persons from Ypsilanti I came across a patent by George H Jackson and in-law Thomas Jefferson Rice. The patent was applied for on March 13, 1894 and the letter for patent was issued on May 7, 1895. The patent was for a door or wall, that when attacked, automatically discharged a volley of shots.

This is a brief report of the life and the accomplishments of a little known citizen and patriot of Ypsilanti.

(George Ridenour is a member of the Advisory Board for the YHS Archives, a volunteer in the Archives, and a regular contributor to the Gleanings.)

Photo 1 &
Photo 2: Jackson and Thomas Rice patented a device for safes or express cars that provided protection against robbers by automatically discharging a volley of shots when attacked.