For the Sake of Progress 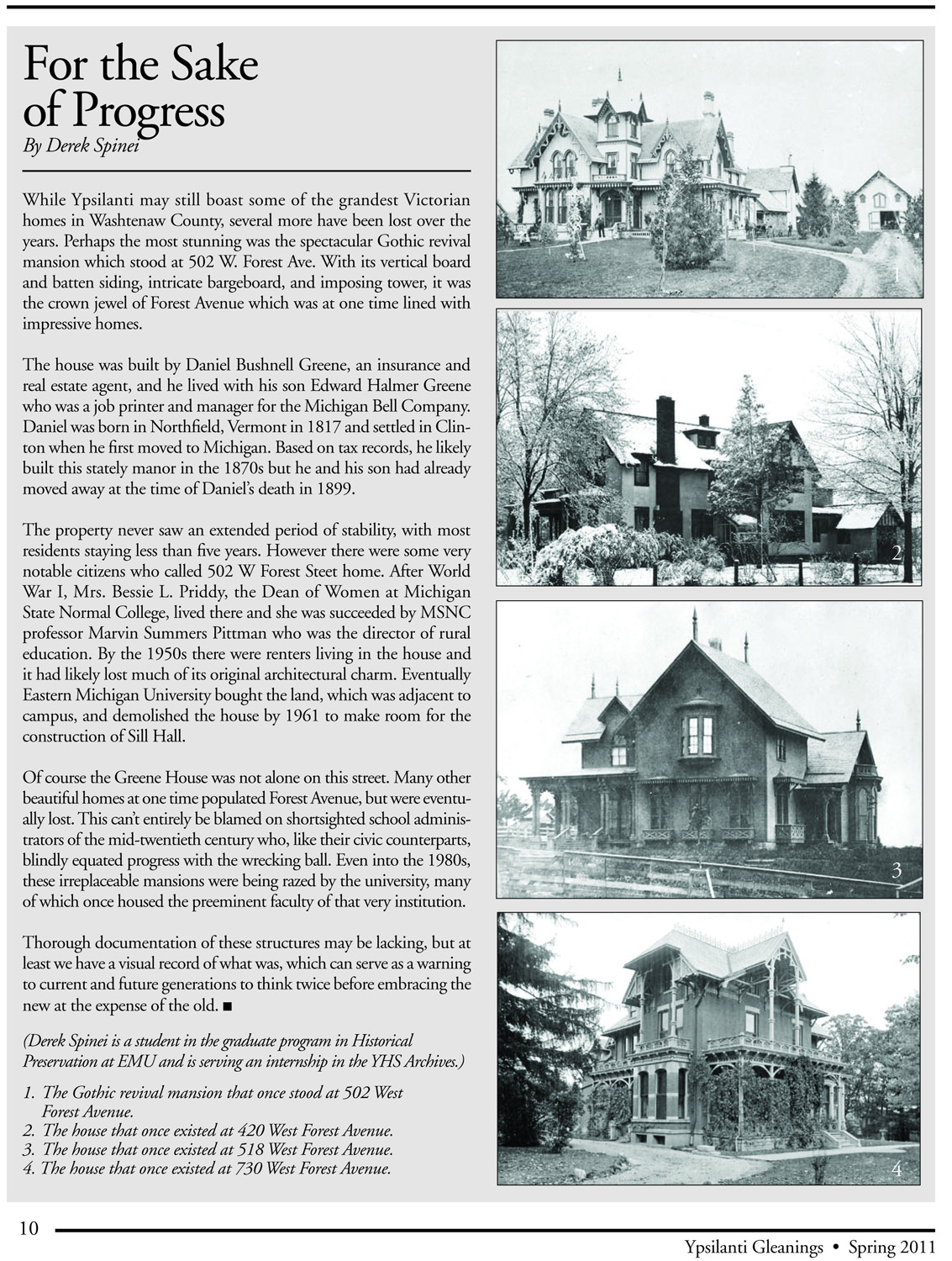 While Ypsilanti may still boast some of the grandest Victorian homes in Washtenaw County, several more have been lost over the years. Perhaps the most stunning was the spectacular Gothic revival mansion which stood at 502 W. Forest Ave. With its vertical board and batten siding, intricate bargeboard, and imposing tower, it was the crown jewel of Forest Avenue which was at one time lined with impressive homes. The house was built by Daniel Bushnell Greene, an insurance and real estate agent, and he lived with his son Edward Halmer Greene who was a job printer and manager for the Michigan Bell Company. Daniel was born in Northfield, Vermont in 1817 and settled in Clinton when he first moved to Michigan. Based on tax records, he likely built this stately manor in the 1870s but he and his son had already moved away at the time of Daniel’s death in 1899. The property never saw an extended period of stability, with most residents staying less than five years. However there were some very notable citizens who called 502 W Forest Steet home. After World War I, Mrs. Bessie L. Priddy, the Dean of Women at Michigan State Normal College, lived there and she was succeeded by MSNC professor Marvin Summers Pittman who was the director of rural education. By the 1950s there were renters living in the house and it had likely lost much of its original architectural charm. Eventually Eastern Michigan University bought the land, which was adjacent to campus, and demolished the house by 1961 to make room for the construction of Sill Hall. Of course the Greene House was not alone on this street. Many other beautiful homes at one time populated Forest Avenue, but were eventually lost. This can’t entirely be blamed on shortsighted school administrators of the mid-twentieth century who, like their civic counterparts, blindly equated progress with the wrecking ball. Even into the 1980s, these irreplaceable mansions were being razed by the university, many of which once housed the preeminent faculty of that very institution. Thorough documentation of these structures may be lacking, but at least we have a visual record of what was, which can serve as a warning to current and future generations to think twice before embracing the new at the expense of the old. (Derek Spinei is a student in the graduate program in Historical Preservation at EMU and is serving an internship in the YHS Archives.) Photo Captions: Photo 1: The Gothic revival mansion that once stood at 502 West Forest Avenue.
Photo 2: The house that once existed at 420 West Forest Avenue.
Photo 3: The house that once existed at 518 West Forest Avenue.
Photo 4: The house that once existed at 730 West Forest Avenue.