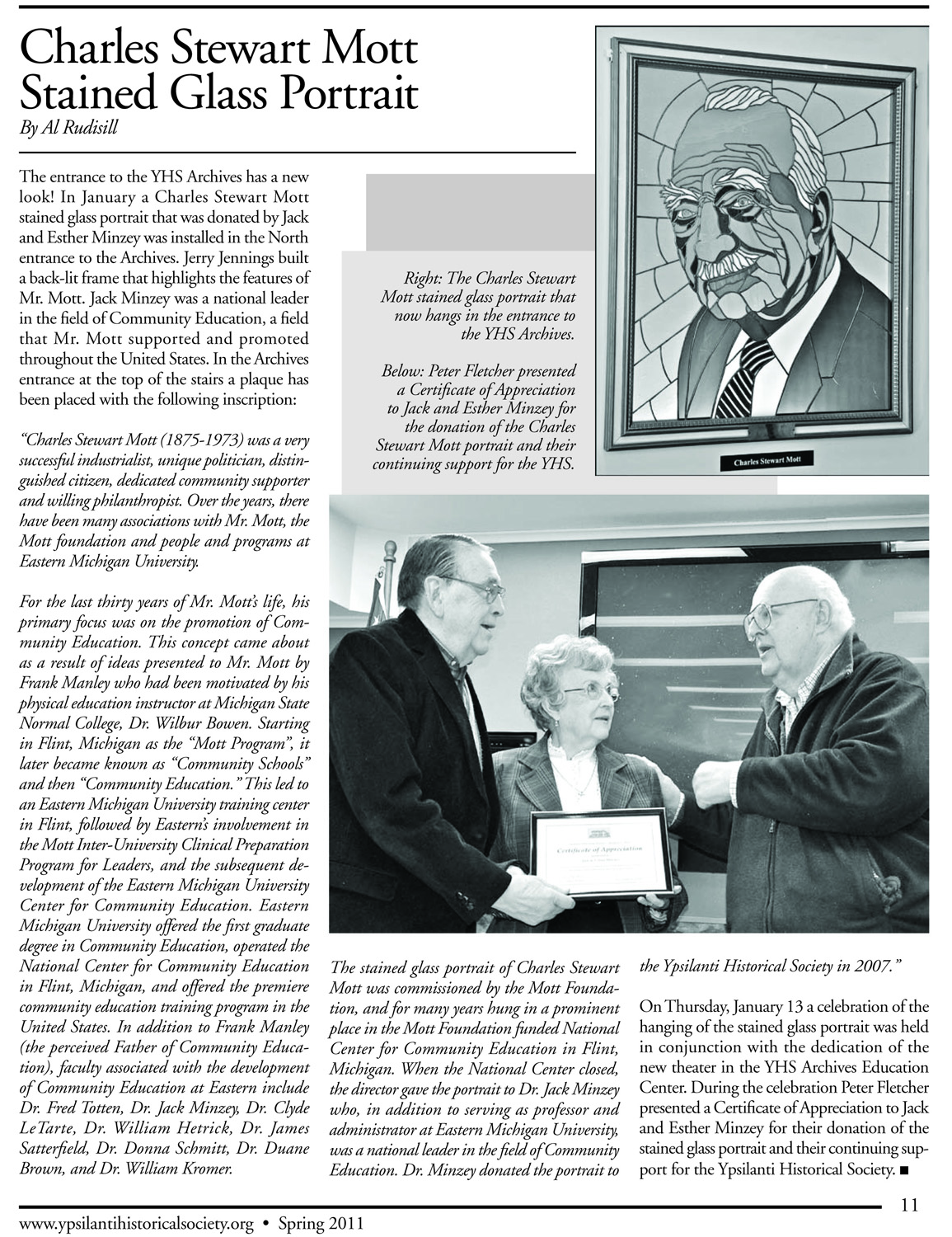 The entrance to the YHS Archives has a new look! In January a Charles Stewart Mott stained glass portrait that was donated by Jack and Esther Minzey was installed in the North entrance to the Archives. Jerry Jennings built a back-lit frame that highlights the features of Mr. Mott. Jack Minzey was a national leader in the field of Community Education, a field that Mr. Mott supported and promoted throughout the United States. In the Archives entrance at the top of the stairs a plaque has been placed with the following inscription: “Charles Stewart Mott (1875-1973) was a very successful industrialist, unique politician, distinguished citizen, dedicated community supporter and willing philanthropist. Over the years, there have been many associations with Mr. Mott, the Mott foundation and people and programs at Eastern Michigan University. For the last thirty years of Mr. Mott’s life, his primary focus was on the promotion of Community Education. This concept came about as a result of ideas presented to Mr. Mott by Frank Manley who had been motivated by his physical education instructor at Michigan State Normal College, Dr. Wilbur Bowen. Starting in Flint, Michigan as the “Mott Program”, it later became known as “Community Schools” and then “Community Education.” This led to an Eastern Michigan University training center in Flint, followed by Eastern’s involvement in the Mott Inter-University Clinical Preparation Program for Leaders, and the subsequent development of the Eastern Michigan University Center for Community Education. Eastern Michigan University offered the first graduate degree in Community Education, operated the National Center for Community Education in Flint, Michigan, and offered the premiere community education training program in the United States. In addition to Frank Manley (the perceived Father of Community Education), faculty associated with the development of Community Education at Eastern include Dr. Fred Totten, Dr. Jack Minzey, Dr. Clyde LeTarte, Dr. William Hetrick, Dr. James Satterfield, Dr. Donna Schmitt, Dr. Duane Brown, and Dr. William Kromer. The stained glass portrait of Charles Stewart Mott was commissioned by the Mott Foundation, and for many years hung in a prominent place in the Mott Foundation funded National Center for Community Education in Flint, Michigan. When the National Center closed, the director gave the portrait to Dr. Jack Minzey who, in addition to serving as professor and administrator at Eastern Michigan University, was a national leader in the field of Community Education. Dr. Minzey donated the portrait to the Ypsilanti Historical Society in 2007.” On Thursday, January 13 a celebration of the hanging of the stained glass window was held in conjunction with the dedication of the new theater in the YHS Archives Education Center. During the celebration Peter Fletcher presented a Certificate of Appreciation to Jack and Esther Minzey for their donation of the stained glass portrait and their continuing support for the Ypsilanti Historical Society.

Photo Captions: Photo 1: The Charles Stewart Mott stained glass portrait that now hangs in the entrance to the YHS Archives.

Photo 2: Peter Fletcher presented a Certificate of Appreciation to Jack and Esther Minzey for the donation of the Charles Stewart Mott portrait and their continuing support for the YHS.