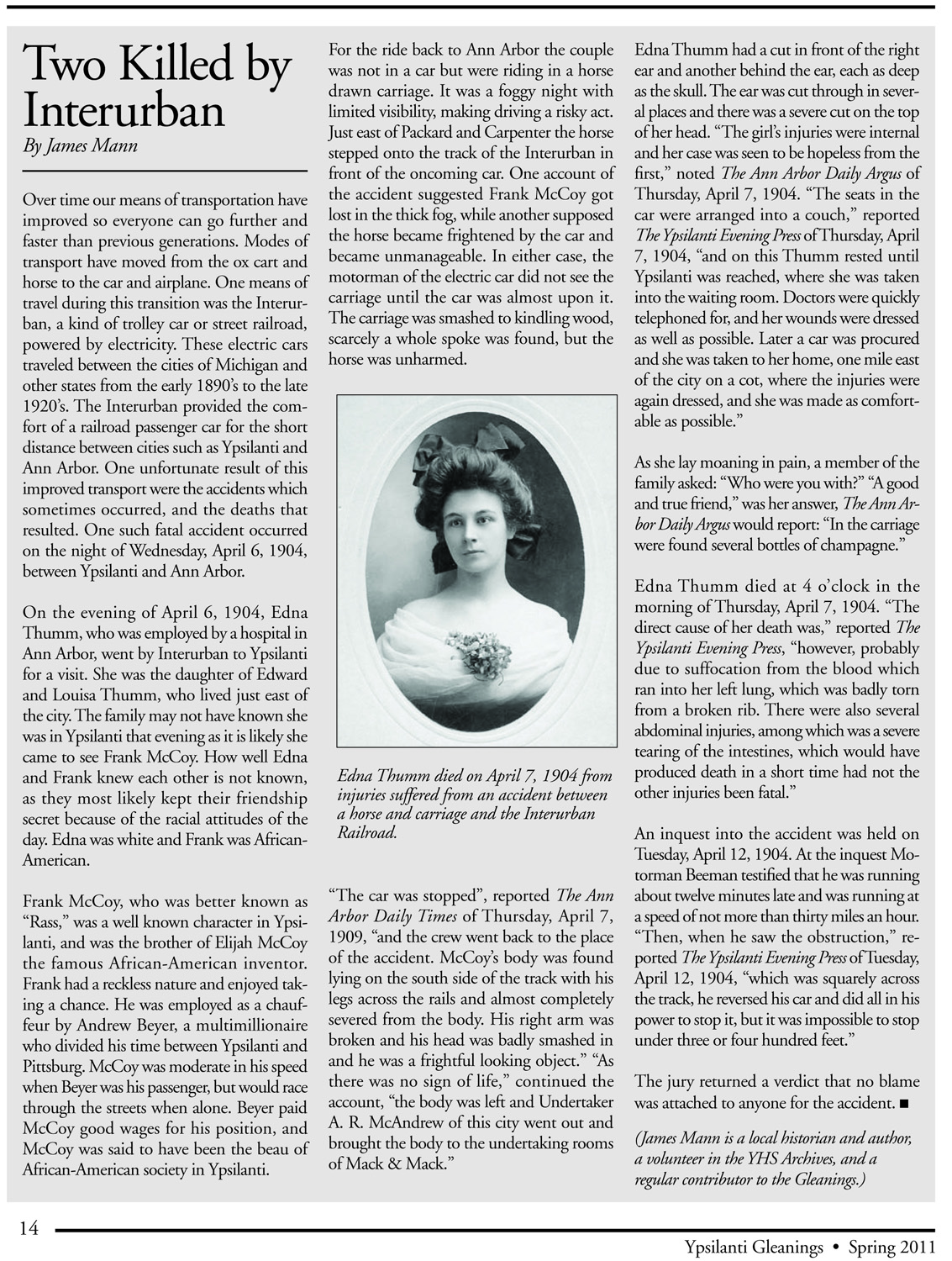 Over time our means of transportation have improved so everyone can go further and faster than previous generations. Modes of transport have moved from the ox cart and horse to the car and airplane. One means of travel during this transition was the Interurban, a kind of trolley car or street railroad, powered by electricity. These electric cars traveled between the cities of Michigan and other states from the early 1890’s to the late 1920’s. The Interurban provided the comfort of a railroad passenger car for the short distance between cities such as Ypsilanti and Ann Arbor. One unfortunate result of this improved transport were the accidents which sometimes occurred, and the deaths that resulted. One such fatal accident occurred on the night of Wednesday, April 6, 1904, between Ypsilanti and Ann Arbor. On the evening of April 6, 1904, Edna Thumm, who was employed by a hospital in Ann Arbor, went by Interurban to Ypsilanti for a visit. She was the daughter of Edward and Louisa Thumm, who lived just east of the city. The family may not have known she was in Ypsilanti that evening as it is likely she came to see Frank McCoy. How well Edna and Frank knew each other is not known, as they most likely kept their friendship secret because of the racial attitudes of the day. Edna was white and Frank was African-American. Frank McCoy, who was better known as “Rass,” was a well known character in Ypsilanti, and was the brother of Elijah McCoy the famous African-American inventor. Frank had a reckless nature and enjoyed taking a chance. He was employed as a chauffeur by Andrew Beyer, a multimillionaire who divided his time between Ypsilanti and Pittsburg. McCoy was moderate in his speed when Beyer was his passenger, but would race through the streets when alone. Beyer paid McCoy good wages for his position, and McCoy was said to have been the beau of African-American society in Ypsilanti. For the ride back to Ann Arbor the couple was not in a car but were riding in a horse drawn carriage. It was a foggy night with limited visibility, making driving a risky act. Just east of Packard and Carpenter the horse stepped onto the track of the Interurban in front of the oncoming car. One account of the accident suggested Frank McCoy got lost in the thick fog, while another supposed the horse became frightened by the car and became unmanageable. In either case, the motorman of the electric car did not see the carriage until the car was almost upon it. The carriage was smashed to kindling wood, scarcely a whole spoke was found, but the horse was unharmed. “The car was stopped”, reported The Ann Arbor Daily Times of Thursday, April 7, 1909, “and the crew went back to the place of the accident. McCoy’s body was found lying on the south side of the track with his legs across the rails and almost completely severed from the body. His right arm was broken and his head was badly smashed in and he was a frightful looking object.” “As there was no sign of life,” continued the account, “the body was left and Undertaker A. R. McAndrew of this city went out and brought the body to the undertaking rooms of Mack & Mack.” Edna Thumm had a cut in front of the right ear and another behind the ear, each as deep as the skull. The ear was cut through in several places and there was a severe cut on the top of her head. “The girl’s injuries were internal and her case was seen to be hopeless from the first,” noted The Ann Arbor Daily Argus of Thursday, April 7, 1904. “The seats in the car were arranged into a couch,” reported The Ypsilanti Evening Press of Thursday, April 7, 1904, “and on this Thumm rested until Ypsilanti was reached, where she was taken into the waiting room. Doctors were quickly telephoned for, and her wounds were dressed as well as possible. Later a car was procured and she was taken to her home, one mile east of the city on a cot, where the injuries were again dressed, and she was made as comfortable as possible.” As she lay moaning in pain, a member of the family asked: “Who were you with?” “A good and true friend,” was her answer, The Ann Arbor Daily Argus would report: “In the carriage were found several bottles of champagne.” Edna Thumm died at 4 o’clock in the morning of Thursday, April 7, 1904. “The direct cause of her death was,” reported The Ypsilanti Evening Press, “however, probably due to suffocation from the blood which ran into her left lung, which was badly torn from a broken rib. There were also several abdominal injuries, among which was a severe tearing of the intestines, which would have produced death in a short time had not the other injuries been fatal.” An inquest into the accident was held on Tuesday, April 12, 1904. At the inquest Motorman Beeman testified that he was running about twelve minutes late and was running at a speed of not more than thirty miles an hour. “Then, when he saw the obstruction,” reported The Ypsilanti Evening Press of Tuesday, April 12, 1904, “which was squarely across the track, he reversed his car and did all in his power to stop it, but it was impossible to stop under three or four hundred feet.” The jury returned a verdict that no blame was attached to anyone for the accident. (James Mann is a local historian and author, a volunteer in the YHS Archives, and a regular contributor to the Gleanings.) Photo Captions: Photo 1: Edna Thumm died on April 7, 1904 from injuries suffered from an accident between a horse and carriage and the Interurban Railroad.