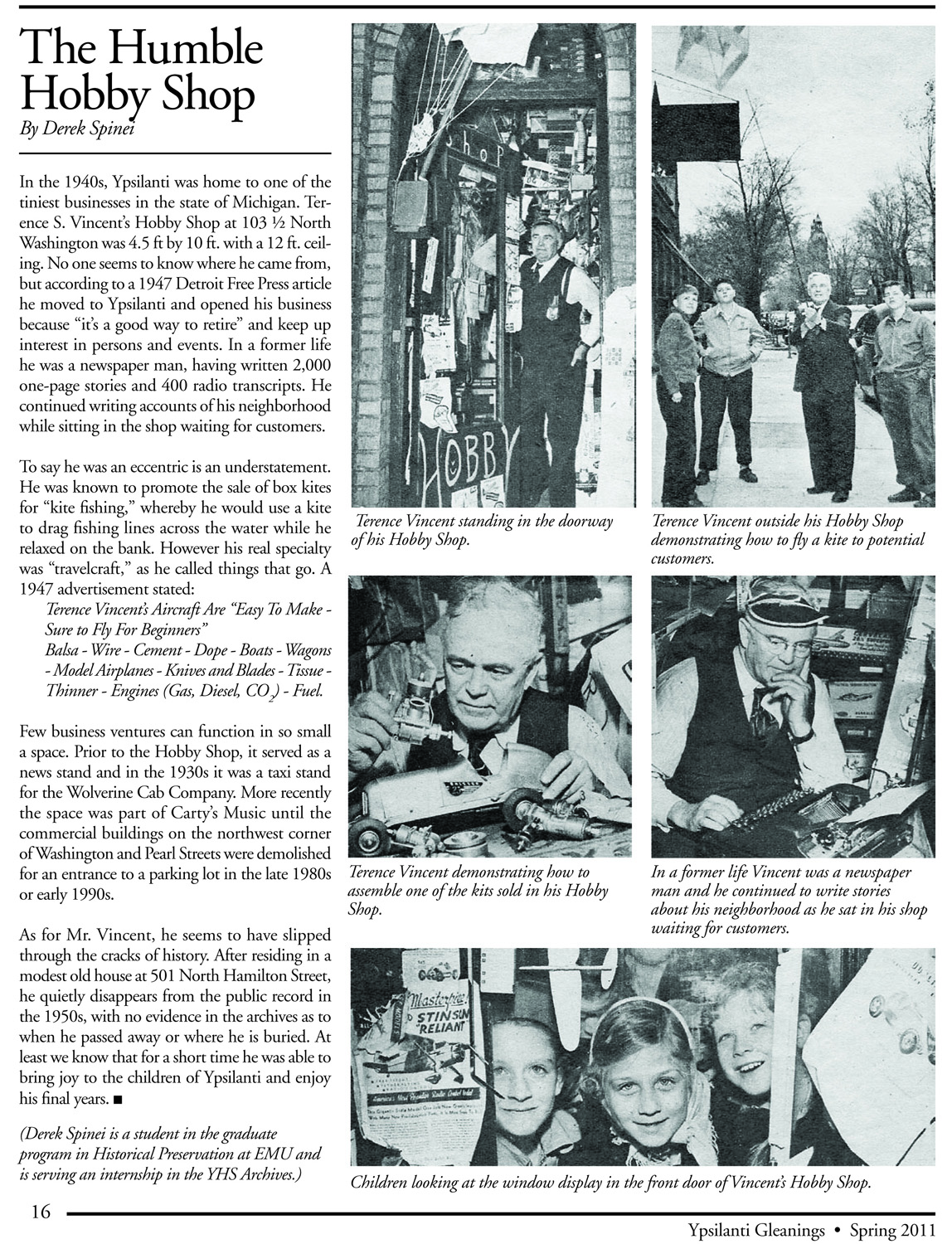 In the 1940s, Ypsilanti was home to one of the tiniest businesses in the state of Michigan. Terence S. Vincent’s hobby shop at 103 ½ North Washington was 4.5 ft by 10 ft. with a 12 ft. ceiling. No one seems to know where he came from, but according to a 1947 Detroit Free Press article he moved to Ypsilanti and opened his business because “it’s a good way to retire” and keep up interest in persons and events. In a former life he was a newspaper man, having written 2,000 one-page stories and 400 radio transcripts. He continued writing accounts of his neighborhood while sitting in the shop waiting for customers. To say he was an eccentric is an understatement. He was known to promote the sale of box kites for “kite fishing,” whereby he would use a kite to drag fishing lines across the water while he relaxed on the bank. However his real specialty was “travelcraft,” as he called things that go. A 1947 advertisement stated: Terence Vincent’s Aircraft Are “Easy To Make - Sure to Fly For Beginners” Balsa - Wire - Cement - Dope - Boats - Wagons - Model Airplanes - Knives and Blades - Tissue - Thinner - Engines (Gas, Diesel, CO2) - Fuel. Few business ventures can function in so small a space. Prior to the hobby shop, it served as a news stand and in the 1930s it was a taxi stand for the Wolverine Cab Company. More recently the space was part of Carty’s Music until the commercial buildings on the northwest corner of Washington and Pearl Streets were demolished for an entrance to a parking lot in the late 1980s or early 1990s. As for Mr. Vincent, he seems to have slipped through the cracks of history. After residing in a modest old house at 501 North Hamilton Street, he quietly disappears from the public record in the 1950s, with no evidence in the archives as to when he passed away or where he is buried. At least we know that for a short time he was able to bring joy to the children of Ypsilanti and enjoy his final years. (Derek Spinei is a student in the graduate program in Historical Preservation at EMU and is serving an internship in the YHS Archives.) Photo Captions:
Photo 1: Terence Vincent standing in the doorway of his hobby shop.

Photo 2: Terence Vincent outside his hobby shop demonstrating how to fly a kite to potential customers.

Photo 3: Terence Vincent demonstrating how to assemble one of the kits sold in his hobby shop.
Photo 4: In a former life Vincent was a newspaper man and he continued to write stories about his neighborhood as he sat in his shop waiting for customers.

Photo 5: Children looking at the window display in the front door of Vincent’s hobby shop.