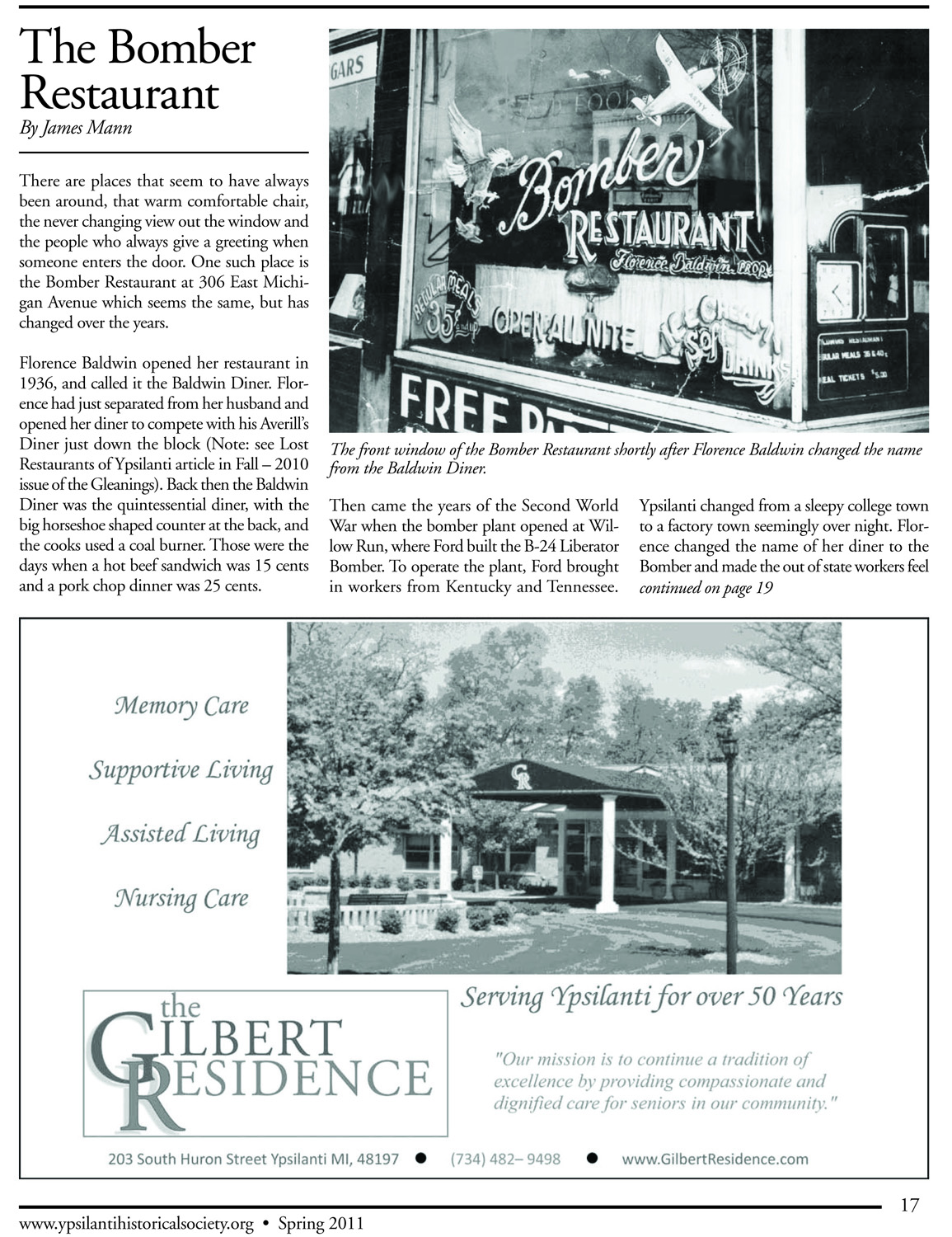 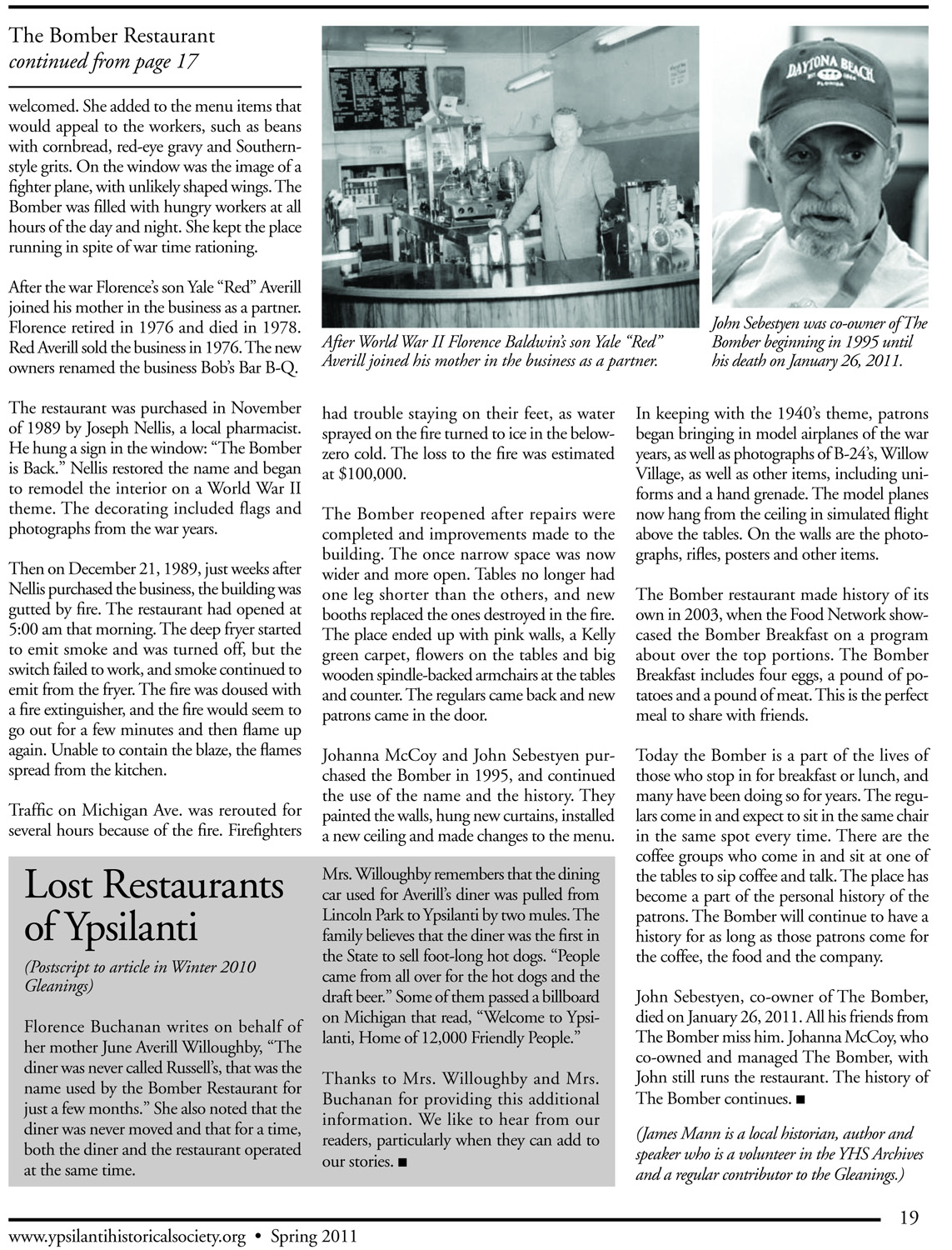 There are places that seem to have always been around, that warm comfortable chair, the never changing view out the window and the people who always give a greeting when someone enters the door. One such place is the Bomber Restaurant at 306 East Michigan Avenue which seems the same, but has changed over the years. Florence Baldwin opened her restaurant in 1936, and called it the Baldwin Diner. Florence had just separated from her husband and opened her diner to compete with his Averill’s Diner just down the block (Note: see Lost Restaurants of Ypsilanti article in Fall – 2010 issue of the Gleanings). Back then the Baldwin Diner was the quintessential diner, with the big horseshoe shaped counter at the back, and the cooks used a coal burner. Those were the days when a hot beef sandwich was 15 cents and a pork chop dinner was 25 cents. Then came the years of the Second World War when the bomber plant opened at Willow Run, where Ford built the B-24 Liberator Bomber. To operate the plant, Ford brought in workers from Kentucky and Tennessee. Ypsilanti changed from a sleepy college town to a factory town seemingly over night. Florence changed the name of her diner to the Bomber and made the out of state workers feel welcomed. She added to the menu items that would appeal to the workers, such as beans with cornbread, red-eye gravy and Southern-style grits. On the window was the image of a fighter plane, with unlikely shaped wings. The Bomber was filled with hungry workers at all hours of the day and night. She kept the place running in spite of war time rationing. After the war Florence’s son Yale “Red” Averill joined his mother in the business as a partner. Florence retired in 1976 and died in 1978. Red Averill sold the business in 1976. The new owners renamed the business Bob’s Bar B-Q. The restaurant was purchased in November of 1989 by Joseph Nellis, a local pharmacist. He hung a sign in the window: “The Bomber is Back.” Nellis restored the name and began to remodel the interior on a World War II theme. The decorating included flags and photographs from the war years. Then on December 21, 1989, just weeks after Nellis purchased the business, the building was gutted by fire. The restaurant had opened at 5:00 am that morning. The deep fryer started to emit smoke and was turned off, but the switch failed to work, and smoke continued to emit from the fryer. The fire was doused with a fire extinguisher, and the fire would seem to go out for a few minutes and then flame up again. Unable to contain the blaze, the flames spread from the kitchen. Traffic on Michigan Ave. was rerouted for several hours because of the fire. Firefighters had trouble staying on their feet, as water sprayed on the fire turned to ice in the below-zero cold. The loss to the fire was estimated at $100,000. The Bomber reopened after repairs were completed and improvements made to the building. The once narrow space was now wider and more open. Tables no longer had one leg shorter than the others, and new booths replaced the ones destroyed in the fire. The place ended up with pink walls, a Kelly green carpet, flowers on the tables and big wooden spindle-backed armchairs at the tables and counter. The regulars came back and new patrons came in the door. Johanna McCoy and John Sebestyen purchased the Bomber in 1995, and continued the use of the name and the history. They painted the walls, hung new curtains, installed a new ceiling and made changes to the menu. In keeping with the 1940’s theme, patrons began bringing in model airplanes of the war years, as well as photographs of B-24’s, Willow Village, as well as other items, including uniforms and a hand grenade. The model planes now hang from the ceiling in simulated flight above the tables. On the walls are the photographs, rifles, posters and other items. The Bomber restaurant made history of its own in 2003, when the Food Network showcased the Bomber Breakfast on a program about over the top portions. The Bomber Breakfast includes four eggs, a pound of potatoes and a pound of meat. This is the perfect meal to share with friends. Today the Bomber is a part of the lives of those who stop in for breakfast or lunch, and many have been doing so for years. The regulars come in and expect to sit in the same chair in the same spot every time. There are the coffee groups who come in and sit at one of the tables to sip coffee and talk. The place has become a part of the personal history of the patrons. The Bomber will continue to have a history for as long as those patrons come for the coffee, the food and the company. John Sebestyen, co-owner of The Bomber, died on January 26, 2011. All his friends from The Bomber miss him. Johanna McCoy, who co-owned and managed The Bomber, with John still runs the restaurant. The history of The Bomber continues. (James Mann is a local historian, author and speaker who is a volunteer in the YHS Archives and a regular contributor to the Gleanings.) Photo Captions: Photo 1: The front window of the Bomber Restaurant shortly after Florence Baldwin changed the name from the Baldwin Diner.

Photo 2: After World War II Florence Baldwin’s son Yale “Red” Averill joined his mother in the business as a partner.