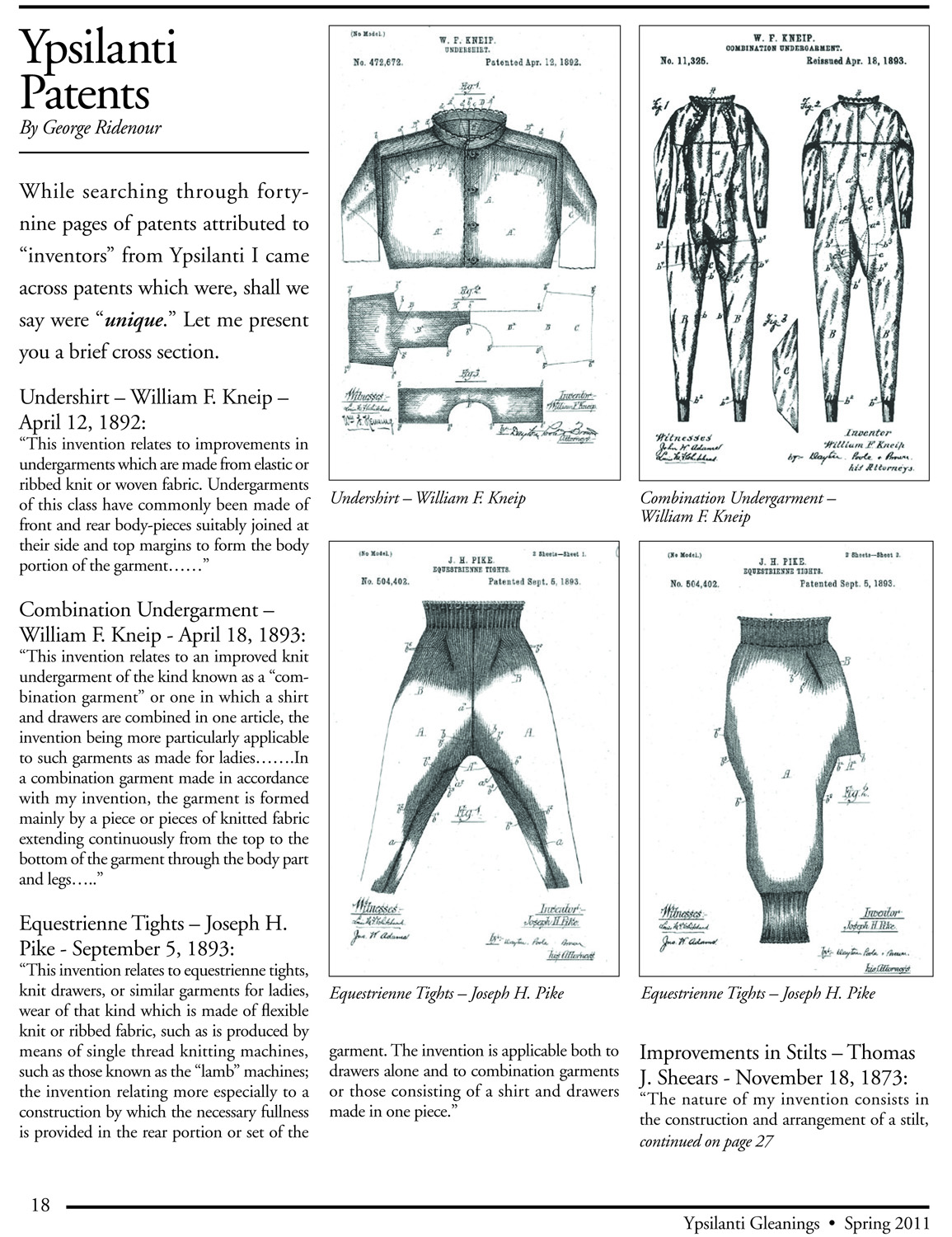 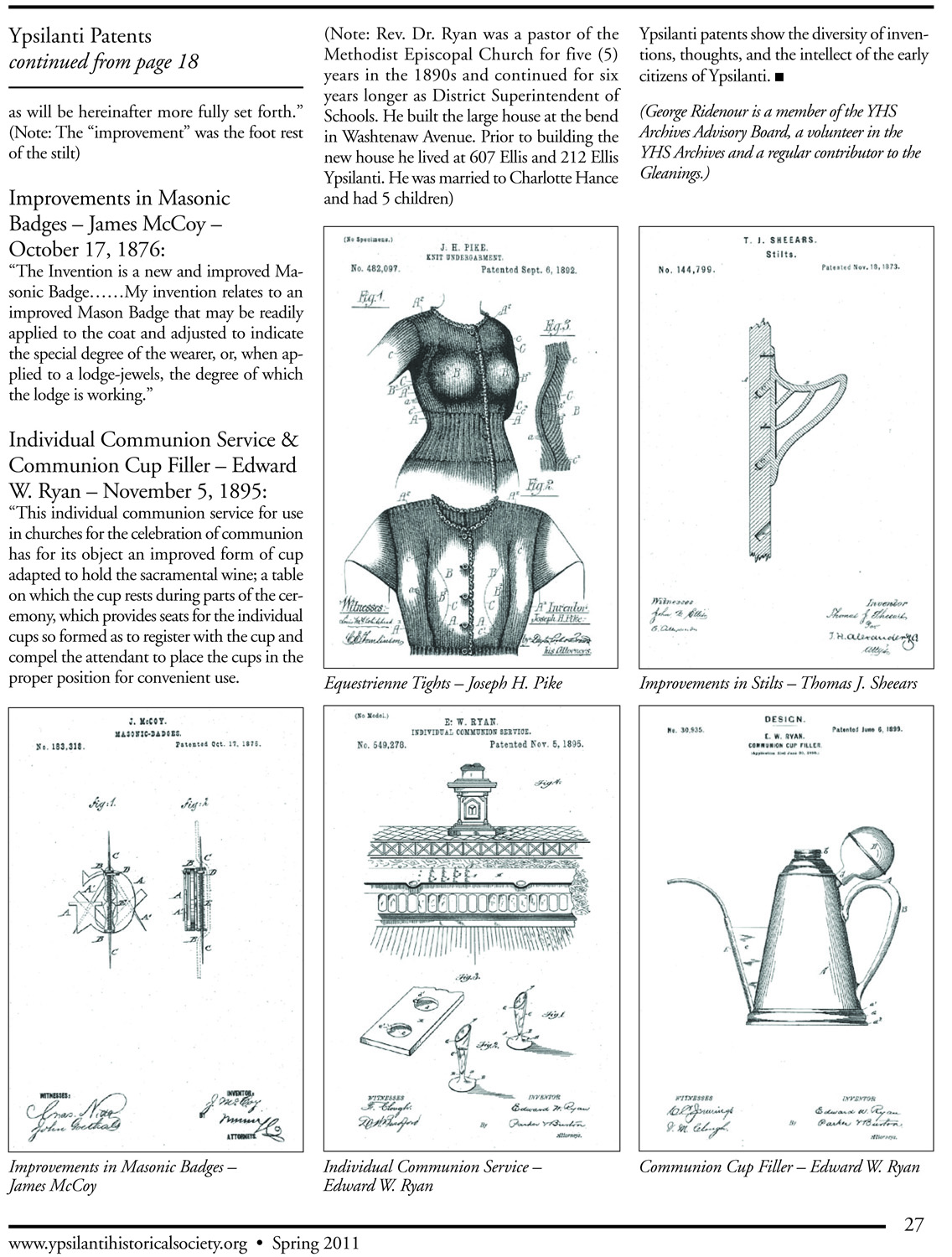 While searching through forty-nine pages of patents attributed to “inventors” from Ypsilanti I came across patents which were, shall we say were “unique.” Let me present you a brief cross section.

Undershirt – William F. Kneip – April 12, 1892: “This invention relates to improvements in undergarments which are made from elastic or ribbed knit or woven fabric. Undergarments of this class have commonly been made of front and rear body-pieces suitably joined at their side and top margins to form the body portion of the garment……” (See Photo 1)

Combination Undergarment – William F. Kneip - April 18, 1893: “This invention relates to an improved knit undergarment of the kind known as a “combination garment” or one in which a shirt and drawers are combined in one article, the invention being more particularly applicable to such garments as made for ladies…….In a combination garment made in accordance with my invention, the garment is formed mainly by a piece or pieces of knitted fabric extending continuously from the top to the bottom of the garment through the body part and legs…..” (See Photo 2)

Equestrienne Tights – Joseph H. Pike - September 5, 1893: “This invention relates to equestrienne tights, knit drawers, or similar garments for ladies, wear of that kind which is made of flexible knit or ribbed fabric, such as is produced by means of single thread knitting machines, such as those known as the “lamb” machines; the invention relating more especially to a construction by which the necessary fullness is provided in the rear portion or set of the garment. The invention is applicable both to drawers alone and to combination garments or those consisting of a shirt and drawers made in one piece.” (See Photo 3, Photo 4 & Photo 5)

Improvements in Stilts – Thomas J. Sheears - November 18, 1873: “The nature of my invention consists in the construction and arrangement of a stilt, as will be hereinafter more fully set forth.” (Note: The “improvement” was the foot rest of the stilt - see drawing 6)

Improvements in Masonic Badges – James McCoy – October 17, 1876: “The Invention is a new and improved Masonic Badge……My invention relates to an improved Mason Badge that may be readily applied to the coat and adjusted to indicate the special degree of the wearer, or, when applied to a lodge-jewels, the degree of which the lodge is working.” (See Photo 7)

Individual Communion Service & Communion Cup Filler – Edward W. Ryan – November 5, 1895: “This individual communion service for use in churches for the celebration of communion has for its object an improved form of cup adapted to hold the sacramental wine; a table on which the cup rests during parts of the ceremony, which provides seats for the individual cups so formed as to register with the cup and compel the attendant to place the cups in the proper position for convenient use.The Communion Cup Filler is shown in Photo 9” (See Photo 8 & Photo 9)

(Note: Rev. Dr. Ryan was a pastor of the Methodist Episcopal Church for five (5) years in the 1890s and continued for six years longer as District Superintendent of Schools. He built the large house at the bend in Washtenaw Avenue. Prior to building the new house he lived at 607 Ellis and 212 Ellis Ypsilanti. He was married to Charlotte Hance and had 5 children)

Ypsilanti patents show the diversity of inventions, thoughts, and the intellect of the early citizens of Ypsilanti.