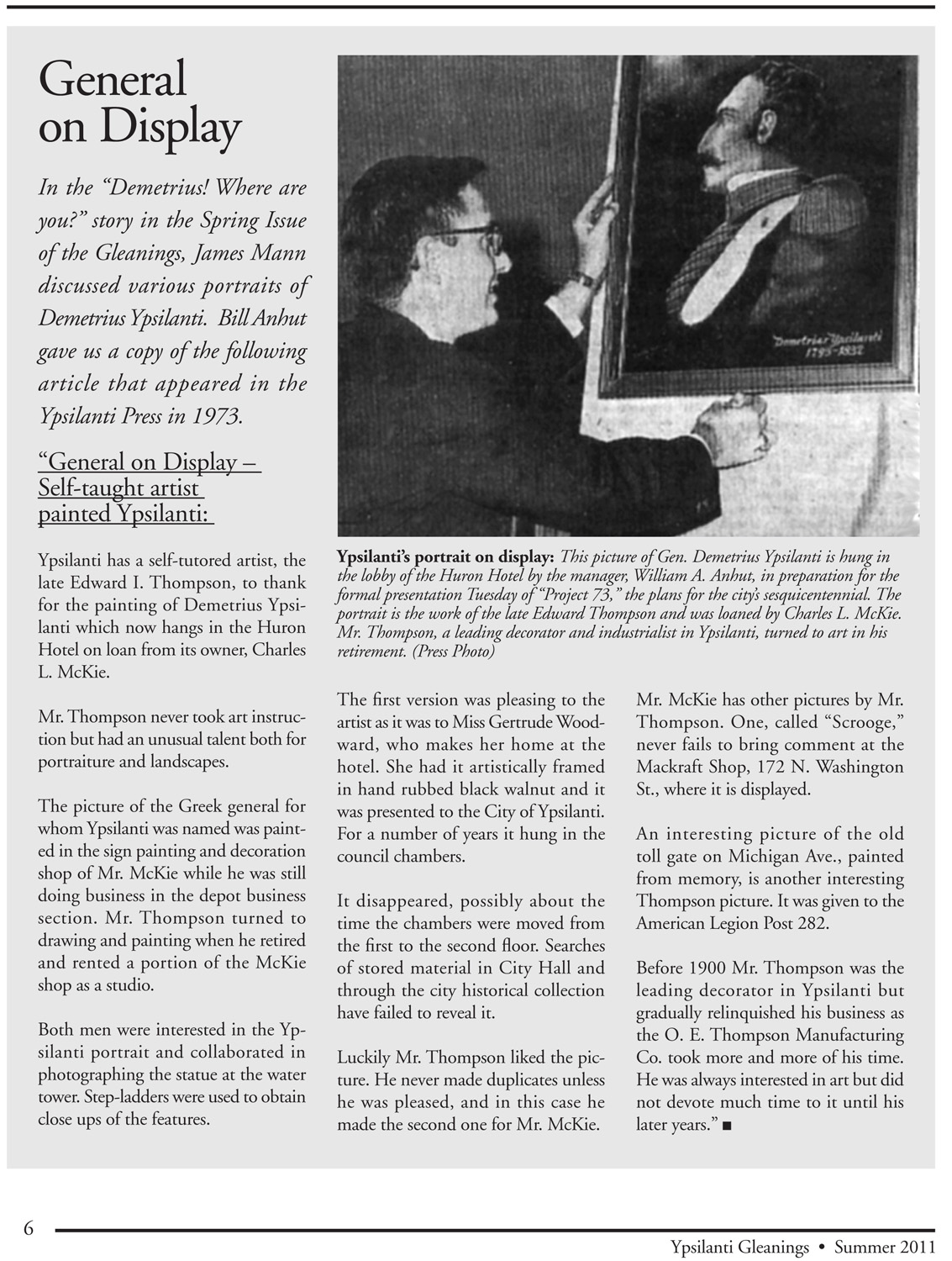 In the “Demetrius! Where are you?” story in the Spring Issue of the Gleanings, James Mann discussed various portraits of Demetrius Ypsilanti. Bill Anhut gave us a copy of the following article that appeared in the Ypsilanti Press in 1973. “General on Display – Self-taught artist painted Ypsilanti: Ypsilanti has a self-tutored artist, the late Edward I. Thompson, to thank for the painting of Demetrius Ypsilanti which now hangs in the Huron Hotel on loan from its owner, Charles L. McKie. Mr. Thompson never took art instruction but had an unusual talent both for portraiture and landscapes. The picture of the Greek general for whom Ypsilanti was named was painted in the sign painting and decoration shop of Mr. McKie while he was still doing business in the depot business section. Mr. Thompson turned to drawing and painting when he retired and rented a portion of the McKie shop as a studio. Both men were interested in the Ypsilanti portrait and collaborated in photographing the statue at the water tower. Step-ladders were used to obtain close ups of the features. The first version was pleasing to the artist as it was to Miss Gertrude Woodward, who makes her home at the hotel. She had it artistically framed in hand rubbed black walnut and it was presented to the City of Ypsilanti. For a number of years it hung in the council chambers. It disappeared, possibly about the time the chambers were moved from the first to the second floor. Searches of stored material in City Hall and through the city historical collection have failed to reveal it. Luckily Mr. Thompson liked the picture. He never made duplicates unless he was pleased, and in this case he made the second one for Mr. McKie. Mr. McKie has other pictures by Mr. Thompson. One, called “Scrooge,” never fails to bring comment at the Mackraft Shop, 172 N. Washington St., where it is displayed. An interesting picture of the old toll gate on Michigan Ave., painted from memory, is another interesting Thompson picture. It was given to the American Legion Post 282. Before 1900 Mr. Thompson was the leading decorator in Ypsilanti but gradually relinquished his business as the O. E. Thompson Manufacturing Co. took more and more of his time. He was always interested in art but did not devote much time to it until his later years.” Photo Captions: Photo: Ypsilanti’s portrait on display: This picture of Gen. Demetrius Ypsilanti is hung in the lobby of the Huron Hotel by the manager, William A. Anhut, in preparation for the formal presentation Tuesday of “Project 73,” the plans for the city’s sesquicentennial. The portrait is the work of the late Edward Thompson and was loaned by Charles L. McKie. Mr. Thompson, a leading decorator and industrialist in Ypsilanti, turned to art in his retirement. (Press Photo)