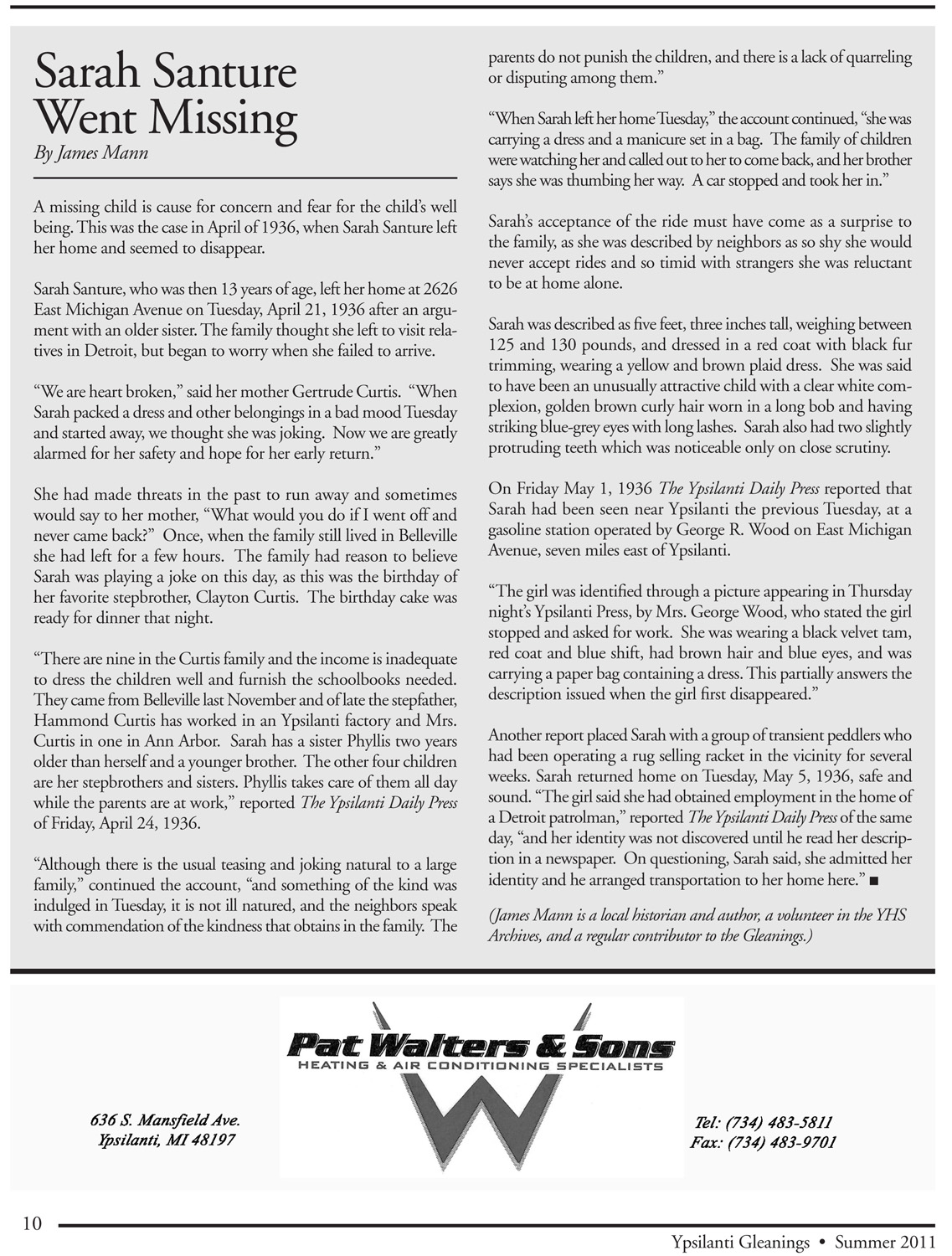 A missing child is cause for concern and fear for the child’s well being. This was the case in April of 1936, when Sarah Santure left her home and seemed to disappear.

Sarah Santure, who was then 13 years of age, left her home at 2626 East Michigan Avenue on Tuesday, April 21, 1936 after an argument with an older sister. The family thought she left to visit relatives in Detroit, but began to worry when she failed to arrive.

“We are heart broken,” said her mother Gertrude Curtis. “When Sarah packed a dress and other belongings in a bad mood Tuesday and started away, we thought she was joking. Now we are greatly alarmed for her safety and hope for her early return.”

She had made threats in the past to run away and sometimes would say to her mother, “What would you do if I went off and never came back?” Once, when the family still lived in Belleville she had left for a few hours. The family had reason to believe Sarah was playing a joke on this day, as this was the birthday of her favorite stepbrother, Clayton Curtis. The birthday cake was ready for dinner that night.

“There are nine in the Curtis family and the income is inadequate to dress the children well and furnish the schoolbooks needed. They came from Belleville last November and of late the stepfather, Hammond Curtis has worked in an Ypsilanti factory and Mrs. Curtis in one in Ann Arbor. Sarah has a sister Phyllis two years older than herself and a younger brother. The other four children are her stepbrothers and sisters. Phyllis takes care of them all day while the parents are at work,” reported The Ypsilanti Daily Press of Friday, April 24, 1936.

“Although there is the usual teasing and joking natural to a large family,” continued the account, “and something of the kind was indulged in Tuesday, it is not ill natured, and the neighbors speak with commendation of the kindness that obtains in the family. The parents do not punish the children, and there is a lack of quarreling or disputing among them.”

“When Sarah left her home Tuesday,” the account continued, “she was carrying a dress and a manicure set in a bag. The family of children were watching her and called out to her to come back, and her brother says she was thumbing her way. A car stopped and took her in.”

Sarah’s acceptance of the ride must have come as a surprise to the family, as she was described by neighbors as so shy she would never accept rides and so timid with strangers she was reluctant to be at home alone.

Sarah was described as five feet, three inches tall, weighing between 125 and 130 pounds, and dressed in a red coat with black fur trimming, wearing a yellow and brown plaid dress. She was said to have been an unusually attractive child with a clear white complexion, golden brown curly hair worn in a long bob and having striking blue-grey eyes with long lashes. Sarah also had two slightly protruding teeth which was noticeable only on close scrutiny.

On Friday May 1, 1936 The Ypsilanti Daily Press reported that Sarah had been seen near Ypsilanti the previous Tuesday, at a gasoline station operated by George R. Wood on East Michigan Avenue, seven miles east of Ypsilanti.

“The girl was identified through a picture appearing in Thursday night’s Ypsilanti Press, by Mrs. George Wood, who stated the girl stopped and asked for work. She was wearing a black velvet tam, red coat and blue shift, had brown hair and blue eyes, and was carrying a paper bag containing a dress. This partially answers the description issued when the girl first disappeared.”

Another report placed Sarah with a group of transient peddlers who had been operating a rug selling racket in the vicinity for several weeks. Sarah returned home on Tuesday, May 5, 1936, safe and sound. “The girl said she had obtained employment in the home of a Detroit patrolman,” reported The Ypsilanti Daily Press of the same day, “and her identity was not discovered until he read her description in a newspaper. On questioning, Sarah said, she admitted her identity and he arranged transportation to her home here.”