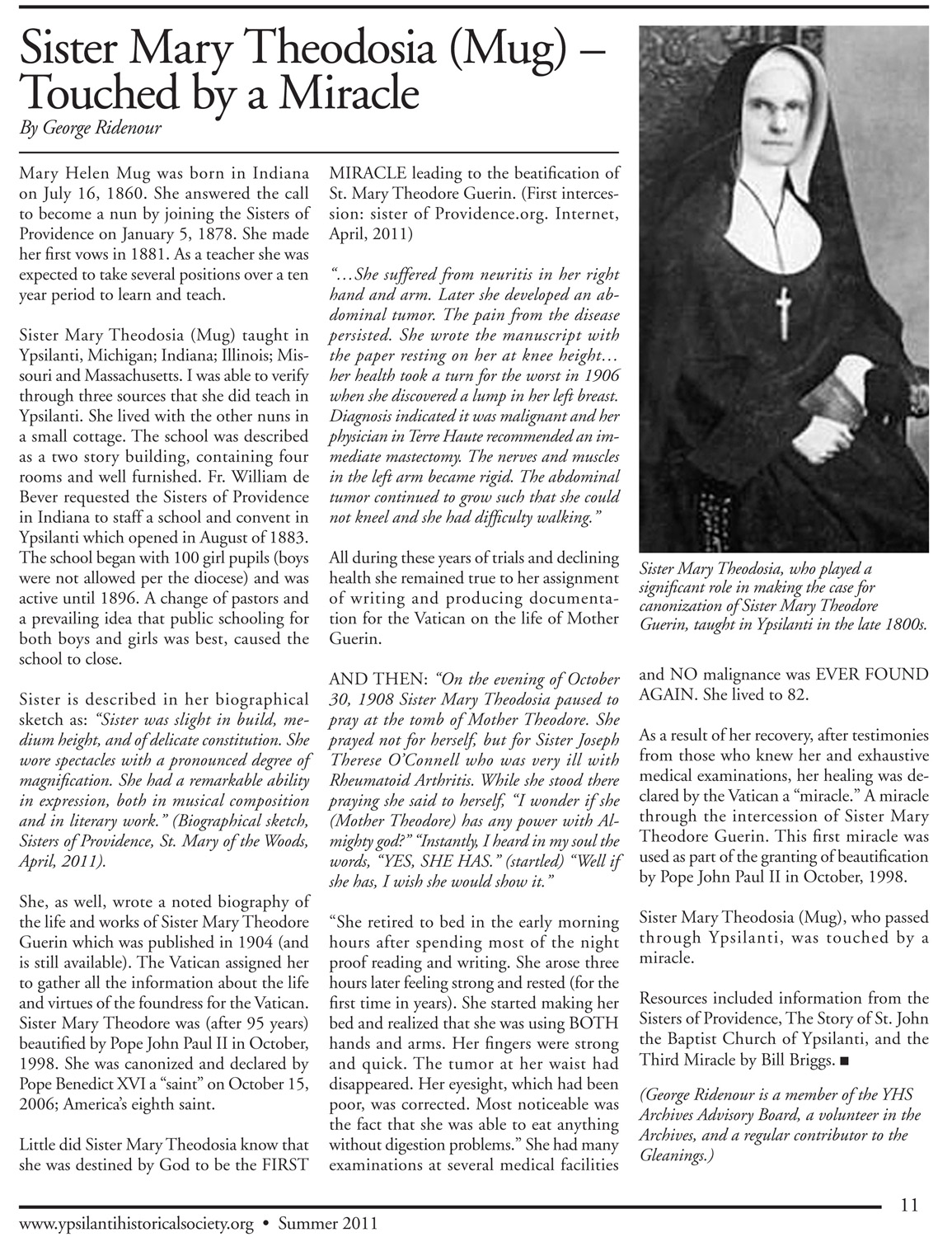 Mary Helen Mug was born in Indiana on July 16, 1860. She answered the call to become a nun by joining the Sisters of Providence on January 5, 1878. She made her first vows in 1881. As a teacher she was expected to take several positions over a ten year period to learn and teach. Sister Mary Theodosia (Mug) taught in Ypsilanti, Michigan; Indiana; Illinois; Missouri and Massachusetts. I was able to verify through three sources that she did teach in Ypsilanti. She lived with the other nuns in a small cottage. The school was described as a two story building, containing four rooms and well furnished. Fr. William de Bever requested the Sisters of Providence in Indiana to staff a school and convent in Ypsilanti which opened in August of 1883. The school began with 100 girls pupils (boys were not allowed per the diocese) and was active until 1896. A change of pastors and a prevailing idea that public schooling for both boys and girls was best, caused the school to close. Sister is described in her biographical sketch as: “Sister was slight in build, medium height, and of delicate constitution. She wore spectacles with a pronounced degree of magnification. She had a remarkable ability in expression, both in musical composition and in literary work.” (Biographical sketch, Sisters of Providence, St. Mary of the Woods, April, 2011). She, as well, wrote a noted biography of the life and works of Sister Mary Theodore Guerin which was published in 1904 (and is still available). The Vatican assigned her to gather all the information about the life and virtues of the foundress for the Vatican. Sister Mary Theodore was (after 95 years) beautified by Pope John Paul II in October, 1998. She was canonized and declared by Pope Benedict XVI a “saint” on October 15, 2006; America’s eighth saint. Little did Sister Mary Theodosia know that she was destined by God to be the FIRST MIRACLE leading to the beatification of St. Mary Theodore Guerin. (First intercession: sister of Providence.org. Internet, April, 2011) “…She suffered from neuritis in her right hand and arm. Later she developed an abdominal tumor. The pain from the disease persisted. She wrote the manuscript with the paper resting on her at knee height…her health took a turn for the worst in 1906 when she discovered a lump in her left breast. Diagnosis indicated it was malignant and her physician in Terre Haute recommended an immediate mastectomy. The nerves and muscles in the left arm became rigid. The abdominal tumor continued to grow such that she could not kneel and she had difficulty walking.” All during these years of trials and declining health she remained true to her assignment of writing and producing documentation for the Vatican on the life of Mother Guerin. AND THEN: “On the evening of October 30, 1908 Sister Mary Theodosia paused to pray at the tomb of Mother Theodore. She prayed not for herself, but for Sister Joseph Therese O’Connell who was very ill with Rheumatoid Arthritis. While she stood there praying she said to herself, “I wonder if she (Mother Theodore) has any power with Almighty god?” “Instantly, I heard in my soul the words, “YES, SHE HAS.” (startled) “Well if she has, I wish she would show it.” “She retired to bed in the early morning hours after spending most of the night proof reading and writing. She arose three hours later feeling strong and rested (for the first time in years). She started making her bed and realized that she was using BOTH hands and arms. Her fingers were strong and quick. The tumor at her waist had disappeared. Her eyesight, which had been poor, was corrected. Most noticeable was the fact that she was able to eat anything without digestion problems.” She had many examinations at several medical facilities and NO malignance was EVER FOUND AGAIN. She lived to 82. As a result of her recovery, after testimonies from those who knew her and exhaustive medical examinations, her healing was declared by the Vatican a “miracle.” A miracle through the intercession of Sister Mary Theodore Guerin. This first miracle was used as part of the granting of beautification by Pope John Paul II in October, 1998. Sister Mary Theodosia (Mug), who passed through Ypsilanti, was touched by a miracle. Resources included information from the Sisters of Providence, The Story of St. John the Baptist Church of Ypsilanti, and the Third Miracle by Bill Briggs. (George Ridenour is a member of the YHS Archives Advisory Board, a volunteer in the Archives, and a regular contributor to the Gleanings.) Photo Captions: Photo 1: Sister Mary Theodosia, who played a significant role in making the case for canonization of Sister Mary Theodore Guerin, taught in Ypsilanti in the late 1800s.