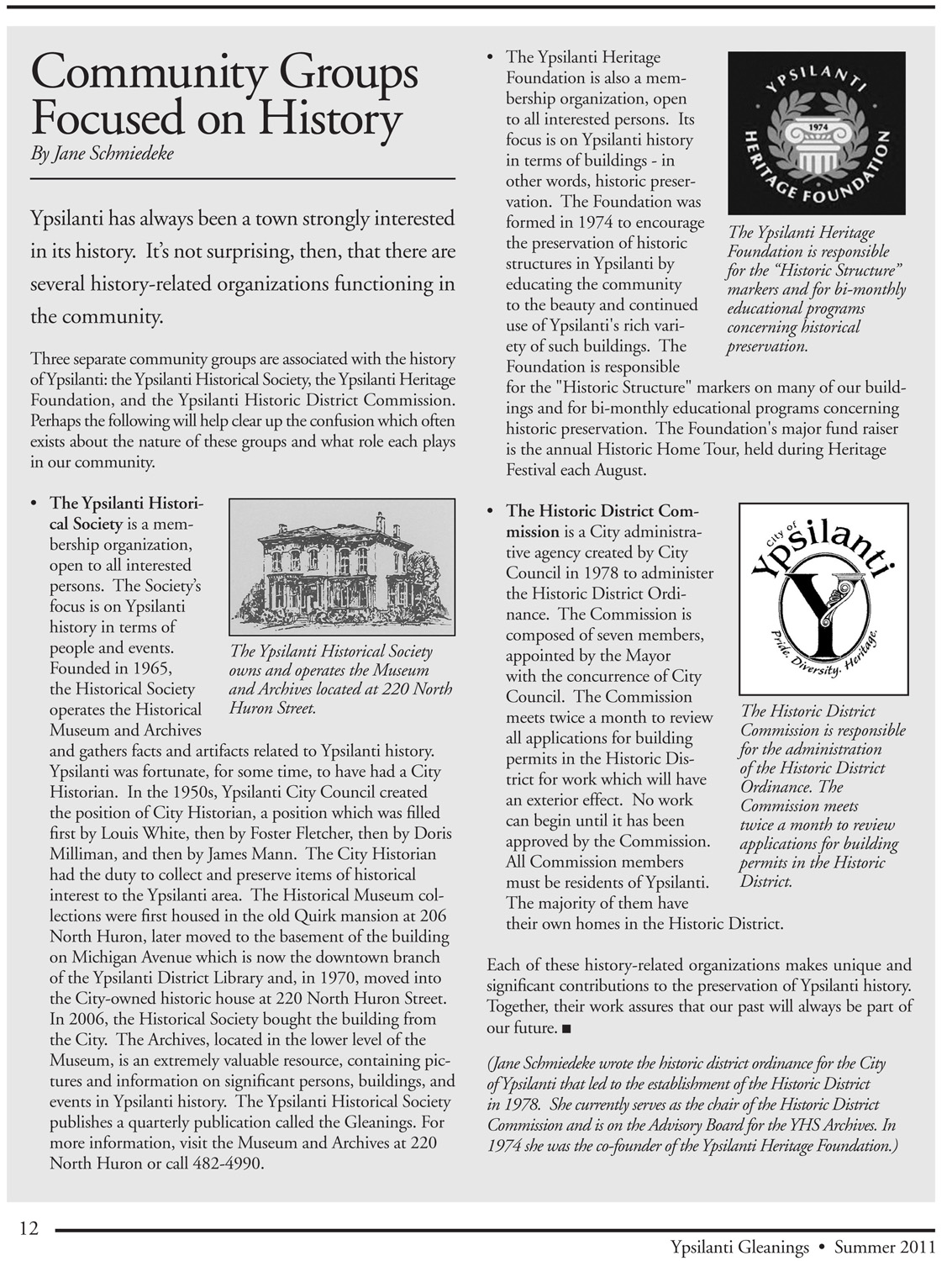 Ypsilanti has always been a town strongly interested in its history. It’s not surprising, then, that there are several history-related organizations functioning in the community. Three separate community groups are associated with the history of Ypsilanti: the Ypsilanti Historical Society, the Ypsilanti Heritage Foundation, and the Ypsilanti Historic District Commission. Perhaps the following will help clear up the confusion which often exists about the nature of these groups and what role each plays in our community. The Ypsilanti Historical Society is a membership organization, open to all interested persons. The Society’s focus is on Ypsilanti history in terms of people and events. Founded in 1965, the Historical Society operates the Historical Museum and Archives and gathers facts and artifacts related to Ypsilanti history. Ypsilanti was fortunate, for some time, to have had a City Historian. In the 1950s, Ypsilanti City Council created the position of City Historian, a position which was filled first by Louis White, then by Foster Fletcher, then by Doris Milliman, and then by James Mann. The City Historian had the duty to collect and preserve items of historical interest to the Ypsilanti area. The Historical Museum collections were first housed in the old Quirk mansion at 206 North Huron, later moved to the basement of the building on Michigan Avenue which is now the downtown branch of the Ypsilanti District Library and, in 1970, moved into the City-owned historic house at 220 North Huron Street. In 2006, the Historical Society bought the building from the City. The Archives, located in the lower level of the Museum, is an extremely valuable resource, containing pictures and information on significant persons, buildings, and events in Ypsilanti history. The Ypsilanti Historical Society publishes a quarterly publication called the Gleanings. For more information, visit the Museum and Archives at 220 North Huron or call 482-4990. The Ypsilanti Heritage Foundation is also a membership organization, open to all interested persons. Its focus is on Ypsilanti history in terms of buildings - in other words, historic preservation. The Foundation was formed in 1974 to encourage the preservation of historic structures in Ypsilanti by educating the community to the beauty and continued use of Ypsilanti's rich variety of such buildings. The Foundation is responsible for the "Historic Structure" markers on many of our buildings and for bi-monthly educational programs concerning historic preservation. The Foundation's major fund raiser is the annual Historic Home Tour, held during Heritage Festival each August. The Historic District Commission is a City administrative agency created by City Council in 1978 to administer the Historic District Ordinance. The Commission is composed of seven members, appointed by the Mayor with the concurrence of City Council. The Commission meets twice a month to review all applications for building permits in the Historic District for work which will have an exterior effect. No work can begin until it has been approved by the Commission. All Commission members must be residents of Ypsilanti. The majority of them have their own homes in the Historic District. Each of these history-related organizations makes unique and significant contributions to the preservation of Ypsilanti history. Together, their work assures that our past will always be part of our future. (Jane Schmiedeke wrote the historic district ordinance for the City of Ypsilanti that led to the establishment of the Historic District in 1978. She currently serves as the chair of the Historic District Commission and is on the Advisory Board for the YHS Archives. In 1974 she was the co-founder of the Ypsilanti Heritage Foundation.) Photo Captions: Photo 1: The Ypsilanti Historical Society owns and operates the Museum and Archives located at 220 North Huron Street.

Photo 2: The Ypsilanti Heritage Foundation is responsible for the “Historic Structure” markers and for bi-monthly educational programs concerning historical preservation.