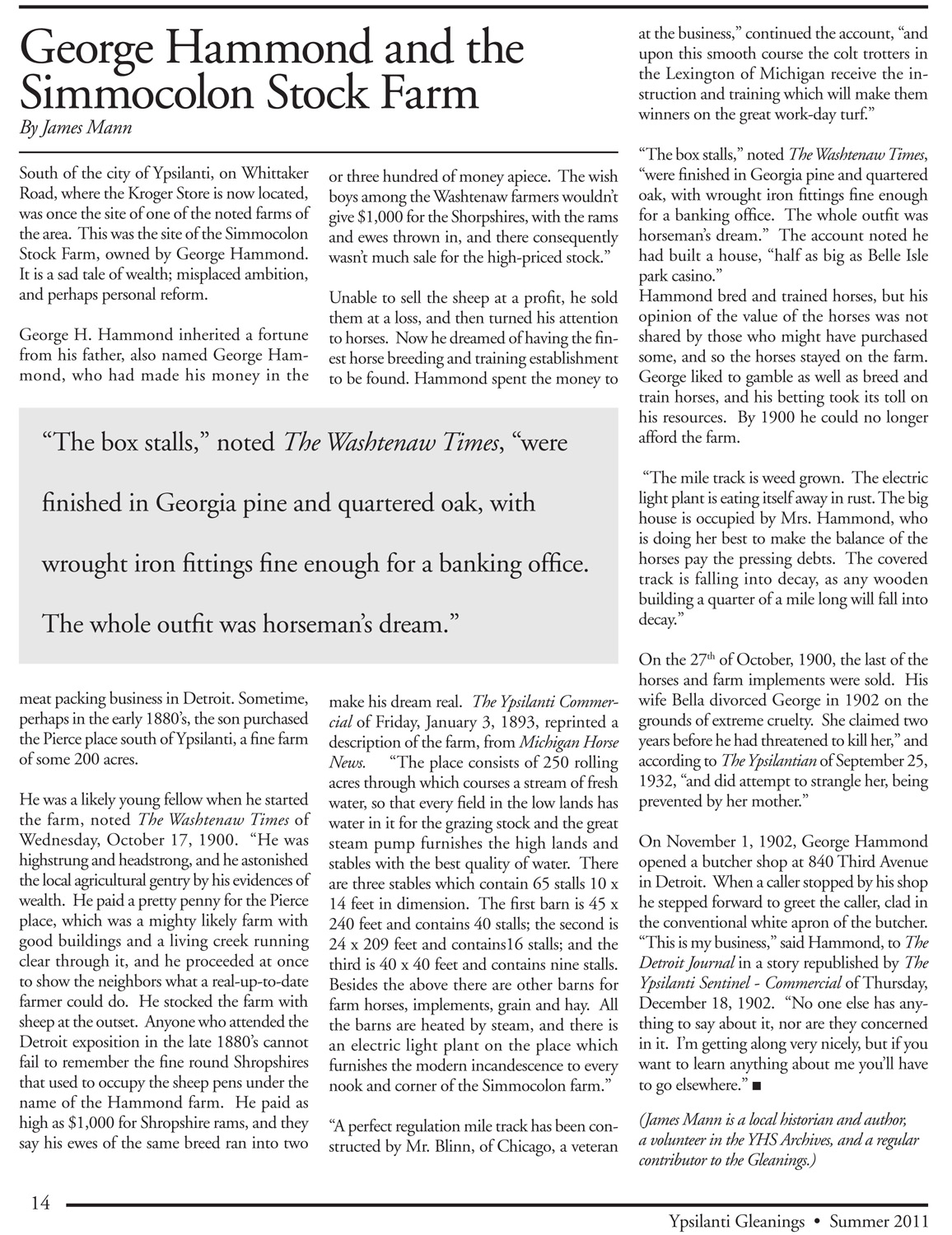 South of the city of Ypsilanti, on Whittaker Road, where the Kroger Store is now located, was once the site of one of the noted farms of the area. This was the site of the Simmocolon Stock Farm, owned by George Hammond. It is a sad tale of wealth; misplaced ambition, and perhaps personal reform.

George H. Hammond inherited a fortune from his father, also named George Hammond, who had made his money in the meat packing business in Detroit. Sometime, perhaps in the early 1880’s, the son purchased the Pierce place south of Ypsilanti, a fine farm of some 200 acres.

He was a likely young fellow when he started the farm, noted The Washtenaw Times of Wednesday, October 17, 1900. “He was highstrung and headstrong, and he astonished the local agricultural gentry by his evidences of wealth. He paid a pretty penny for the Pierce place, which was a mighty likely farm with good buildings and a living creek running clear through it, and he proceeded at once to show the neighbors what a real-up-to-date farmer could do. He stocked the farm with sheep at the outset. Anyone who attended the Detroit exposition in the late 1880’s cannot fail to remember the fine round Shropshires that used to occupy the sheep pens under the name of the Hammond farm. He paid as high as $1,000 for Shropshire rams, and they say his ewes of the same breed ran into two or three hundred of money apiece. The wish boys among the Washtenaw farmers wouldn’t give $1,000 for the Shorpshires, with the rams and ewes thrown in, and there consequently wasn’t much sale for the high-priced stock.”

Unable to sell the sheep at a profit, he sold them at a loss, and then turned his attention to horses. Now he dreamed of having the finest horse breeding and training establishment to be found. Hammond spent the money to make his dream real. The Ypsilanti Commercial of Friday, January 3, 1893, reprinted a description of the farm, from Michigan Horse News. “The place consists of 250 rolling acres through which courses a stream of fresh water, so that every field in the low lands has water in it for the grazing stock and the great steam pump furnishes the high lands and stables with the best quality of water. There are three stables which contain 65 stalls 10 x 14 feet in dimension. The first barn is 45 x 240 feet and contains 40 stalls; the second is 24 x 209 feet and contains16 stalls; and the third is 40 x 40 feet and contains nine stalls. Besides the above there are other barns for farm horses, implements, grain and hay. All the barns are heated by steam, and there is an electric light plant on the place which furnishes the modern incandescence to every nook and corner of the Simmocolon farm.”

“A perfect regulation mile track has been constructed by Mr. Blinn, of Chicago, a veteran at the business,” continued the account, “and upon this smooth course the colt trotters in the Lexington of Michigan receive the instruction and training which will make them winners on the great work-day turf.”

“The box stalls,” noted The Washtenaw Times, “were finished in Georgia pine and quartered oak, with wrought iron fittings fine enough for a banking office. The whole outfit was horseman’s dream.” The account noted he had built a house, “half as big as Belle Isle park casino.”
Hammond bred and trained horses, but his opinion of the value of the horses was not shared by those who might have purchased some, and so the horses stayed on the farm. George liked to gamble as well as breed and train horses, and his betting took its toll on his resources. By 1900 he could no longer afford the farm.

“The mile track is weed grown. The electric light plant is eating itself away in rust. The big house is occupied by Mrs. Hammond, who is doing her best to make the balance of the horses pay the pressing debts. The covered track is falling into decay, as any wooden building a quarter of a mile long will fall into decay.”

On the 27th of October, 1900, the last of the horses and farm implements were sold. His wife Bella divorced George in 1902 on the grounds of extreme cruelty. She claimed two years before he had threatened to kill her,” and according to The Ypsilantian of September 25, 1932, “and did attempt to strangle her, being prevented by her mother.”

On November 1, 1902, George Hammond opened a butcher shop at 840 Third Avenue in Detroit. When a caller stopped by his shop he stepped forward to greet the caller, clad in the conventional white apron of the butcher. “This is my business,” said Hammond, to The Detroit Journal in a story republished by The Ypsilanti Sentinel - Commercial of Thursday, December 18, 1902. “No one else has anything to say about it, nor are they concerned in it. I’m getting along very nicely, but if you want to learn anything about me you’ll have to go elsewhere.”