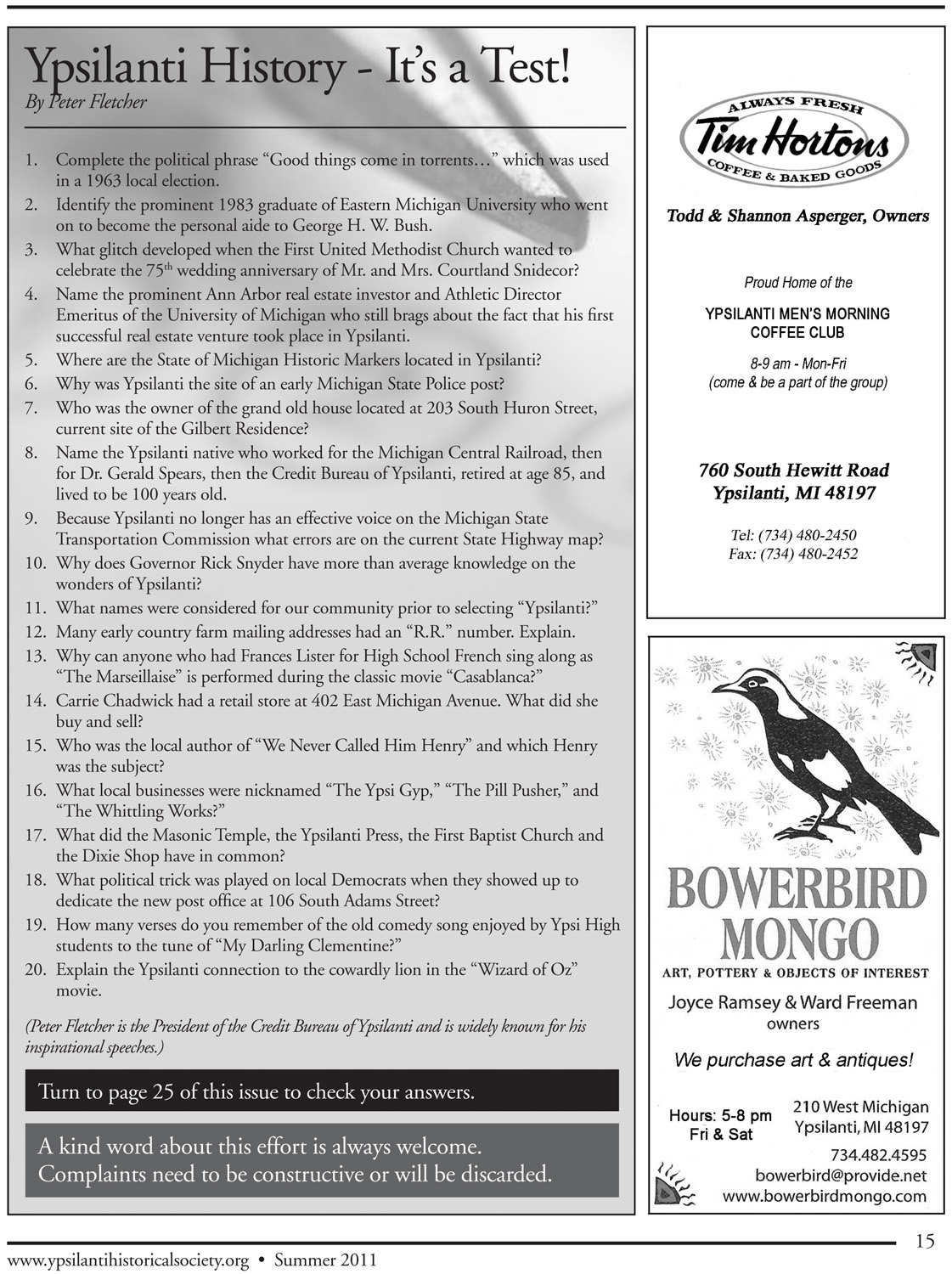 1. Complete the political phrase “Good things come in torrents…” which was used in a 1963 local election.
2. Identify the prominent 1983 graduate of Eastern Michigan University who went on to become the personal aide to George H. W. Bush.
3. What glitch developed when the First United Methodist Church wanted to celebrate the 75th wedding anniversary of Mr. and Mrs. Courtland Snidecor?
4. Name the prominent Ann Arbor real estate investor and Athletic Director Emeritus of the University of Michigan who still brags about the fact that his first successful real estate venture took place in Ypsilanti.
5. Where are the State of Michigan Historic Markers located in Ypsilanti?
6. Why was Ypsilanti the site of an early Michigan State Police post?
7. Who was the owner of the grand old house located at 203 South Huron Street, current site of the Gilbert Residence?
8. Name the Ypsilanti native who worked for the Michigan Central Railroad, then for Dr. Gerald Spears, then the Credit Bureau of Ypsilanti, retired at age 85, and lived to be 100 years old.
9. Because Ypsilanti no longer has an effective voice on the Michigan State Transportation Commission what errors are on the current State Highway map?
10. Why does Governor Rick Snyder have more than average knowledge on the wonders of Ypsilanti?
11. What names were considered for our community prior to selecting “Ypsilanti?”
12. Many early country farm mailing addresses had an “R.R.” number. Explain.
13. Why can anyone who had Frances Lister for High School French sing along as “The Marseillaise” is performed during the classic movie “Casablanca?”
14. Carrie Chadwick had a retail store at 402 East Michigan Avenue. What did she buy and sell?
15. Who was the local author of “We Never Called Him Henry” and which Henry was the subject?
16. What local businesses were nicknamed “The Ypsi Gyp,” “The Pill Pusher,” and “The Whittling Works?”
17. What did the Masonic Temple, the Ypsilanti Press, the First Baptist Church and the Dixie Shop have in common?
18. What political trick was played on local Democrats when they showed up to dedicate the new post office at 106 South Adams Street?
19. How many verses do you remember of the old comedy song enjoyed by Ypsi High students to the tune of “My Darling Clementine?”
20. Explain the Ypsilanti connection to the cowardly lion in the “Wizard of Oz” movie.

A kind word about this effort is always welcome. Complaints need to be constructive or will be discarded.