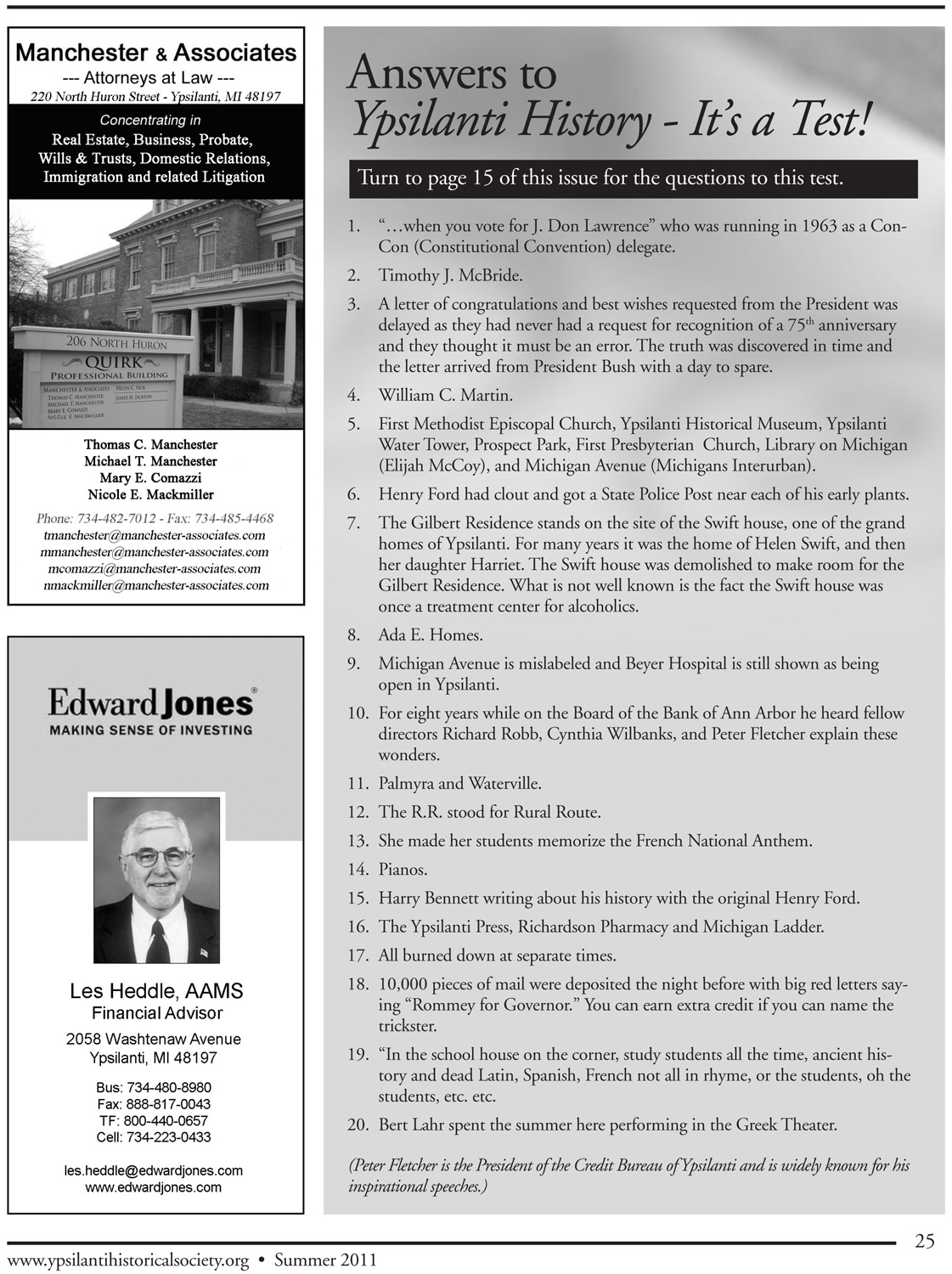 (Answers for the test)

1. “…when you vote for J. Don Lawrence” who was running in 1963 as a Con-Con (Constitutional Convention) delegate.
2. Timothy J. McBride.
3. A letter of congratulations and best wishes requested from the President was delayed as they had never had a request for recognition of a 75th anniversary and they thought it must be an error. The truth was discovered in time and the letter arrived from President Bush with a day to spare.
4. William C. Martin.
5. First Methodist Episcopal Church, Ypsilanti Historical Museum, Ypsilanti Water Tower, Prospect Park, First Presbyterian Church, Library on Michigan (Elijah McCoy), and Michigan Avenue (Michigans Interurban).
6. Henry Ford had clout and got a State Police Post near each of his early plants.
7. The Gilbert Residence stands on the site of the Swift house, one of the grand homes of Ypsilanti. For many years it was the home of Helen Swift, and then her daughter Harriet. The Swift house was demolished to make room for the Gilbert Residence. What is not well known is the fact the Swift house was once a treatment center for alcoholics.
8. Ada E. Homes.
9. Michigan Avenue is mislabeled and Beyer Hospital is still shown as being open in Ypsilanti.
10. For eight years while on the Board of the Bank of Ann Arbor he heard fellow directors Richard Robb, Cynthia Wilbanks, and Peter Fletcher explain these wonders.
11. Palmyra and Waterville.
12. The R.R. stood for Rural Route.
13. She made her students memorize the French National Anthem.
14. Pianos.
15. Harry Bennett writing about his history with the original Henry Ford.
16. The Ypsilanti Press, Richardson Pharmacy and Michigan Ladder.
17. All burned down at separate times.
18. 10,000 pieces of mail were deposited the night before with big red letters saying “Rommey for Governor.” You can earn extra credit if you can name the trickster.
19. “In the school house on the corner, study students all the time, ancient history and dead Latin, Spanish, French not all in rhyme, or the students, oh the students, etc. etc.
20. Bert Lahr spent the summer here performing in the Greek Theater.