A Picnic in the Park: a Snapshot of Ypsilanti Family Life in the 1950s 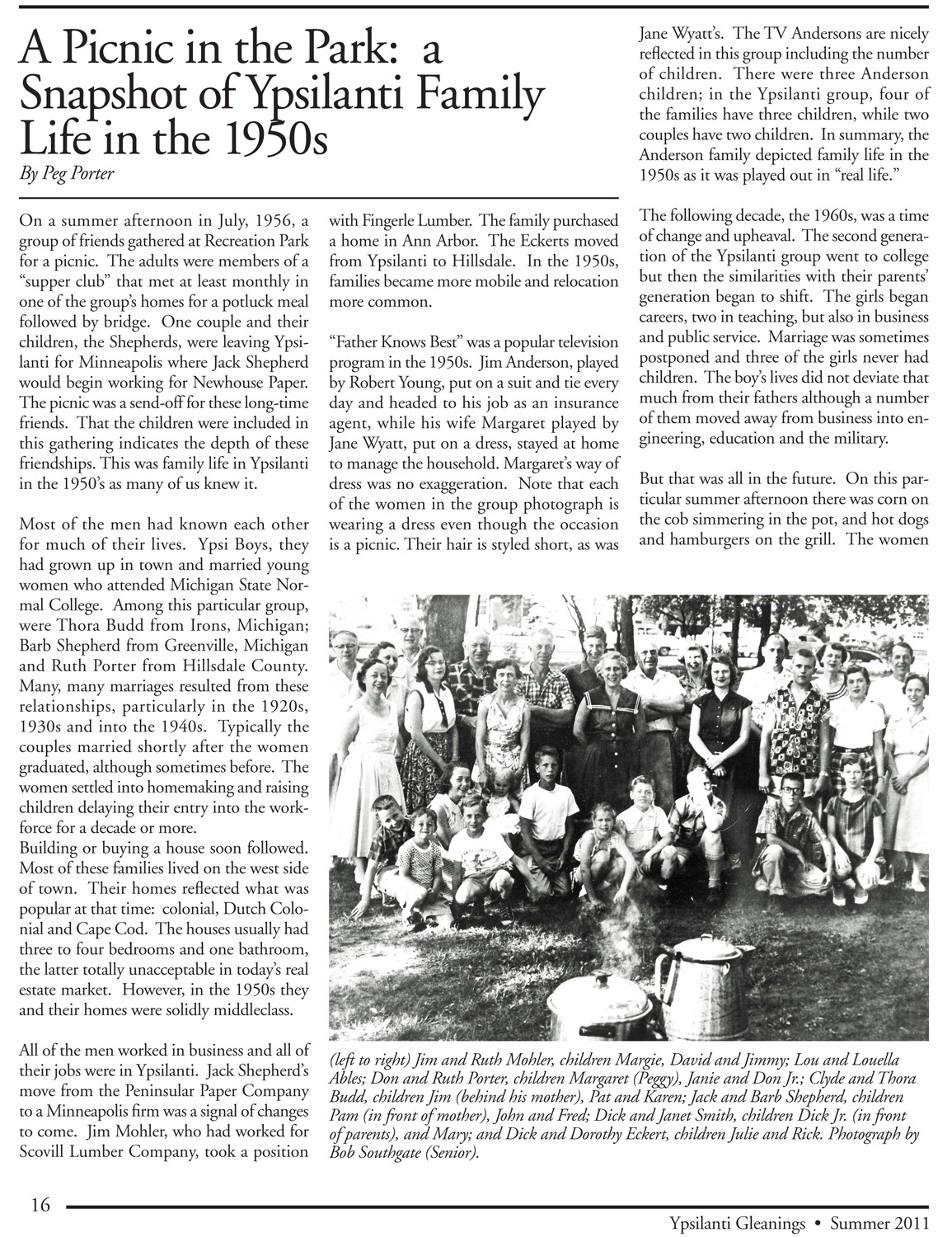 On a summer afternoon in July, 1956, a group of friends gathered at Recreation Park for a picnic. The adults were members of a “supper club” that met at least monthly in one of the group’s homes for a potluck meal followed by bridge. One couple and their children, the Shepherds, were leaving Ypsilanti for Minneapolis where Jack Shepherd would begin working for Newhouse Paper. The picnic was a send-off for these long-time friends. That the children were included in this gathering indicates the depth of these friendships. This was family life in Ypsilanti in the 1950’s as many of us knew it. Most of the men had known each other for much of their lives. Ypsi Boys, they had grown up in town and married young women who attended Michigan State Normal College. Among this particular group, were Thora Budd from Irons, Michigan; Barb Shepherd from Greenville, Michigan and Ruth Porter from Hillsdale County. Many, many marriages resulted from these relationships, particularly in the 1920s, 1930s and into the 1940s. Typically the couples married shortly after the women graduated, although sometimes before. The women settled into homemaking and raising children delaying their entry into the workforce for a decade or more. Building or buying a house soon followed. Most of these families lived on the west side of town. Their homes reflected what was popular at that time: colonial, Dutch Colonial and Cape Cod. The houses usually had three to four bedrooms and one bathroom, the latter totally unacceptable in today’s real estate market. However, in the 1950s they and their homes were solidly middleclass. All of the men worked in business and all of their jobs were in Ypsilanti. Jack Shepherd’s move from the Peninsular Paper Company to a Minneapolis firm was a signal of changes to come. Jim Mohler, who had worked for Scovill Lumber Company, took a position with Fingerle Lumber. The family purchased a home in Ann Arbor. The Eckerts moved from Ypsilanti to Hillsdale. In the 1950s, families became more mobile and relocation more common. “Father Knows Best” was a popular television program in the 1950s. Jim Anderson, played by Robert Young, put on a suit and tie every day and headed to his job as an insurance agent, while his wife Margaret played by Jane Wyatt, put on a dress, stayed at home to manage the household. Margaret’s way of dress was no exaggeration. Note that each of the women in the group photograph is wearing a dress even though the occasion is a picnic. Their hair is styled short, as was Jane Wyatt’s. The TV Andersons are nicely reflected in this group including the number of children. There were three Anderson children; in the Ypsilanti group, four of the families have three children, while two couples have two children. In summary, the Anderson family depicted family life in the 1950s as it was played out in “real life.” The following decade, the 1960s, was a time of change and upheaval. The second generation of the Ypsilanti group went to college but then the similarities with their parents’ generation began to shift. The girls began careers, two in teaching, but also in business and public service. Marriage was sometimes postponed and three of the girls never had children. The boy’s lives did not deviate that much from their fathers although a number of them moved away from business into engineering, education and the military. But that was all in the future. On this particular summer afternoon there was corn on the cob simmering in the pot, and hot dogs and hamburgers on the grill. The women busied themselves with the food, while the men chatted and told jokes. The younger kids played in the park, while the teenagers “hung around.” It was a family picnic, a gathering of old friends. A personal note: the 12 months leading up to the picnic were difficult for me. In August, 1955, I had polio and spent nearly three months in the University of Michigan Hospital. Polio epidemics in the 1940s and 1950s left many children and young adults paralyzed. Fortunately successful vaccines were developed by Drs. Salk and Sabin in the 1950s, an important medical breakthrough. For those of us who were stricken before the vaccines became readily available, life presented many challenges. Less than two months before this picture was taken, I had fallen and broke my left collarbone. Ironically the accident occurred in Recreation Park. (Peg Porter is the Assistant Editor and a regular contributor to the Gleanings.) Photo Captions: Photo 1: (left to right) Jim and Ruth Mohler, children Margie, David and Jimmy; Lou and Louella Ables; Don and Ruth Porter, children Margaret (Peggy), Janie and Don Jr.; Clyde and Thora Budd, children Jim (behind his mother), Pat and Karen; Jack and Barb Shepherd, children Pam (in front of mother), John and Fred; Dick and Janet Smith, children Dick Jr. (in front of parents), and Mary; and Dick and Dorothy Eckert, children Julie and Rick. Photograph by Bob Southgate (Senior).