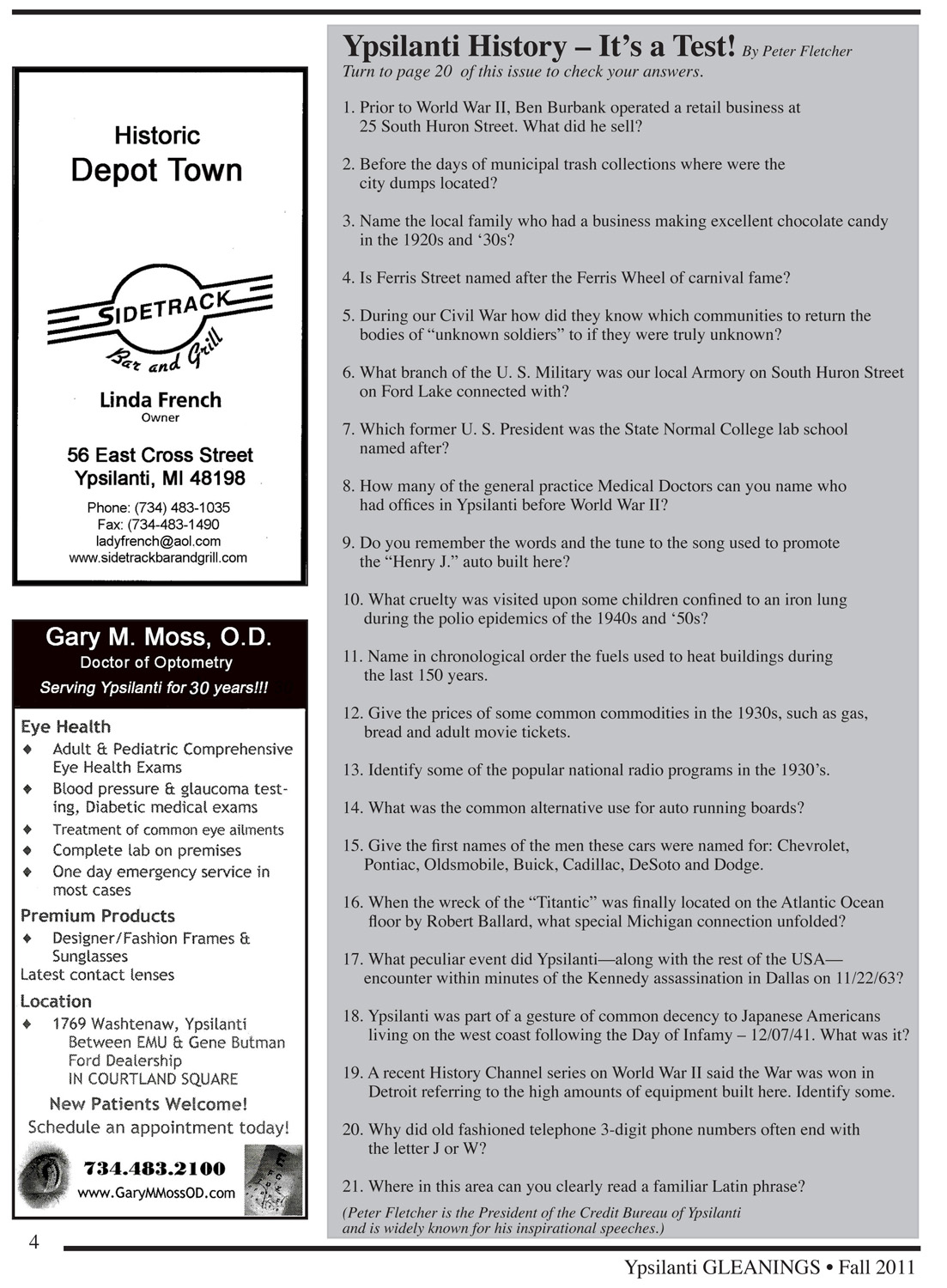 1. Prior to World War II, Ben Burbank operated a retail business at
25 South Huron Street. What did he sell?

2. Before the days of municipal trash collections where were the
city dumps located?

3. Name the local family who had a business making excellent chocolate candy
in the 1920s and ‘30s?

4. Is Ferris Street named after the Ferris Wheel of carnival fame?

5. During our Civil War how did they know which communities to return the
bodies of “unknown soldiers” to if they were truly unknown?

6. What branch of the U. S. Military was our local Armory on South Huron Street
on Ford Lake connected with?

7. Which former U. S. President was the State Normal College lab school
named after?

8. How many of the general practice Medical Doctors can you name who
had offices in Ypsilanti before World War II?

9. Do you remember the words and the tune to the song used to promote
the “Henry J.” auto built here?

10. What cruelty was visited upon some children confined to an iron lung
during the polio epidemics of the 1940s and ‘50s?

11. Name in chronological order the fuels used to heat buildings during
the last 150 years.

12. Give the prices of some common commodities in the 1930s, such as gas,
bread and adult movie tickets.

13. Identify some of the popular national radio programs in the 1930’s.

14. What was the common alternative use for auto running boards?

15. Give the first names of the men these cars were named for: Chevrolet,
Pontiac, Oldsmobile, Buick, Cadillac, DeSoto and Dodge.

16. When the wreck of the “Titantic” was finally located on the Atlantic Ocean
floor by Robert Ballard, what special Michigan connection unfolded?

17. What peculiar event did Ypsilanti––along with the rest of the USA––
encounter within minutes of the Kennedy assassination in Dallas on 11/22/63?

18. Ypsilanti was part of a gesture of common decency to Japanese Americans
living on the west coast following the Day of Infamy – 12/07/41. What was it?

19. A recent History Channel series on World War II said the War was won in
Detroit referring to the high amounts of equipment built here. Identify some.

20. Why did old fashioned telephone 3-digit phone numbers often end with
the letter J or W?

21. Where in this area can you clearly read a familiar Latin phrase?