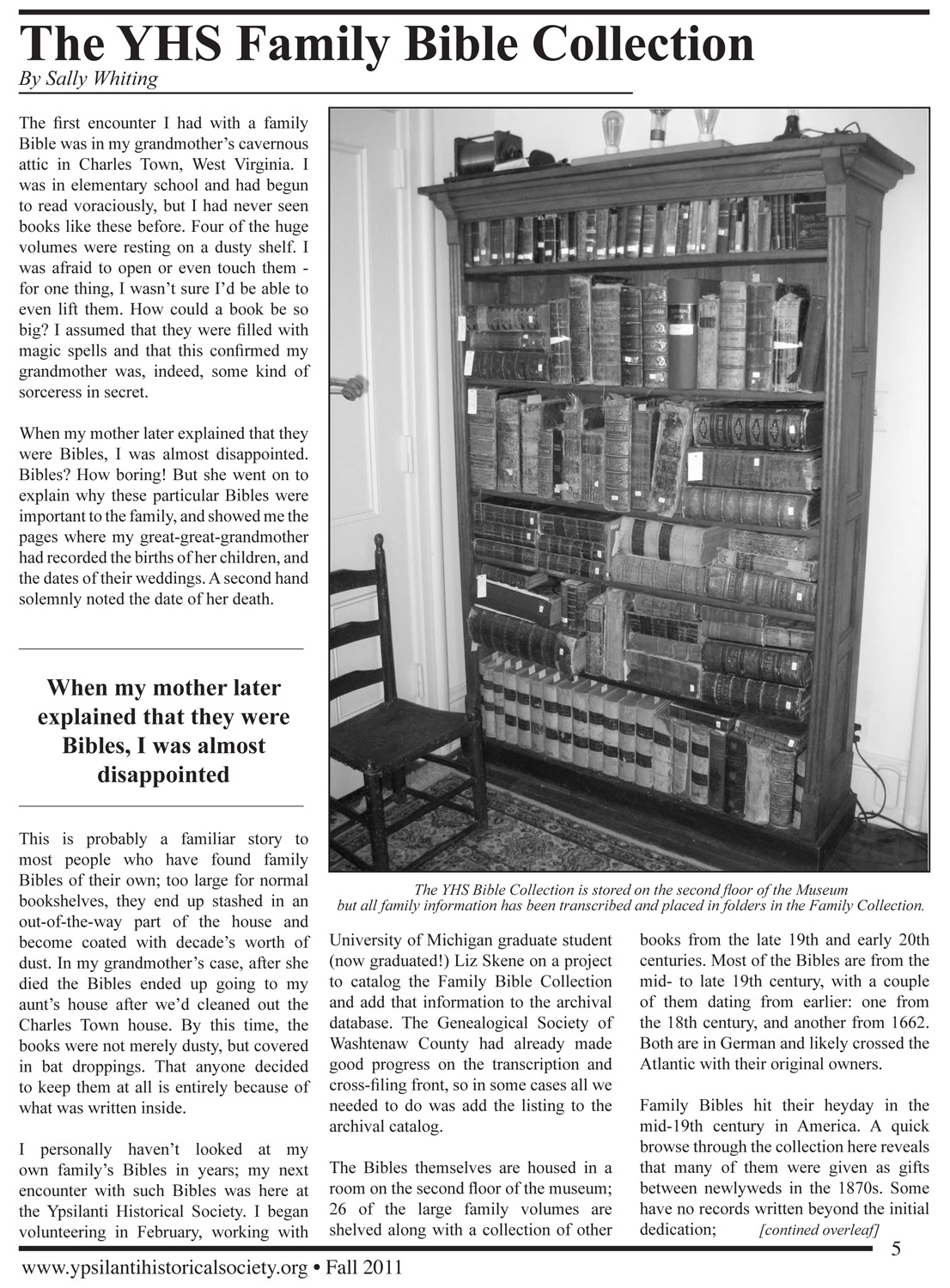 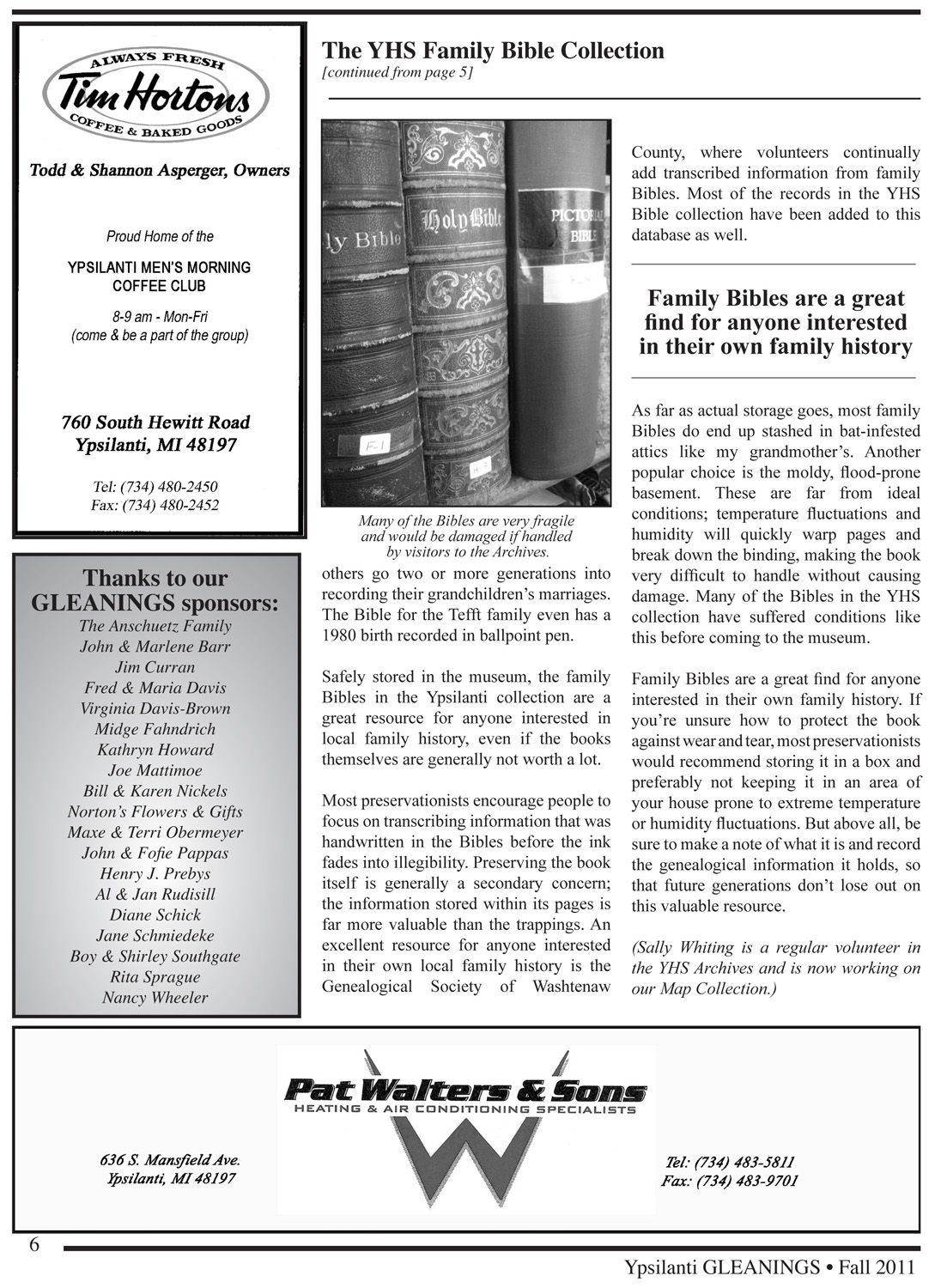 The first encounter I had with a family Bible was in my grandmother’s cavernous attic in Charles Town, West Virginia. I was in elementary school and had begun to read voraciously, but I had never seen books like these before. Four of the huge volumes were resting on a dusty shelf. I was afraid to open or even touch them - for one thing, I wasn’t sure I’d be able to even lift them. How could a book be so big? I assumed that they were filled with magic spells and that this confirmed my grandmother was, indeed, some kind of sorceress in secret. When my mother later explained that they were Bibles, I was almost disappointed. Bibles? How boring! But she went on to explain why these particular Bibles were important to the family, and showed me the pages where my great-great-grandmother had recorded the births of her children, and the dates of their weddings. A second hand solemnly noted the date of her death. This is probably a familiar story to most people who have found family Bibles of their own; too large for normal bookshelves, they end up stashed in an out-of-the-way part of the house and become coated with decade’s worth of dust. In my grandmother’s case, after she died the Bibles ended up going to my aunt’s house after we’d cleaned out the Charles Town house. By this time, the books were not merely dusty, but covered in bat droppings. That anyone decided to keep them at all is entirely because of what was written inside. I personally haven’t looked at my own family’s Bibles in years; my next encounter with such Bibles was here at the Ypsilanti Historical Society. I began volunteering in February, working with University of Michigan graduate student (now graduated!) Liz Skene on a project to catalog the Family Bible Collection and add that information to the archival database. The Genealogical Society of Washtenaw County had already made good progress on the transcription and cross-filing front, so in some cases all we needed to do was add the listing to the archival catalog. The Bibles themselves are housed in a room on the second floor of the museum; 26 of the large family volumes are shelved along with a collection of other books from the late 19th and early 20th centuries. Most of the Bibles are from the mid- to late 19th century, with a couple of them dating from earlier: one from the 18th century, and another from 1662. Both are in German and likely crossed the Atlantic with their original owners. Family Bibles hit their heyday in the mid-19th century in America. A quick browse through the collection here reveals that many of them were given as gifts between newlyweds in the 1870s. Some have no records written beyond the initial dedication; recording their grandchildren’s marriages. The Bible for the Tefft family even has a 1980 birth recorded in ballpoint pen. Safely stored in the museum, the family Bibles in the Ypsilanti collection are a great resource for anyone interested in local family history, even if the books themselves are generally not worth a lot. Most preservationists encourage people to focus on transcribing information that was handwritten in the Bibles before the ink fades into illegibility. Preserving the book itself is generally a secondary concern; the information stored within its pages is far more valuable than the trappings. An excellent resource for anyone interested in their own local family history is the Genealogical Society of Washtenaw County, where volunteers continually add transcribed information from family Bibles. Most of the records in the YHS Bible collection have been added to this database as well. As far as actual storage goes, most family Bibles do end up stashed in bat-infested attics like my grandmother’s. Another popular choice is the moldy, flood-prone basement. These are far from ideal conditions; temperature fluctuations and humidity will quickly warp pages and break down the binding, making the book very difficult to handle without causing damage. Many of the Bibles in the YHS collection have suffered conditions like this before coming to the museum. Family Bibles are a great find for anyone interested in their own family history. If you’re unsure how to protect the book against wear and tear, most preservationists would recommend storing it in a box and preferably not keeping it in an area of your house prone to extreme temperature or humidity fluctuations. But above all, be sure to make a note of what it is and record the genealogical information it holds, so that future generations don’t lose out on this valuable resource. (Sally Whiting is a regular volunteer in the YHS Archives and is now working on our Map Collection.)

PHOTO CAPTIONS:
Photo 1: The YHS Bible Collection is stored on the second floor of the Museum but all family information has been transcribed and placed in folders in the Family Collection.

Photo 2: Many of the Bibles are very fragile and would be damaged if handled by visitors to the Archives.