The Mystery of the Civil War Blood Vials 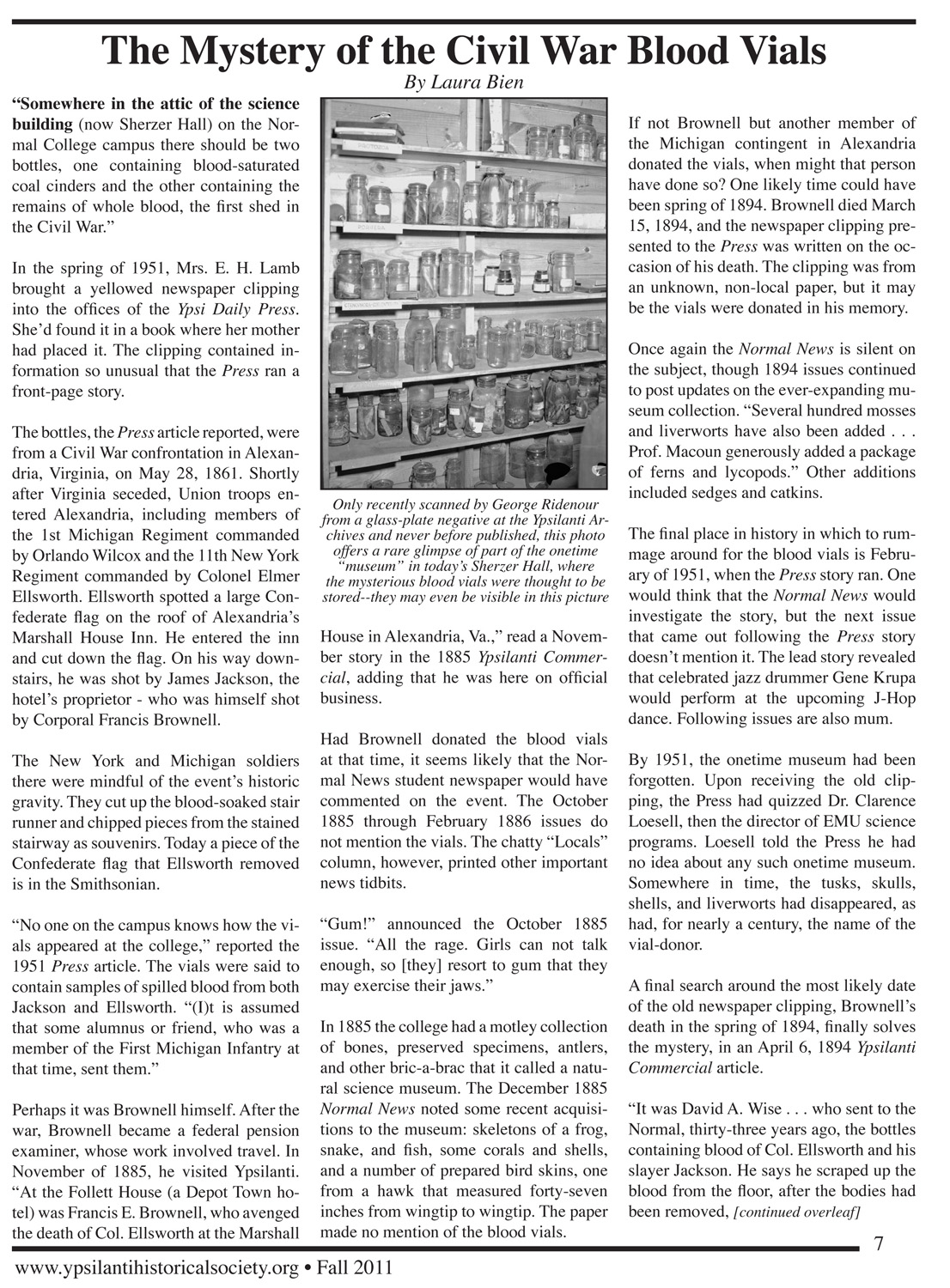 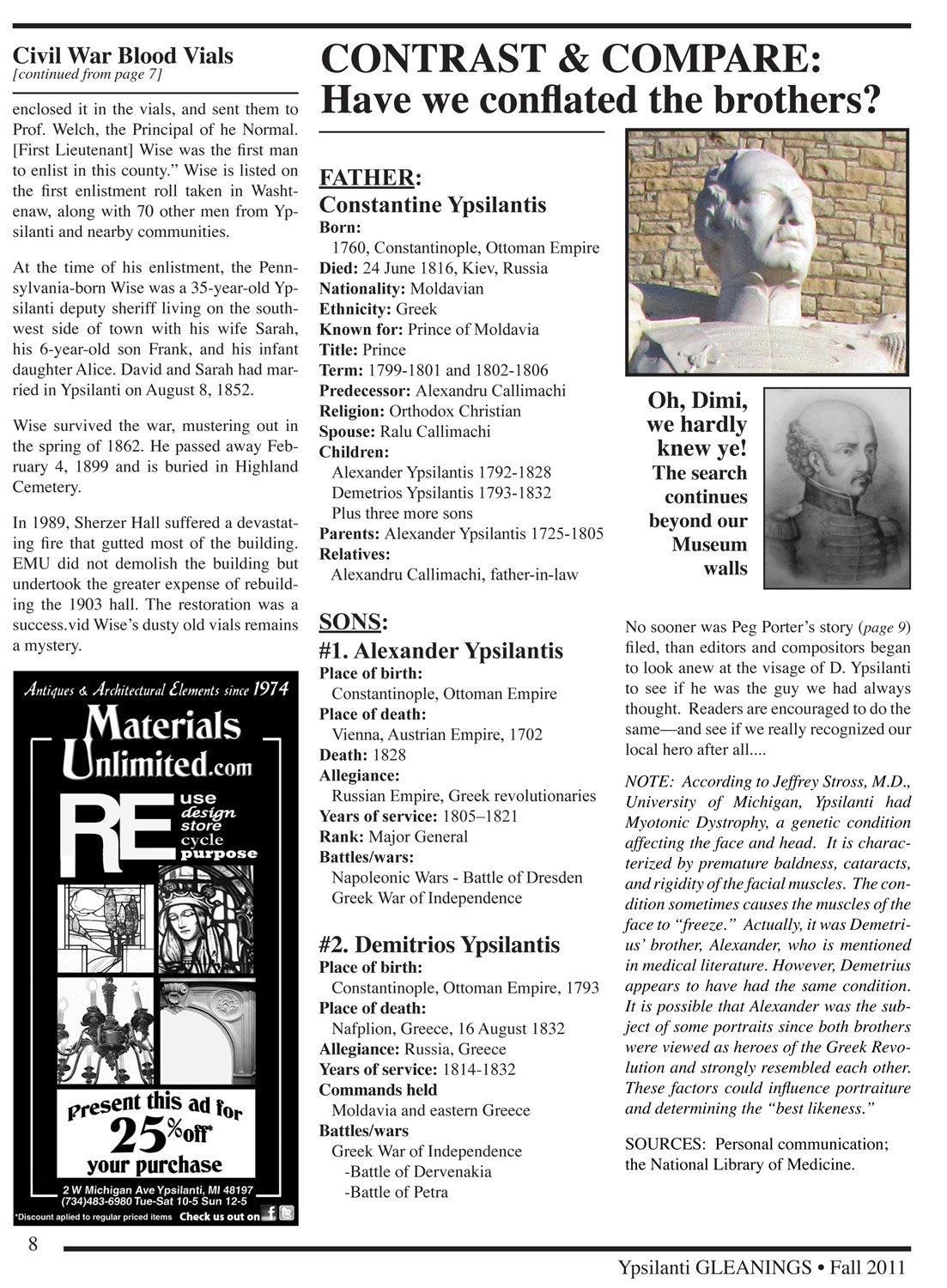 “Somewhere in the attic of the science building (now Sherzer Hall) on the Normal College campus there should be two bottles, one containing blood-saturated coal cinders and the other containing the remains of whole blood, the first shed in the Civil War.” In the spring of 1951, Mrs. E. H. Lamb brought a yellowed newspaper clipping into the offices of the Ypsi Daily Press. She’d found it in a book where her mother had placed it. The clipping contained information so unusual that the Press ran a front-page story. The bottles, the Press article reported, were from a Civil War confrontation in Alexandria, Virginia, on May 28, 1861. Shortly after Virginia seceded, Union troops entered Alexandria, including members of the 1st Michigan Regiment commanded by Orlando Wilcox and the 11th New York Regiment commanded by Colonel Elmer Ellsworth. Ellsworth spotted a large Confederate flag on the roof of Alexandria’s Marshall House Inn. He entered the inn and cut down the flag. On his way downstairs, he was shot by James Jackson, the hotel’s proprietor - who was himself shot by Corporal Francis Brownell. The New York and Michigan soldiers there were mindful of the event’s historic gravity. They cut up the blood-soaked stair runner and chipped pieces from the stained stairway as souvenirs. Today a piece of the Confederate flag that Ellsworth removed is in the Smithsonian. “No one on the campus knows how the vials appeared at the college,” reported the 1951 Press article. The vials were said to contain samples of spilled blood from both Jackson and Ellsworth. “(I)t is assumed that some alumnus or friend, who was a member of the First Michigan Infantry at that time, sent them.” Perhaps it was Brownell himself. After the war, Brownell became a federal pension examiner, whose work involved travel. In November of 1885, he visited Ypsilanti. “At the Follett House (a Depot Town hotel) was Francis E. Brownell, who avenged the death of Col. Ellsworth at the Marshall House in Alexandria, Va.,” read a November story in the 1885 Ypsilanti Commercial, adding that he was here on official business. Had Brownell donated the blood vials at that time, it seems likely that the Normal News student newspaper would have commented on the event. The October 1885 through February 1886 issues do not mention the vials. The chatty “Locals” column, however, printed other important news tidbits. “Gum!” announced the October 1885 issue. “All the rage. Girls can not talk enough, so [they] resort to gum that they may exercise their jaws.” In 1885 the college had a motley collection of bones, preserved specimens, antlers, and other bric-a-brac that it called a natural science museum. The December 1885 Normal News noted some recent acquisitions to the museum: skeletons of a frog, snake, and fish, some corals and shells, and a number of prepared bird skins, one from a hawk that measured forty-seven inches from wingtip to wingtip. The paper made no mention of the blood vials. If not Brownell but another member of the Michigan contingent in Alexandria donated the vials, when might that person have done so? One likely time could have been spring of 1894. Brownell died March 15, 1894, and the newspaper clipping presented to the Press was written on the occasion of his death. The clipping was from an unknown, non-local paper, but it may be the vials were donated in his memory. Once again the Normal News is silent on the subject, though 1894 issues continued to post updates on the ever-expanding museum collection. “Several hundred mosses and liverworts have also been added . . . Prof. Macoun generously added a package of ferns and lycopods.” Other additions included sedges and catkins. The final place in history in which to rummage around for the blood vials is February of 1951, when the Press story ran. One would think that the Normal News would investigate the story, but the next issue that came out following the Press story doesn’t mention it. The lead story revealed that celebrated jazz drummer Gene Krupa would perform at the upcoming J-Hop dance. Following issues are also mum. By 1951, the onetime museum had been forgotten. Upon receiving the old clipping, the Press had quizzed Dr. Clarence Loesell, then the director of EMU science programs. Loesell told the Press he had no idea about any such onetime museum. Somewhere in time, the tusks, skulls, shells, and liverworts had disappeared, as had, for nearly a century, the name of the vial-donor. A final search around the most likely date of the old newspaper clipping, Brownell’s death in the spring of 1894, finally solves the mystery, in an April 6, 1894 Ypsilanti Commercial article. “It was David A. Wise . . . who sent to the Normal, thirty-three years ago, the bottles containing blood of Col. Ellsworth and his slayer Jackson. He says he scraped up the blood from the floor, after the bodies had been removed, enclosed it in the vials, and sent them to Prof. Welch, the Principal of he Normal. [First Lieutenant] Wise was the first man to enlist in this county.” Wise is listed on the first enlistment roll taken in Washtenaw, along with 70 other men from Ypsilanti and nearby communities. At the time of his enlistment, the Pennsylvania-born Wise was a 35-year-old Ypsilanti deputy sheriff living on the southwest side of town with his wife Sarah, his 6-year-old son Frank, and his infant daughter Alice. David and Sarah had married in Ypsilanti on August 8, 1852. Wise survived the war, mustering out in the spring of 1862. He passed away February 4, 1899 and is buried in Highland Cemetery. In 1989, Sherzer Hall suffered a devastating fire that gutted most of the building. EMU did not demolish the building but undertook the greater expense of rebuilding the 1903 hall. The restoration was a success.vid Wise’s dusty old vials remains a mystery. Photo 1: Only recently scanned by George Ridenour from a glass-plate negative at the Ypsilanti Archives and never before published, this photo offers a rare glimpse of part of the onetime “museum” in today’s Sherzer Hall, where the mysterious blood vials were thought to be stored--they may even be visible in this picture