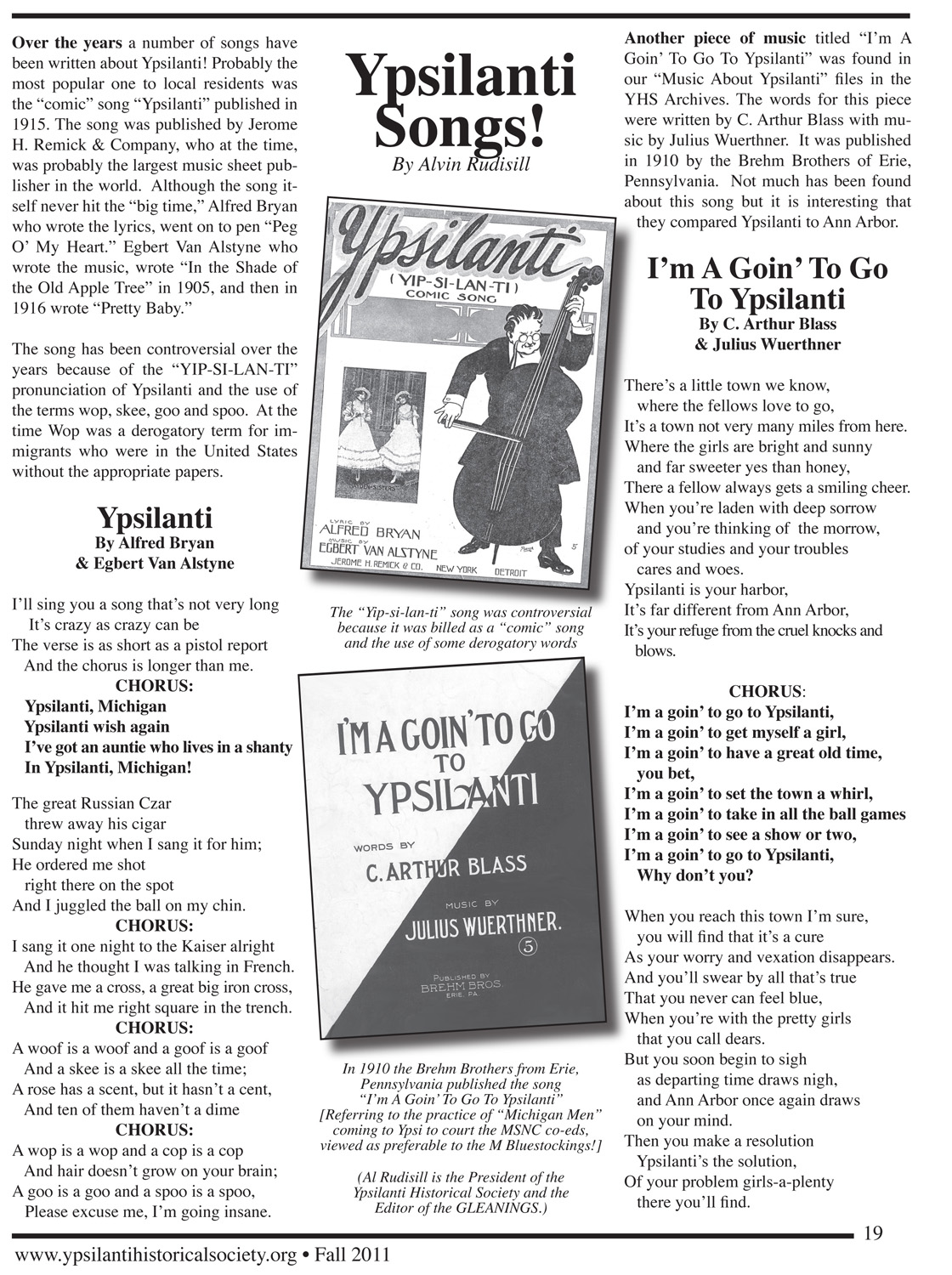 Over the years a number of songs have been written about Ypsilanti! Probably the most popular one to local residents was the “comic” song “Ypsilanti” published in 1915. The song was published by Jerome H. Remick & Company, who at the time, was probably the largest music sheet publisher in the world. Although the song itself never hit the “big time,” Alfred Bryan who wrote the lyrics, went on to pen “Peg O’ My Heart.” Egbert Van Alstyne who wrote the music, wrote “In the Shade of the Old Apple Tree” in 1905, and then in 1916 wrote “Pretty Baby.” The song has been controversial over the years because of the “YIP-SI-LAN-TI” pronunciation of Ypsilanti and the use of the terms wop, skee, goo and spoo. At the time Wop was a derogatory term for immigrants who were in the United States without the appropriate papers. Ypsilanti By Alfred Bryan & Egbert Van Alstyne I’ll sing you a song that’s not very long It’s crazy as crazy can be The verse is as short as a pistol report And the chorus is longer than me. CHORUS: Ypsilanti, Michigan Ypsilanti wish again I’ve got an auntie who lives in a shanty In Ypsilanti, Michigan! The great Russian Czar threw away his cigar Sunday night when I sang it for him; He ordered me shot right there on the spot And I juggled the ball on my chin. CHORUS: I sang it one night to the Kaiser alright And he thought I was talking in French. He gave me a cross, a great big iron cross, And it hit me right square in the trench. CHORUS: A woof is a woof and a goof is a goof And a skee is a skee all the time; A rose has a scent, but it hasn’t a cent, And ten of them haven’t a dime CHORUS: A wop is a wop and a cop is a cop And hair doesn’t grow on your brain; A goo is a goo and a spoo is a spoo, Please excuse me, I’m going insane. Another piece of music titled “I’m A Goin’ To Go To Ypsilanti” was found in our “Music About Ypsilanti” files in the YHS Archives. The words for this piece were written by C. Arthur Blass with music by Julius Wuerthner. It was published in 1910 by the Brehm Brothers of Erie, Pennsylvania. Not much has been found about this song but it is interesting that they compared Ypsilanti to Ann Arbor. I’m A Goin’ To Go To Ypsilanti By C. Arthur Blass & Julius Wuerthner There’s a little town we know, where the fellows love to go, It’s a town not very many miles from here. Where the girls are bright and sunny and far sweeter yes than honey, There a fellow always gets a smiling cheer. When you’re laden with deep sorrow and you’re thinking of the morrow, of your studies and your troubles cares and woes. Ypsilanti is your harbor, It’s far different from Ann Arbor, It’s your refuge from the cruel knocks and blows. CHORUS: I’m a goin’ to go to Ypsilanti, I’m a goin’ to get myself a girl, I’m a goin’ to have a great old time, you bet, I’m a goin’ to set the town a whirl, I’m a goin’ to take in all the ball games I’m a goin’ to see a show or two, I’m a goin’ to go to Ypsilanti, Why don’t you? When you reach this town I’m sure, you will find that it’s a cure As your worry and vexation disappears. And you’ll swear by all that’s true That you never can feel blue, When you’re with the pretty girls that you call dears. But you soon begin to sigh as departing time draws nigh, and Ann Arbor once again draws on your mind. Then you make a resolution Ypsilanti’s the solution, Of your problem girls-a-plenty there you’ll find. PHOTO CAPTIONS:
Picture 1: The “Yip-si-lan-ti” song was controversial because it was billed as a “comic” song
and the use of some derogatory words

Picture 2: In 1910 the Brehm Brothers from Erie, Pennsylvania published the song “I’m A Goin’ To Go To Ypsilanti”[Referring to the practice of “Michigan Men” coming to Ypsi to court the MSNC co-eds, viewed as preferable to the M Bluestockings!]

(Al Rudisill is the President of the Ypsilanti Historical Society and the Editor of the GLEANINGS.)