Brayton Mausoleum was First in the County 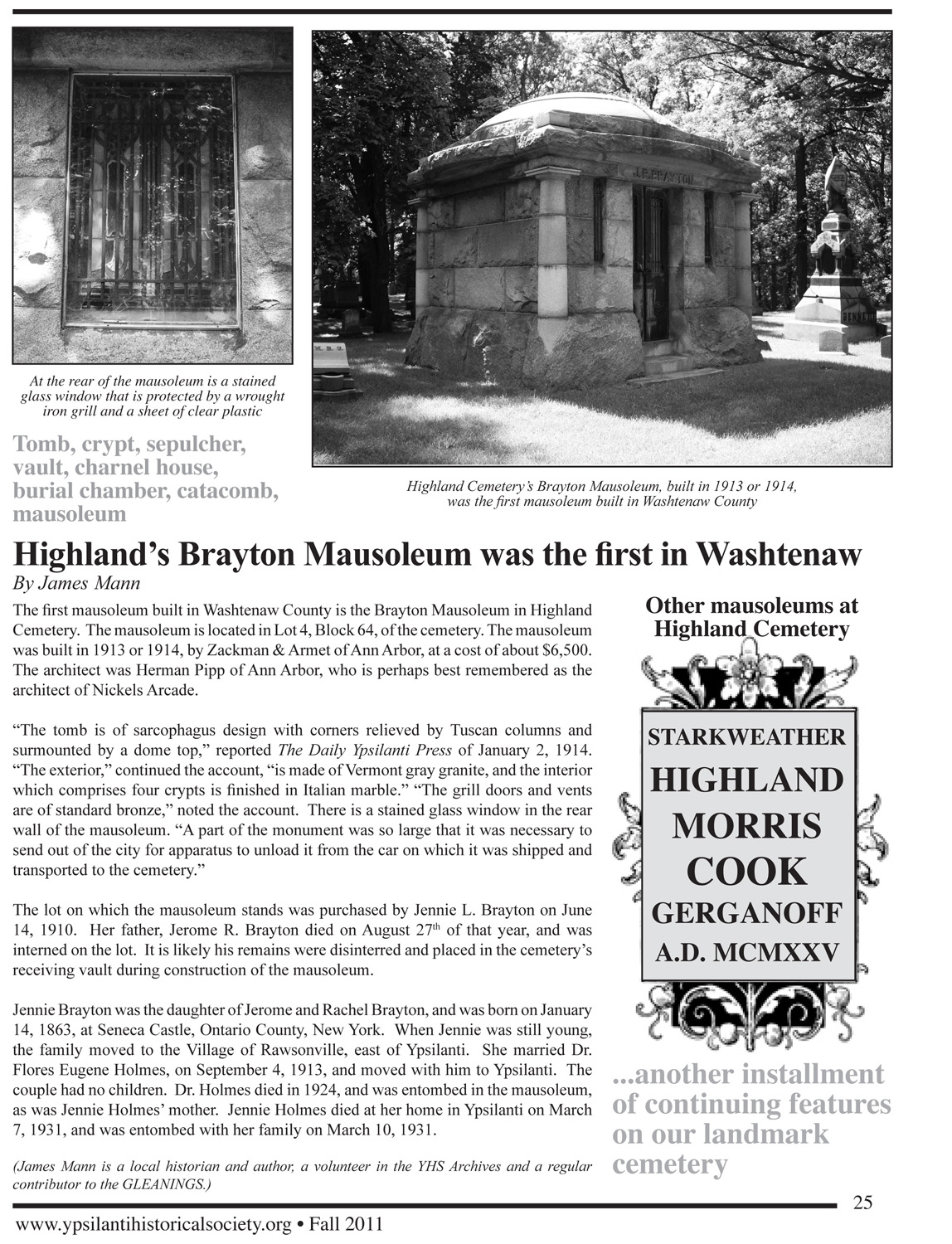 The first mausoleum built in Washtenaw County is the Brayton Mausoleum in Highland Cemetery. The mausoleum is located in Lot 4, Block 64, of the cemetery. The mausoleum was built in 1913 or 1914, by Zackman & Armet of Ann Arbor, at a cost of about $6,500. The architect was Herman Pipp of Ann Arbor, who is perhaps best remembered as the architect of Nickels Arcade. “The tomb is of sarcophagus design with corners relieved by Tuscan columns and surmounted by a dome top,” reported The Daily Ypsilanti Press of January 2, 1914. “The exterior,” continued the account, “is made of Vermont gray granite, and the interior which comprises four crypts is finished in Italian marble.” “The grill doors and vents are of standard bronze,” noted the account. There is a stained glass window in the rear wall of the mausoleum. “A part of the monument was so large that it was necessary to send out of the city for apparatus to unload it from the car on which it was shipped and transported to the cemetery.” The lot on which the mausoleum stands was purchased by Jennie L. Brayton on June 14, 1910. Her father, Jerome R. Brayton died on August 27th of that year, and was interned on the lot. It is likely his remains were disinterred and placed in the cemetery’s receiving vault during construction of the mausoleum. Jennie Brayton was the daughter of Jerome and Rachel Brayton, and was born on January 14, 1863, at Seneca Castle, Ontario County, New York. When Jennie was still young, the family moved to the Village of Rawsonville, east of Ypsilanti. She married Dr. Flores Eugene Holmes, on September 4, 1913, and moved with him to Ypsilanti. The couple had no children. Dr. Holmes died in 1924, and was entombed in the mausoleum, as was Jennie Holmes’ mother. Jennie Holmes died at her home in Ypsilanti on March 7, 1931, and was entombed with her family on March 10, 1931. (James Mann is a local historian and author, a volunteer in the YHS Archives and a regular contributor to the GLEANINGS.) PHOTO CAPTIONS: Photo 1: At the rear of the mausoleum is a stained glass window that is protected by a wrought iron grill and a sheet of clear plastic

Photo 2: Highland Cemetery’s Brayton Mausoleum, built in 1913 or 1914, was the first mausoleum built in Washtenaw County