The Ypsilantis: Constantine, Alexander, and Demetrius 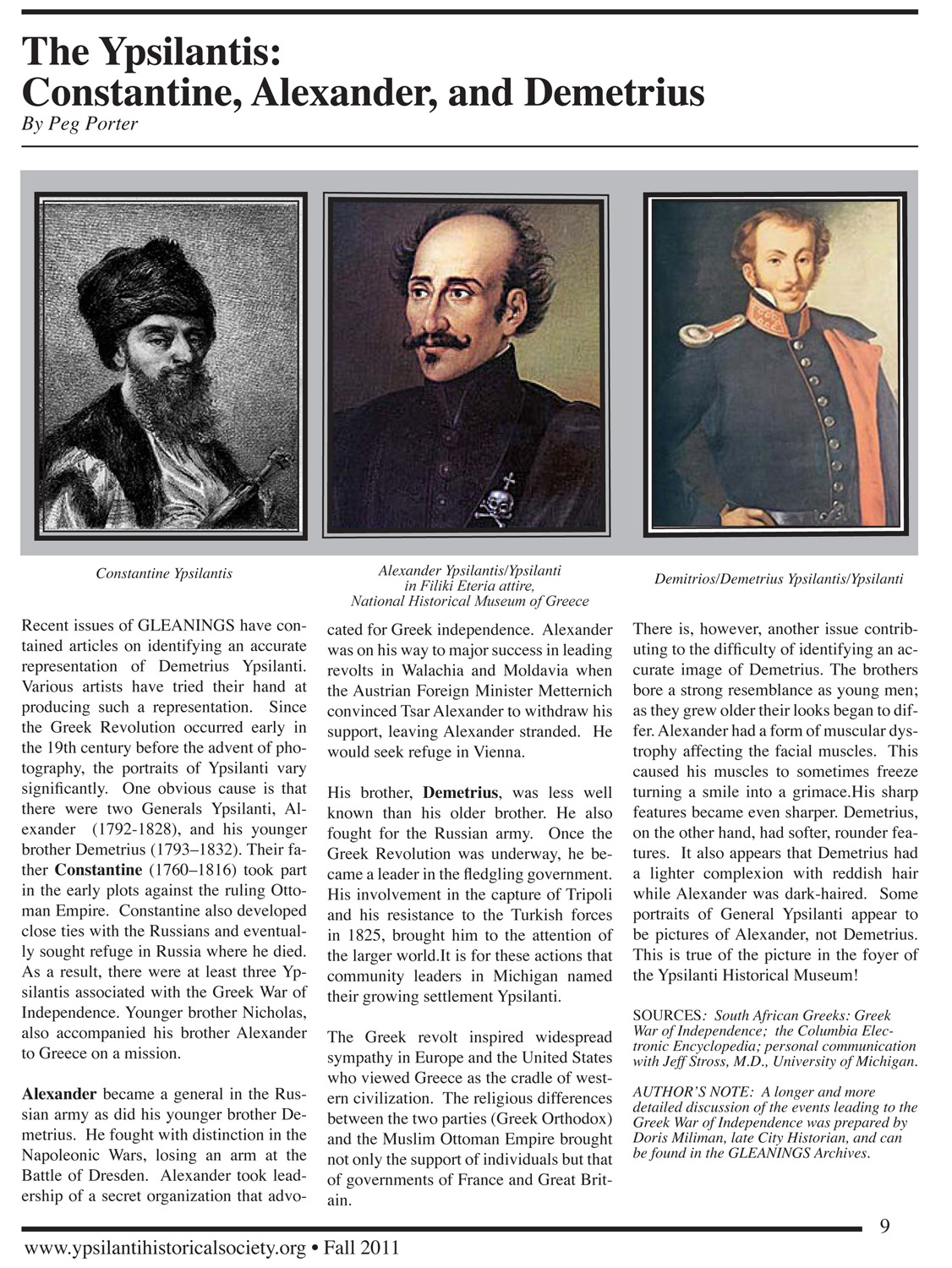 Recent issues of GLEANINGS have contained articles on identifying an accurate representation of Demetrius Ypsilanti. Various artists have tried their hand at producing such a representation. Since the Greek Revolution occurred early in the 19th century before the advent of photography, the portraits of Ypsilanti vary significantly. One obvious cause is that there were two Generals Ypsilanti, Alexander (1792-1828), and his younger brother Demetrius (1793–1832). Their father Constantine (1760–1816) took part in the early plots against the ruling Ottoman Empire. Constantine also developed close ties with the Russians and eventually sought refuge in Russia where he died. As a result, there were at least three Ypsilantis associated with the Greek War of Independence. Younger brother Nicholas, also accompanied his brother Alexander to Greece on a mission. Alexander became a general in the Russian army as did his younger brother Demetrius. He fought with distinction in the Napoleonic Wars, losing an arm at the Battle of Dresden. Alexander took leadership of a secret organization that advocated for Greek independence. Alexander was on his way to major success in leading revolts in Walachia and Moldavia when the Austrian Foreign Minister Metternich convinced Tsar Alexander to withdraw his support, leaving Alexander stranded. He would seek refuge in Vienna. His brother, Demetrius, was less well known than his older brother. He also fought for the Russian army. Once the Greek Revolution was underway, he became a leader in the fledgling government. His involvement in the capture of Tripoli and his resistance to the Turkish forces in 1825, brought him to the attention of the larger world.It is for these actions that community leaders in Michigan named their growing settlement Ypsilanti. The Greek revolt inspired widespread sympathy in Europe and the United States who viewed Greece as the cradle of western civilization. The religious differences between the two parties (Greek Orthodox) and the Muslim Ottoman Empire brought not only the support of individuals but that of governments of France and Great Britain. There is, however, another issue contributing to the difficulty of identifying an accurate image of Demetrius. The brothers bore a strong resemblance as young men; as they grew older their looks began to differ. Alexander had a form of muscular dystrophy affecting the facial muscles. This caused his muscles to sometimes freeze turning a smile into a grimace.His sharp features became even sharper. Demetrius, on the other hand, had softer, rounder features. It also appears that Demetrius had a lighter complexion with reddish hair while Alexander was dark-haired. Some portraits of General Ypsilanti appear to be pictures of Alexander, not Demetrius. This is true of the picture in the foyer of the Ypsilanti Historical Museum! SOURCES: South African Greeks: Greek War of Independence; the Columbia Electronic Encyclopedia; personal communication with Jeff Stross, M.D., University of Michigan. AUTHOR’S NOTE: A longer and more detailed discussion of the events leading to the Greek War of Independence was prepared by Doris Miliman, late City Historian, and can be found in the GLEANINGS Archives.

SIDEBAR: CONTRAST & COMPARE: Have we conflated the brothers? FATHER: Constantine Ypsilantis Born: 1760, Constantinople, Ottoman Empire Died: 24 June 1816, Kiev, Russia Nationality: Moldavian Ethnicity: Greek Known for: Prince of Moldavia Title: Prince Term: 1799-1801 and 1802-1806 Predecessor: Alexandru Callimachi Religion: Orthodox Christian Spouse: Ralu Callimachi Children: Alexander Ypsilantis 1792-1828 Demetrios Ypsilantis 1793-1832 Plus three more sons Parents: Alexander Ypsilantis 1725-1805 Relatives: Alexandru Callimachi, father-in-law SONS: #1. Alexander Ypsilantis Place of birth: Constantinople, Ottoman Empire Place of death: Vienna, Austrian Empire, 1702 Death: 1828 Allegiance: Russian Empire, Greek revolutionaries Years of service: 1805–1821 Rank: Major General Battles/wars: Napoleonic Wars - Battle of Dresden Greek War of Independence #2. Demitrios Ypsilantis Place of birth: Constantinople, Ottoman Empire, 1793 Place of death: Nafplion, Greece, 16 August 1832 Allegiance: Russia, Greece Years of service: 1814-1832 Commands held Moldavia and eastern Greece Battles/wars Greek War of Independence -Battle of Dervenakia -Battle of Petra Oh, Dimi, we hardly knew ye! The search continues beyond our Museum walls No sooner was Peg Porter’s story (page 9) filed, than editors and compositors began to look anew at the visage of D. Ypsilanti to see if he was the guy we had always thought. Readers are encouraged to do the same––and see if we really recognized our local hero after all.... NOTE: According to Jeffrey Stross, M.D., University of Michigan, Ypsilanti had Myotonic Dystrophy, a genetic condition affecting the face and head. It is characterized by premature baldness, cataracts, and rigidity of the facial muscles. The condition sometimes causes the muscles of the face to “freeze.” Actually, it was Demetrius’ brother, Alexander, who is mentioned in medical literature. However, Demetrius appears to have had the same condition. It is possible that Alexander was the subject of some portraits since both brothers were viewed as heroes of the Greek Revolution and strongly resembled each other. These factors could influence portraiture and determining the “best likeness.” SOURCES: Personal communication; the National Library of Medicine.