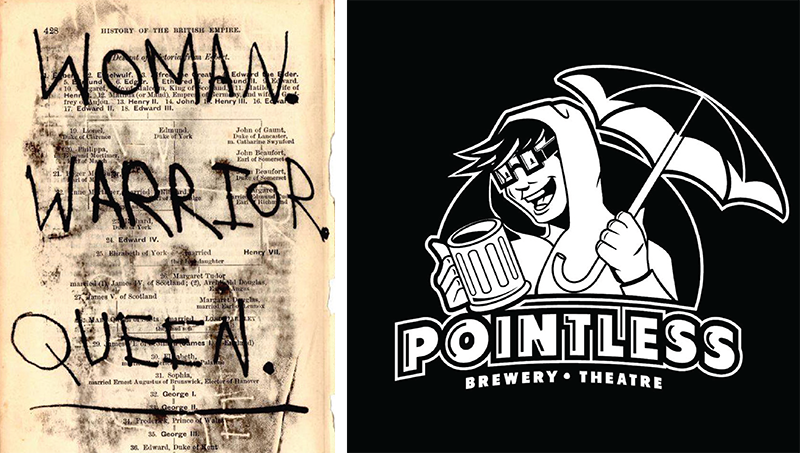 An evening of pointless HERsay.

When Patti Smith emailed Pointless Brewery & Theatre Co-founder Tori Tomalia last year to find out if she could collaborate with the venue to hold HERsay there, she expected Tomalia to be skeptical, or at least questioning. But Tomalia was gung-ho for the event right away and the evening of storytelling, comedy, improvisation, theater, and visual art show’n’tell—all created and performed by women—debuted this past Thursday evening for a sold out crowd. Smith was inspired to create HERsay when she heard the story of a former SNL cast member who claimed “women can’t be funny.” She felt that women could most certainly be funny, and wanted to provide an opportunity for women to be heard with the HERsay event, which she now hopes will become an annual celebration of women and the art that they create. This year, half of the proceeds from ticket sales were donated to Planned Parenthood.

HERsay featured twenty different women performers with a range of ages, backgrounds and experience. The best part of the event was the diversity of performances and the emotional ups and downs that each performer created with their work. Jenn McKee delighted the crowd by reading excerpts from her middle school diary, in which she “got in touch with her early nihilism.”

Patricia Wheeler, local coordinator of the Ann Arbor and Detroit Moth StorySLAMs, followed McKee with a heartbreaking story of her fiancè’s suicide that left much of the audience in tears.

Artist Debra Golden displayed her gorgeous paintings of a single street in northeast Detroit, near Martin Park. The houses on the street ranged from multimillion dollar mansions (some now in disrepair) to a tiny 900-square-foot ranch at the end of the block. As Golden shared her memories of Detroit in the 1960s and 1970s, many audience members nodded along, shouting out memories of their own, of roller coasters on Boblo Island and of the Lodge slicing neighborhoods in half.

Later in the evening, Jean Leverich performed a riveting piece about a woman dying of cancer who tries marijuana for the first time in an attempt to ease her pain. She’s delighted by the experience, and Leverich’s stunning depiction of the joy and sorrow that the woman experiences was heart-wrenching.

This writer also particularly enjoyed performance poet Callie McKee, who performed two of her pieces for the HERsay audience. Her witty turns of phrase and animated stage presence were captivating. Her first piece, about preparation, left the audience smiling with the final message that there are some things we simply can’t be prepared for, no matter how hard we try. Her second—and very timely—piece dealt with a “distinctive lack of Hillary,” in the days after the election. Omnipresent in the news in recent months as she ran for president, McKee talked about her surprise after the election when she woke up and Clinton was virtually gone.

A multitude of other storytellers, comics, and artists performed at HERsay, coming together to create a warm, welcoming and positive environment for both the audience and the performers themselves. Pointless Brewery, which opened earlier this year, offered an intimate, friendly venue for the show, the only drawback being its small size—tickets sold out quickly. If the success of Thursday’s show is any indicator, Smith’s dream of HERsay becoming an annual event will surely come to fruition, perhaps on an even grander scale next year.

Elizabeth Pearce is a Library Technician at the Ann Arbor District Library who is much too mortified to revisit her own middle school diary.