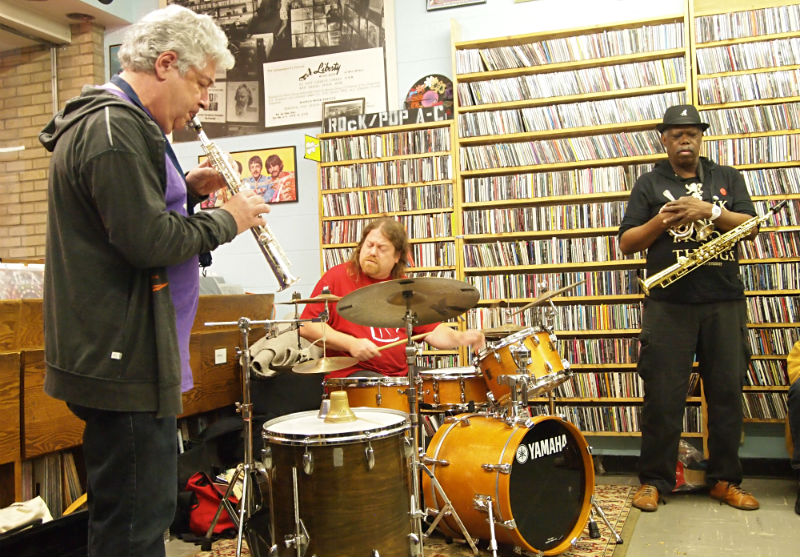 As free-jazz hero Joe McPhee got started on the third movement of Tuesday night's Fringe at the Edge concert at Encore Records, he settled into a minimalist, two-beat groove that was sometimes barely audible.

While McPhee patted his palm against the mouthpiece of his pocket trumpet, drummer Andrew Drury fell in, lightly tapping skins, rims, and cymbals for a nervous, anti-beat.

Piotr Michalowski held his sopranino saxophone and listened a moment, then completed the percussive theme by popping and puffing through his horn, before the trio opened up into long-toned exuberance. When it was over, Drury made Michalowski jump and then grin, as he frantically bowed away at some metal for a screeching effect.

Announcing the band members between numbers, Edgefest organizer Deanna Relyea shared that the visiting McPhee and Drury would be up early Wednesday morning to teach music students at Scarlett Middle School. Ann Arborite Michalowski, Relyea's husband, would be up early too, she joked: "To clean the house."

If you've followed jazz or improvisational music in Ann Arbor at all for the last 20 or 30 years, you've probably run into, read something by, or seen and heard some mind-expanding reed work by Michalowski.

The improv-music-scene staple is a regular face at Kerrytown Concert House's avant-garde Edge events, including its annual Edgefest, which returns this week for the 21st edition (Oct. 18-21), where he also often plays as a scheduled performer or sits in with visiting musicians. He also writes a monthly music column for the Ann Arbor Observer.

While he can hang with players like Drury and McPhee ("Joe McPhee, you know, is God," he says), Michalowski, makes it clear he's a hobbyist when talking about his own music -- "a palette cleanser" from the academic rigor of his previous 9 to 5 as a professor of Near Eastern Studies at the University of Michigan.

Other than a few masterclasses on extended techniques, Michalowski is self-taught. He's played several reed instruments over the years, eventually focusing on bass clarinet, but baritone and soprano saxophone and sopranino are often in the mix.

"I guess I have the Vinny Golia disease, so that I'm a multi-instrumentalist," he says. "I don't really have a main horn." 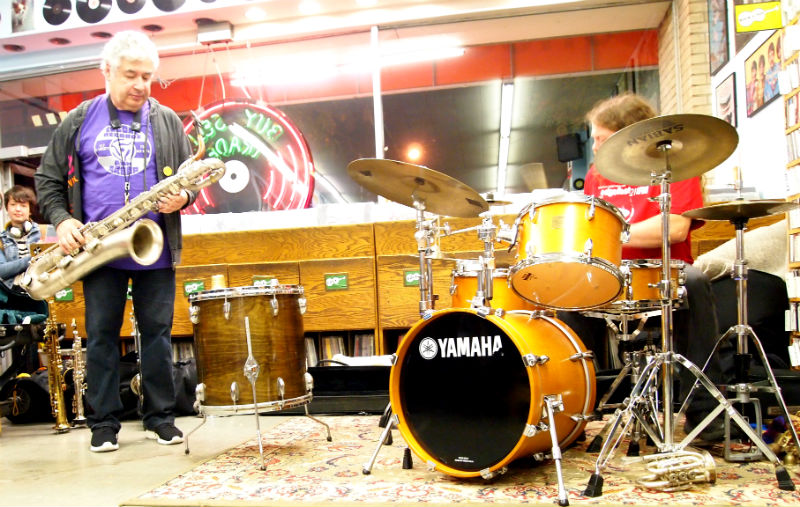 Piotr Michalowski is a reeds player -- no matter the instrument. He's shown here with a baritone sax. Photo by Eric Gallippo.

Michalowski grew up in Poland and moved to the United States in 1968 to earn his master's degree and Ph.D. at Yale University. After postgraduate research at Harvard and Penn, he took his first job at UCLA.

He'd been an avid jazz fan since he was a teenager -- he swore off rock 'n' roll after seeing the Jazz on a Summer's Day concert film -- but his tastes leaned more toward the old school, New Orleans-style than the new avant-garde.

In Los Angeles, Michalowski made friends with a record-store clerk who turned him onto some further-out sounds, including L.A. players the clerk also booked at the storied Century City Playhouse. There, Michalowski checked out gigs by adventurous improvisers, like John Carter, Nels Cline, and Golia, the last of whom inspired him to start playing clarinet.

"It was a fantastic scene," he says.

After a stint teaching in Philadelphia during which he didn't really play, Michalowski landed in Ann Arbor in the early '80s to work at the University of Michigan, where he continued to teach until just last year.

He took up music again at the urging of a friend and was soon playing traditional jazz, swing, and standards on alto and tenor sax, performing with David Swain's II-V-I Orchestra and jams with friends. He enjoyed the tunes, but it didn't feel right.

"I was playing 'Body and Soul' at some art place, and I just thought, 'It's totally ridiculous for me to play "Body and Soul."' I have in my head Coleman Hawkins and all these classic performers. It's almost sacrilegious for me to do it. While I love listening to that music, playing it was absurd. You could say playing as an amateur is absurd anyway, but I love doing it. That was just so crazy. I decided I was just making an ass of myself, and I just couldn't really justify it."

So, in the '90s, he turned back to his love of improvisation and found some like-minded, younger players at the University of Michigan and its Creative Arts Orchestra, who he started sitting in with. He collaborated regularly with James Ilgenfritz, Sarah Weaver, and "a whole generation" of musicians until they eventually left town to pursue their music.

Another longstanding collaborator for years was Detroit violinist Mike Khoury, with whom Michalowski has released a half-dozen or so short-run CDs. He's also continued to play with Ilgenfritz when the two are in the same city. In March, the two played as an impromptu trio with U-M music professor Stephen Rush during an Ilgenfritz show at Kerrytown Concert House, and earlier this month, Michalowski and Relyea, a mezzo-soprano vocalist, joined the bassist in Steve Swell's band for a New York performance.

Through Kerrytown and Detroit's free improvisation scene, Michalowski has made connections around the country that have developed into mini-tours with professional musicians and one-off shows in other cities when traveling for work.

He recalls one notable house show in Berkley, Calif., wiith Golia and Jon Raskin of the Rova Saxophone Quartet all playing sopraninos. "It was advertised as a very squeaky evening," he says.

When pianist Thollem McDonas was recruiting musicians to perform with at Kerrytown last summer, he asked Michalowski and Ann Arbor cellist Abigail Alwin to join him. McDonas recorded the session, which is now posted to Bandcamp as part of a 15-album series produced while touring.

"Piotr is such a joyful person, and it overflows into his playing," McDonas says. "He moves seamlessly from one instrument to another. (He has) profound respect for his fellow musicians (and) giant ears. He allows much space for others, (and) he can jump head first into any texture and dynamic."

Using those "giant ears" is a big part of the music's appeal for Michalowski.

"One of the great things about this music is it's truly in the moment and it's always collaborative in the sense you really have to listen," he says. "You're always sort of balancing. You're on top of a ball on one foot. You can always fall off and do something that's egregiously wrong."

While other forms of jazz and new music have made an art of working through complex harmonies, free improvisation, puts the focus on sound and timbre.

"When you're playing a reed instrument, it's an extension of your body, and you immerse yourself in these overtones and this sound and discover new ways of doing that," he says. "It's very intuitive."

He tells a story about avant-garde saxophonist Evan Parker leading a workshop where he told musicians to "make your entrance" count. It's something that's stuck with him over the years, and he's seen great players, like McPhee, do countless times by hanging back, listening, and then taking the music into a totally new direction.

"Good musicians will pick it up and move it," he says. "You have to pick up the cue immediately. When you get on the stand, you can't coast."

Eric Gallippo is an Ypsilanti-based freelance writer and a regular contributor to Concentrate Ann Arbor.

The 21st annual Edgefest is based out of Kerrytown Concert House, 415 N. 4th Ave., Oct. 18-21. For tickets, more info, and visit kerrytownconcerthouse.com.

All the shows listed below are at the Concert House unless otherwise noted: