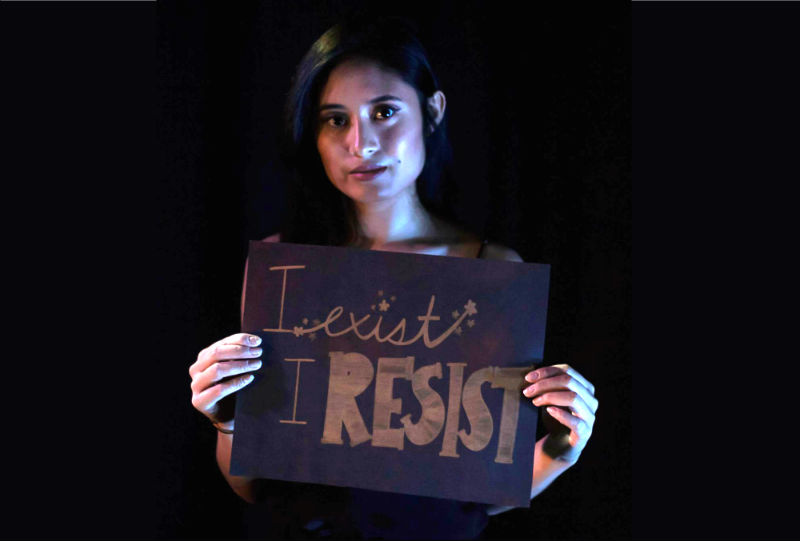 Kyla Cano, a junior at U-M majoring in screen arts and cultures and communication studies, was one of the speakers at Resistance. Photo by Hannah Qin from Yoni Ki Baat's Facebook page.

On March 9 and March 10, Yoni Ki Baat, an organization that seeks to educate the campus about the issues pertaining to South Asian women and all women of color, produced Resistance, a show inspired by Eve Ensler’s Vagina Monologues.

In fact, Yoni Ki Bat is Sanskrit for “talks of the vagina.”

Worry #1: How do you make sure that you’re writing a piece that is respectful that doesn’t inadvertently contribute to the erasure of other people’s experiences?

Attending this event made me realize how weird it is these days for me to be in a room outside of my own home that is mostly people of color. It’s even weirder when I am a minority among a large group of other non-white people. I can’t recall the last time that this was true. That evening it seems every shade of brown that human skin comes in was represented in Rackham Auditorium. That’s as far as this description goes; I don’t mess around with guessing at other people’s races and ethnicities willy-nilly.

Student 1: Do you own Uggs now?
Student 2: No! These are Bearpaws.

Resistance, a clear reference to the 2017 “Nevertheless, she persisted,” moment that occurred in the U.S. Senate, was Yoni Ki Baat’s 11th annual monologue show.  The theme was inspired by women of color, standing up and leading, and stating that they can and will take up space. The organization invited audience members to challenge themselves and learn. They also warned, “You yourself might be called out on your behavior.” This immediately reminded me that I was in a college space. A read through the program indicated that the two performances of the show weren’t identical, with some monologues performed one night but not the other. The program also provided context for some of the poems in the form of a glossary. Neither photography nor recordings were permitted during the performance; the audience was encouraged to respect that these were personal stories that were shared.

If part of the point of the show was to illustrate upon the Rackham stage that this group have had their own individual unique experiences, they did a good job of it. There was a monologue about the role of hair and the freedom that came when one woman cut her's short. An anonymous contributor wrote a piece about a woman who found herself in relationships with abusive men -- men like her father.  Many pieces explored cultural pride. One woman talked about what it is like to suffer through a sickle cell anemia attack, feeling invisible in the moment of the crisis despite usually feeling hyper-visible in many of her classes.

Throughout the evening, as performers exited the stage to be replaced by another, there were small acts of camaraderie among them, a fist bump, a hug, a little dance. This was one way the performers communicated that they had created a community. Each of the performers wore a black shirt, but they all styled the garment differently. Some of them wore this long-sleeved black T-shirt just as it had come out of the box. Other women cut slashes in their's or turned them into tank tops or crop tops. The different ways they styled their shirts seemed not just a representation of their individual styles but also a visual reminder that even things have something in common can be interpreted or transformed in vastly different ways.

Many of the pieces touched on relationships. One piece specifically talked guys, dating, intimacy, communication, and being ghosted. Other relationship stories touched on topics such as date rape and other abuses. In fact, four of the content warnings in the show were for some degree of sexual assault. The audience grew quiet during those moments and I remembered just how often date rape comes up on college campuses.

Worry #2: What is the correct response to the urge to use the term “universal themes” when describing an event like this one? When you say universal in a context like this, it’s weird. It low-key suggests it must be stated that, in this case, women of color have universal experiences. Of course they do. That’s what it means to be a person.

Another topic that doesn't come up in my post-classroom day-to-day life is colonialism. This show made me realize that this is, in part, because of my surroundings, the people that I surround myself with, my circle. Here, it came up accompanied by questions of what it means to have a faith that is a direct result of colonialism and what it's like to have the colonizer’s mother tongue come from your own mouth as a direct result of your forebears being "civilized."

Resistance escorted the audience through several expressions of what it means to be a woman of color. Sometimes, your appearance is saying things about you that don’t add up or aren’t true. Sometimes you’re signaling through your clothing and other choices who you are. Sometimes you attempt to sound “more white on the phone” in order to accomplish what needs to be done. Sometimes you do everything in your power to be normal -- i.e., not being the woman of color you are. Other times, however, none of these things are true. There is resistance in any and all of it. Sometimes.

Resistance argues that for these women of color, to exist is to resist.

Student # 3: Do you guys want to come over for dosa chaat? I have to get rid of it before my mom comes over.