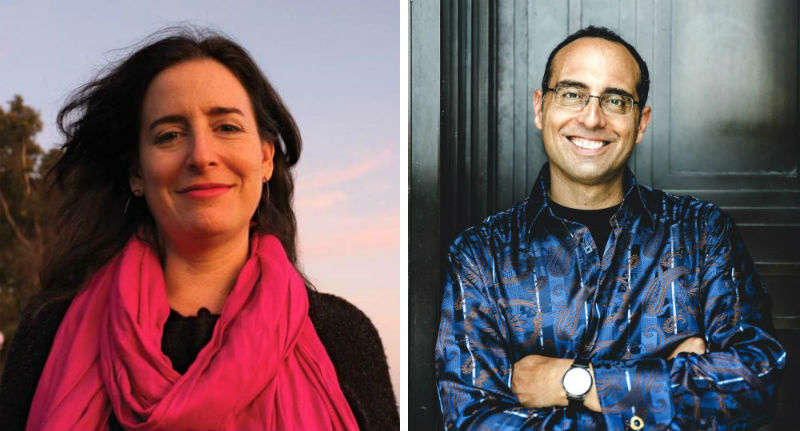 Aimee Bender holds a special place in my heart.

Several years ago, I found myself thinking about Bender's work, a story of hers that I remembered. I took to the internet, looking for the name of the story; instead, I found someone’s dating profile, someone who also adored Bender’s writing.

I was sucked in, reading every detail.

I followed that girl.

With this in mind, when I learned Aimee Bender would be speaking at UMMA as a part of the Zell Visiting Writers Series alongside poet Philip Metres on November 15, I knew that I, again, would follow that girl.

I had never considered what Bender’s voice would sound like. I had never so much glanced at the author photo on one of her books’ lapels.  I could see her sparkling earring from where I was sitting. I contemplated her humanness for the first time as she read her short story “The Doctor and the Rabbi.”

“The rabbi came for many transfusions, and she recovered at a brisk pace, filled with the blood of Hindus and Lutherans.” --from “The Doctor and the Rabbi”

This was a story I had read before, maybe more than once.  I sat back to listen to it, considering how reading a story and listening to it feels like two very different activities. I scanned the rapt room and wondered when exactly I lost my own desire to write fiction. Bender’s story about faith and reason wrapped me up in the details of everyday life, the layers that exist in our interactions with other people. She reminded me how fiction can tell truths.

The story made the audience laugh a few times, but never during the moments I found funny. How do people enjoy the same story in different ways? Why are they laughing audibly and I alone in my head? Clearly, the people who came together to be in that room that evening had something in common, but how did a difference in how they punctuated the event heighten my perception of the differences among us?

There is a line in the story that distracted me:

He got home and looked through the mail, and he had driven past the drive-through, so instead he sent out for a meatball sandwich, which he ate in pieces, because it was too unwieldy to eat all at once, and even the bread he cut into bite-sized parts. He could feel it, just feel it, the glimmer of something that he did not understand.

My notes from the evening say something about an unwieldy meatball. That is the magic of fiction, using such an image to move us, to make meaning.

“The idea that information itself can cover over other voices is disturbing to me.” --Philip Metres

Philip Metres took the stage after Bender, following her prose with his poetry. Metres invited three students to help him read one of his poems. They huddled together on the stage as we watched and waited. At that moment, he looks like a teacher, a dad. My mind took a side trip, pondering how lately I feel like most people that I meet look like a combination of other people I’ve met. Metres physically reminded me of a mix of someone I went to college with, an ex-boyfriend, and a former teacher. This is the sort of thing that would make a child version of me think that we’re all made from a big factory of parts, sort of like a Mr. Potato Head, and moments like this prove it.

The quartet reclaimed my attention, reading a poem, a cacophony of voices. As a viewer, I almost felt as if the words were Mardi Gras beads that I was trying to catch. Do you just try to catch what you can? Do you concentrate on a singular goal and pursue that? Do you just try to enjoy the spectacle?

Some of Metres’ poetry was about the torture that took place in the Abu Ghraib prison in Iraq. He explained that instead of basing this work on the photographs, he based it off testimony he read about experiences in the prison, noting that photographs can continue that torture. The difficulty that he had in reading some of this work was audible in his voice as he spoke. I wondered what it was to steep oneself in this testimony enough to make enough meaning of it to create work around it.

When he asked the audience what music they would employ should they choose to torture someone, silence followed.  Was it fear silence? Shame silence? Days later, I still don’t know how to answer that question. But that evening, on the other side of a pause, a few answers were offered. One audience member said “country music,” another said “Kid Rock.” Metres then stated that some of the music that was used for torture in Guantánamo Bay was heavy metal, but also that the theme songs from Barney and Sesame Street were used. He contemplated what it means that songs used to entertain children are the same songs used to drive adults mad.

That poem was the most disturbing poem I ever heard read aloud.

That poem also led me to purchase Metres’ book Sand Opera. The title page lets you know that this is a work that requires work from you. You see that Sand Opera -- this title that evokes a place, the desert, and wars in Iraq and Afghanistan -- is created by redacting parts of a larger text. Lower on the page, we see that the larger text is: “Standard Operating Procedure.”

Right there before we even get to page one, the reader must reckon that the terrible things we are to read about happen all of the time. The reader must know that at this very moment somewhere there is a torturer torturing the tortured. That they are both having lives, experiences; that they are both what it means to be human. In his book, Metres wrestles with language or dances with it to give form to those experiences in a book.

Here, I am stricken by the thought that what is unwieldy is our humanity.

That is the magic of poetry.